Over the years we’ve all heard the dire predictions of snow becoming a thing of the past and that especially in the Alps the ski industry would in large part disappear. Warmer temperatures would put an end to snow as we know it.

Yet an analysis of the data tells a very different story, according to Austrian ski industry researcher Günther Aigner in a video presentation dubbed: Will the Arlberg see snow disappear? An analysis of historical temperature and snow datasets:

Yet these bold prognoses are now proving to be deceptive at best, and bordering on outright fraud at worst. 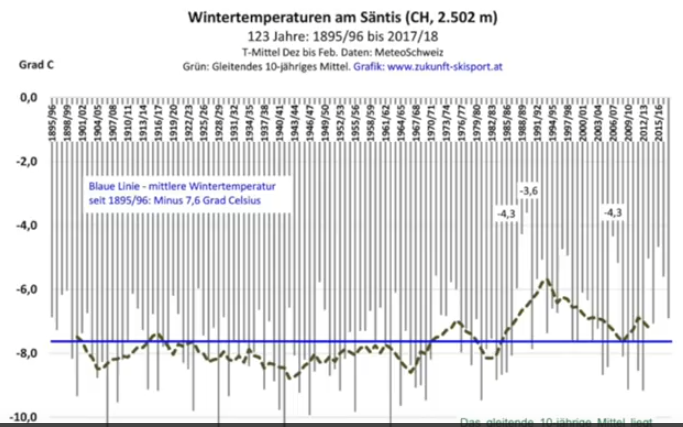 Though we see that ther overall trend since the 1940s has been upwards, the trend over the past 30 years has been downward. The Alps have been cooling, and not getting warmer. The situation, Aigner says, is simialr at all the stations he’s looked at in the Alps region.

Aigner notes that for the Säntis station, the 10 year running average is currently only 0.4°C above the long-term mean.

Looking at the last 48 winters (since 1970) for Arlberg, Aigner points out the current level for the 10-year running mean is precisely where it was almost 50 years ago (see 11:55). Aigner summarizes:

At the 13-minute mark, Aigner looks at the past 30 years. Here the result is nothing short of surprising.

The winters have gotten colder not only at Galzig, but also at every mountain station that I have examined in the eastern Alps, western Alps and in the German central mountains.”

At the Galzig station the mean temperature has in fact dropped 1.4° C over the period!

Next Aigner examines maximum snow levels in the Alps (15:06). Here as well maximum snow depth has seen so significant trend. And this year there’s a strong possibility that a new record snow depth will be set, which would break the record set back in 1941. The Austrian researcher summarizes:

At a single glance we can say the annual maximum snow depth over the past 92 years has not changed at all.”

Aigner also examined “fresh snow” amounts, i.e. the new snow one finds each morning at 7 a.m. and whose amounts are tallied up (18:38). Over the past 72 years we see total accumulated snow fall ranged from just over 300 cm to over 1300 cm. The 10-year running average here as well shows no significant trend change.

Winters in the Alps today as long as 75 years ago

Finally Aigner looks at the dataset for days with snow on the ground for Lech am Arlberg (20:34) going back to 1946. The location sees snow on the ground an average of 196 days per year. Once again, Aiger here says: “No change at all.”

Last winter was slightly above normal.

Interestingly days without snow on the ground were more common back in the 1940s and 50s! Overall, Aigner summarizes, winters are just as long today as they were 75 years ago. The length of the ski season has also not changed over the past 72 years.

Aigner then shows the stats for ski resort Zürs, where the trends behave similarly.

What has changed, Aigner shows, are the June-July-August temperatures (29:34). Here we see that they ‘ve increased since 1975. Yet when looking at the chart, most of the increase occurred between 1975 and 1995.

At 31.45 Aigner shows why summers have warmed up in the Alps: the number of hours with sunshine rose a whopping 25%.