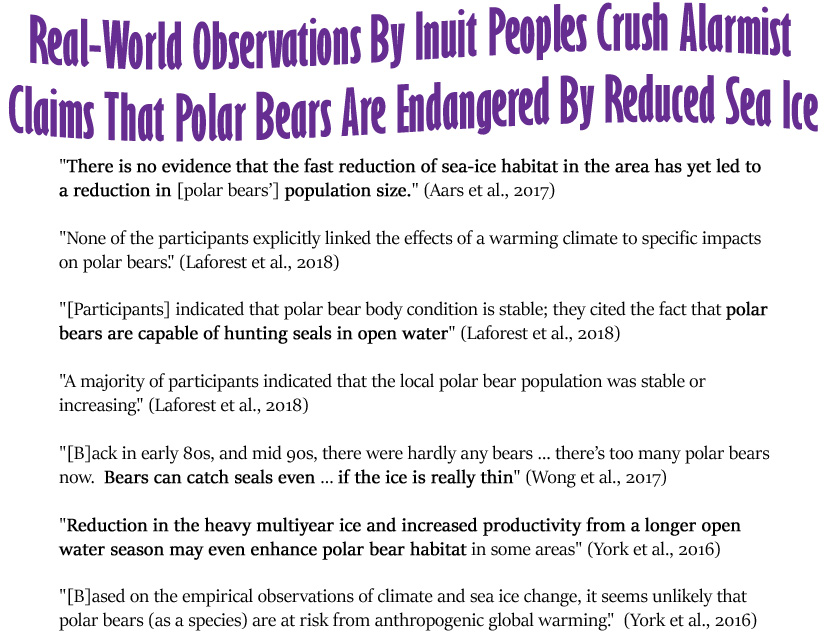 A remarkably unsophisticated paper was published a few months ago curiously entitled Internet Blogs, Polar Bears, and Climate-Change Denial by Proxy.  Among the list of co-authors of Harvey et al. (2017) are two rather familiar names in climate science circles: Michael E. Mann and Stephan Lewandowsky.

The 14 authors liberally utilize name-calling and broad-brushed accusation (i.e., “unsubstantiated opinions of climate-change deniers”) to make the claim that “climate-change deniers” have no scientific backing for their “opinions”, and so they consequently use the same scare-mongering rhetorical devices and tactics as creationism apologists to advance their cause.

“Proponents of creationism and intelligent design use the same strategy [as climate-change deniers]: Instead of providing scientific evidence in favor of their opinions, they instead focus selectively on certain lines of evidence for evolution and attempt to cast doubt on them (Nisbet 2009).”

“Rhetorical devices to evoke fear and other emotions, such as implying that the public is under threat from deceitful scientists, are common tactics employed by science-denier groups (Barry et al. 2008).”

The purpose of their paper is to make the case that widely-read “denier blogs” like Watts Up With That and Climate Depot have cherry-picked an anthropogenic global warming (AGW) icon, the polar bear, and then proceeded to hand-wave by denying the “well established” science that says these bears’ survival and ability to obtain food (i.e., hunt seal) is threatened by reductions in sea ice.   In denying that these animals are endangered by sea ice losses, the polar bear has become a “proxy” or “keystone domino” for denying all the other dire consequences associated with AGW.

“Here, focusing on Arctic sea ice and polar bears, we show that blogs that deny or downplay AGW disregard the overwhelming scientific evidence of Arctic sea-ice loss and polar bear vulnerability. By denying the impacts of AGW on polar bears, bloggers aim to cast doubt on other established ecological consequences of AGW.”

Indeed, Harvey et al. (2017) authors claim that the evidence is both “overwhelming” and “well established” that polar bears can only hunt and catch their main prey, seals, “from the surface of the sea ice”.   They can not catch seals in the open water.  Consequently, as long as there is less sea ice available, “AGW assures that all polar bears ultimately will be negatively affected.”

Inuit Observations, And Scientists Who Record Them, Are Now ‘Climate-Change Denial’

The native Inuit peoples who have lived in the Arctic and observed polar bear hunting practices for generations are apparently deserving of the “climate-change denier” moniker.

For that matter, the audacious scientists who risk the ire of the AGW gatekeepers to interview these community leaders and then publish their results in scientific journals apparently must be classified as “climate-change deniers” too.

Why?  Because there appears to be widespread agreement among Inuit observers that polar bears are skilled swimmers who can catch seals in open water (and not just from sea ice surfaces).   This observation wholly contradicts the “well established” and “overwhelming” scientific evidence identified in Harvey et al. (2017) that says polar bears can only catch seals from a sea ice platform.

“The [native populations’] view of polar bears as effective open-water hunters is not consistent with the Western scientific understanding that bears rely on the sea ice platform for catching prey (Stirling and McEwan, 1975; Smith, 1980). The implications of this disagreement are paramount, given that scientists suggest that the greatest threat to polar bears associated with a decrease in sea ice is a significant decrease in access to marine mammal prey (Stirling and Derocher, 1993; Derocher et al., 2004).” — Laforest et al., 2018

‘There’s Too Many Polar Bears Now’

Not only do the generational observations indicate that polar bears’ hunting practices are not duly harmed by sea ice reduction, but community participants consistently report thriving and growing polar bear populations — especially in recent years.

Even aerial analysis has revealed stable to growing polar bear populations across wide swaths of the Arctic.  Aars et al. (2017), for example, report that there is “no evidence” that reduced sea ice has led to a reduction in polar bear population size.  To the contrary, these scientists found that polar bears living near the Barents Sea increased in number by 42% — from 685 to 973 — between 2004 and 2015.

If Michael E. Mann, Stephan Lewandowsky, and the other authors of the Harvey et al. (2017) polemic wish to characterize those who reject observational evidence (i.e., science) as “deniers”, perhaps they should first get their own “facts” straight.

After this insidious “denialism” permeating Inuit communities has been eradicated, the 14 authors of Harvey et al. (2017) might then have a leg to stand on in going after the “denier blogs” and their creationist-style tactics and scare-mongering rhetorical devices.

The number and distribution of polar

bears in the western Barents Sea

“There is no evidence that the fast reduction of sea-ice habitat in the area has yet led to a reduction in population size.”

“Communities also differed in their perception of the prevalence of problem polar bears and the conservation status of the species, with one-third of participants reporting that polar bears will be unaffected by, or even benefit from, longer ice-free periods. A majority of participants indicated that the local polar bear population was stable or increasing.”

“Five participants indicated that polar bears are adept swimmers capable of hunting seals in open water. Residents of communities along Baffin Bay have also expressed this viewpoint (Dowsley and Wenzel, 2008), whereas Inuvialuit of the Western Arctic had variable perceptions of the ability of bears to catch seals in open water (Joint Secretariat, 2015). The [native populations’] view of polar bears as effective open-water hunters is not consistent with the Western scientific understanding that bears rely on the sea ice platform for catching prey (Stirling and McEwan, 1975; Smith, 1980). The implications of this disagreement are paramount, given that scientists suggest that the greatest threat to polar bears associated with a decrease in sea ice is a significant decrease in access to marine mammal prey (Stirling and Derocher, 1993; Derocher et al., 2004).”

“A recent aerial survey of the Southern Hudson Bay subpopulation concluded that the abundance of polar bears has remained steady since 1986 (943 bears; SE: 174) (Obbard et al., 2015). The survey included the entire coastal range and offshore island habitat of the Southern Hudson Bay subpopulation, except for the eastern James Bay coast. Taken together, the results of the aerial survey and the participant responses from Wemindji and Chisasibi indicate that the local population has remained stable. However, the unanimous responses from participants in Whapmagoostui/Kuujjuarapik suggest that there has been a localized increase in the number of bears near Whapmagoostui/Kuujjuarapik.”

“All [Inuit] participants reported having more bear encounters in recent years than in the past. Some participants indicated that the bears they have encountered are healthy.”

Inuit observations: “Last year he said that there’s more bears that are more fat … they rarely see unhealthy bears … the only time they would see one is when it’s pretty old … it won’t hunt—hunt as much … and it’s skinny. (AB9)  … Our elders, they say, they migrate, into other area… for years, and then they come back … that’s what we’re experiencing now … back in early 80s, and mid 90s, there were hardly any bears … there’s too many polar bears now.  Bears can catch seals even—even if the—if the ice is really thin … they’re great hunters those bears … they’re really smart … they know how to survive”

Demographic and traditional knowledge perspectives on

“Reduction in the heavy multiyear ice and increased productivity from a longer open water season may even enhance polar bear habitat in some areas.”

“It seems unlikely that polar bears (as a species) are at risk from anthropogenic global warming.”

“The Time of the Most Polar Bears”

“No, because polar bears can go and follow the seals further [if sea ice retreats], so they won’t have trouble hunting. Also the snow covers the [seals’] breathing holes but polar bears can still hunt, it’s just for people.”