Scientists (Krekel and Zerrahn, 2017 ) report that the installation of wind turbines near human populations “exerts significant negative external effects on residential well-being” and a “significant negative and sizable effect on life satisfaction” due to “unpleasant noise emissions” and “negative impacts on landscape aesthetics”.

“We show that the construction of wind turbines close to households exerts significant negative external effects on residential well-being … In fact, beyond unpleasant noise emissions (Bakker et al., 2012; McCunney et al., 2014) and impacts on wildlife (Pearce-Higgins et al., 2012; Schuster et al., 2015), most importantly, wind turbines have been found to have negative impacts on landscape aesthetics (Devine-Wright, 2005; Jobert et al., 2007; Wolsink, 2007). … We show that the construction of a wind turbine within a radius of 4,000 metres has a significant negative and sizeable effect on life satisfaction. For larger radii, no negative externalities can be detected.”

If human well-being and life satisfaction is seriously compromised by the nearby presence of a wind turbine, imagine the physiological effects on birds, bats, and land-dwelling mammals in general.

1. A 20-Fold Loss Of Bat Habitat At Wind Turbine Sites … A ‘Worldwide Phenomenon’ 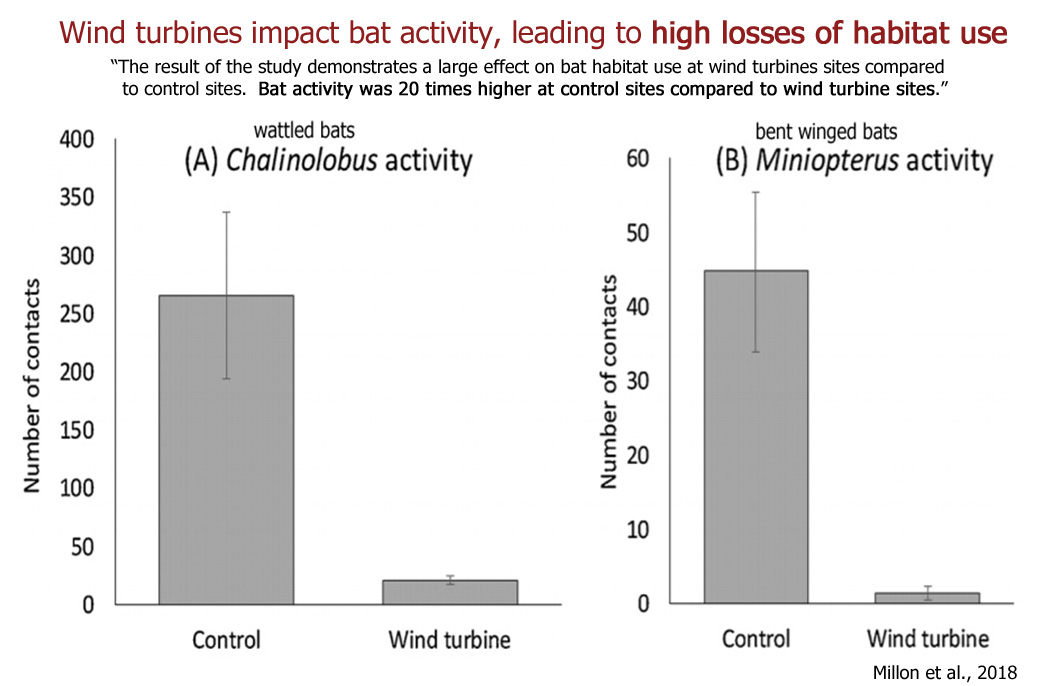 “Wind turbines impact bat activity, leading to high losses of habitat use … Island bats represent 60% of bat species worldwide and the highest proportion of terrestrial mammals on isolated islands, including numerous endemic and threatened species (Fleming and Racey, 2009). … We present one of the first studies to quantify the indirect impact of wind farms on insectivorous bats in tropical hotspots of biodiversity. Bat activity [New Caledonia, Pacific Islands, which hosts nine species of bat] was compared between wind farm sites and control sites, via ultrasound recordings at stationary points [A bat pass is defined as a single or several echolocation calls during a five second interval.] The activity of bent winged bats (Miniopterus sp.) and wattled bats (Chalinolobus sp.) were both significantly lower at wind turbine sites. The result of the study demonstrates a large effect on bat habitat use at wind turbines sites compared to control sites. Bat activity was 20 times higher at control sites compared to wind turbine sites, which suggests that habitat loss is an important impact to consider in wind farm planning. …  Here, we provide evidence showing that two genera of insectivorous bat species are also threatened by wind farms.  … To our knowledge, this is one of the first studies quantifying the indirect negative impact of wind turbines on bat activity in the tropics. … The lower attractiveness of the foraging habitat under wind turbines, both in a tropical and in a temperate climate, indicates that the indirect impact of wind turbine is a worldwide phenomenon.”

“Living in habitats affected by wind turbines may result in an increase in corticosterone levels in ground dwelling animals … Environmental changes and disturbance factors caused by wind turbines may act as potential stressors for natural populations of both flying and ground dwelling animal species. The physiological stress response results in release of glucocorticoid hormones. … The common vole showed a distinct physiological response − the individuals living near the wind turbines had a higher level of corticosterone [physiological stress affecting regulation of energy, immune reactions]. … This is the first study suggesting impact of wind farms on physiological stress reactions in wild rodent populations. Such knowledge may be helpful in making environmental decisions when planning the development of wind energy and may contribute to optimization of conservation actions for wildlife.”

“According to a review by Lovich and Ennen (2013), the construction and operation of wind farms have both potential and known impacts on terrestrial vertebrates, such as: (i) increase in direct mortality due to traffic collisions; (ii) destruction and modification of the habitat, including road development, habitat fragmentation and barriers to gene flow; (iii) noise effects, visual impacts, vibration and shadow flicker effects from turbines; (iv) electromagnetic field generation; (v) macro and microclimate change; (vi) predator attraction; and (vii) increase in fire risks. … Helldin et al. (2012) also highlighted that the development of road networks associated with wind farms could promote increased access for traffic related to recreation, forestry, agriculture and hunting. The consequence, particularly on remote places, is the increase in human presence, affecting large mammals via significant disturbance, habitat loss and habitat fragmentation. These negative effects are expected to be particularly relevant for species that are more sensitive to human presence and activities, such as large carnivores. Large carnivores, such as the wolf, bear, lynx or wolverine, tend to avoid areas that are regularly used by humans and—especially for breeding—show a preference for rugged and undisturbed areas (Theuerkauf et al. 2003; George and Crooks 2006; May et al. 2006; Elfstrom et al. 2008; Sazatornil et al. 2016), which are often chosen for wind power development (Passoni et al. 2017). … Results have shown that the main impact of wind farms on wolves is the induced reduction on breeding site fidelity and reproductive rates. These effects, particularly when breeding sites shift to more unsuitable areas, may imply decreasing survival and pack viability in the short term.”

“The global potential for wind power generation is vast, and the number of installations is increasing rapidly. We review case studies from around the world of the effects on raptors of wind-energy development. Collision mortality, displacement, and habitat loss have the potential to cause population-level effects, especially for species that are rare or endangered.”

“While wind energy provides a viable solution for emission reductions, it comes at an environmental cost, particularly for birds. As wind energy grows in popularity, its environmental impacts are becoming more apparent. Recent studies indicate that wind power has negative effects on proximate wildlife. These impacts can be direct—collision fatalities—and indirect—habitat loss (Fargione et al. 2012; Glen et al. 2013). Negative impacts associated with operational wind farms include collision mortalities from towers or transmission lines and barotrauma for bats. Habitat loss and fragmentation, as well as avoidance behavior, are also consequences resulting from wind farm construction and related infrastructure. The potential harm towards protected and migratory bird species are an urgent concern, especially for wind farms located along migratory flyways. In terms of mortality, wind turbines kill an estimated 300,000 to 500,000 birds, annually (Smallwood 2013). The high speed at which the fan wings move and the concentration of turbines create a gauntlet of hazards for birds to fly through. … [T]he height of most wind turbines aligns with the altitude many bird species fly at (Bowden 2015). Birds of prey— raptors—are of particular concern because of their slow reproductive cycles and long lifespans relative to other bird species (Kuvlesky 2007).”

“Results from our surface water extractions and aerial surveys suggest that the wind farm has negatively affected redheads through altered hydrology and disturbance displacement. Our surface water extraction analysis provides compelling evidence that the local hydrology has been greatly affected by the construction of the wind farm. … Our results suggest the occurrence of direct habitat loss and disturbance displacement of redheads from the wind farm along the lower Texas coast. Although our study was directed solely toward redheads, it is likely that this wind farm has affected other species that use these wetlands or migrate along the lower Texas coast (Contreras et al. 2017). Studies in Europe investigating the effects on waterfowl by wind turbines have reported similar results, showing that turbines have likely compromised foraging opportunities for waterfowl through disturbance displacement (Larsen and Madsen 2000).”

44 responses to “6 New Papers Unsheathe A Hushed-Up ‘Green’ Reality: Habitats Are Being Destroyed By Wind Turbines”