Game over for green energies and CO2 reductions?

Journalist Daniel Wetzel of German national daily Die Welt here presents a devastating commentary on Paris Accord and Germany’s so far “illusionary” CO2 reductions targets. The German failure is a signal that could have significant global consequences.

Wetzel not only calls the targets illusionary, he also believes the existing Energiewende (transition to green energies) is “at an end”.

According to Wetzel, “The Energiewende and climate change are not among the priorities of the government” and that Germany reaching its self-imposed targets is achievable only if “everyone were forced to switch off every boiler, oven, motor. Completely illusionary.”

Lots of talk, no action

While German political leaders like to continue pretending they are taking real action to combat climate change, the reality is that the German government has been rolling back subsidies for green energies such as wind and sun over the past years. And many localities have made the permitting of wind parks far more stringent.

The days of unfettered support for green energies are over. 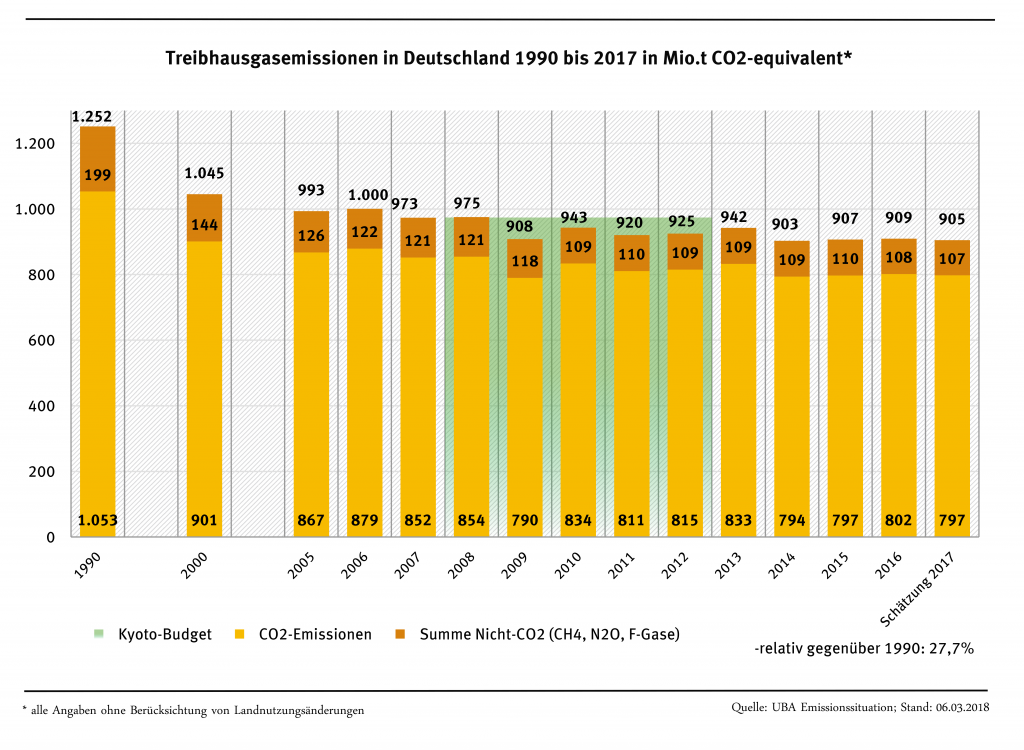 The result: Germany has not reduced its CO2 equivalent emissions for close to a decade (see chart above). Wetzel writes that everyone agrees that it is unrealistic to think that Germany will somehow make the sudden downward trend turn.

German Energiewende “at the end”

The Die Welt journalist adds: “Practically all renowned environmental analysts and government experts have already determined that the German Energiewende structurally has reached the end and that a system change is needed.”

In his commentary Wetzel also reminds that humans have been using fire for some one million years, and that it cannot be expected that they will just stop doing so during the course of one single generation.

Wetzel compares the Energiewende to the Apollo space program, which put man on the moon after 12 years and 120 billion dollars of investment. He notes that compared to the great transformation which Energiewende would entail, this was peanuts.

He warns that implementing the Energiewende could cost the country a back-breaking three trillion euros (without mentioning the impact on climate would be negligible) and doubts the public would ever accept such a large-scale, draconian transformation of society.

Wetzel also comments the Germany’s failure to make the 2020 targets has tarnished the country’s image as a leader in climate protection, and adds: “The coalition agreement and the German Federal Budget for 2018 robbed all remaining credibility.”

In short Germany’s is not serious about reducing CO2.

Environmental groups and the Potsdam Institute, for example, are fuming, yet keep insisting it’s still not too late and achieving the target is still possible. But Wetzel injects sobriety and realism: “In the meantime we know that Germany will not only fail resoundingly to meet its self-imposed 2020 targets, but also those of the EU itself.”

With Germany as Europe’s largest economy, and regarded as a role model for all things green, the country’s failure would send a devastating message to the rest of the continent and the world: The Green Revolution was mostly a dream and was in fact never attainable. If tech-savvy Germany can’t do it, who can?

Yet, German officials continue to insist they can meet the 2030 target! But Die Welt’s Wetzel notes that doing so would mean Germany cutting it’s CO2 equivalent emissions by some 40%, or 350 million tonnes, within the next 12 years. That would mean radical and painful transformations. Recall that Germany has not managed to emissions at over the past decade (see chart above). Wetzel asks: “How credible is this target?”

The feasibility rhetoric of policymakers as a rule has no reality basis.”

Finally, he reminds that Germany going it alone will never work, and that climate protection has to be “organized internationally – or not at all”.