What follows is the latest chart from the Danish Meteorological Institute (DMI): 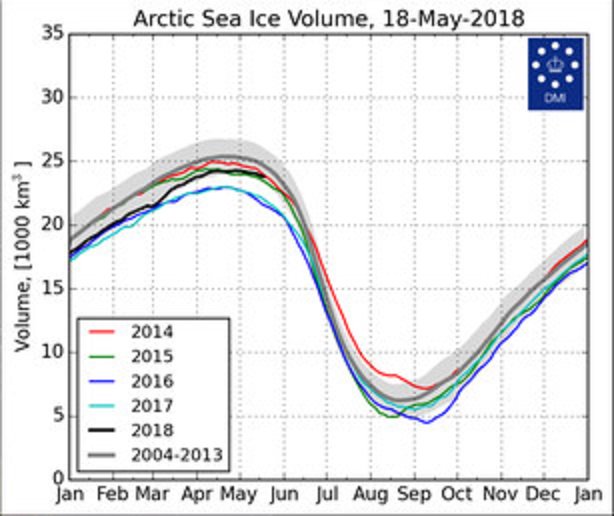 As the chart shows, Arctic sea ice volume hasn’t really budged that much since it peaked back inApril.

Less than 4% below the mean

The deviation from the mean is less than 1000 cubic kilometers, i.e. less than 4%. That means sea ice volume is well within the range of natural variability.

Predictions of an ice-free Arctic go back decades

Two days ago the Deplorable Science Blog here reminded us: “Sixty years ago, the New York Times predicted ships would be sailing over the North Pole ‘within the lifetime of our children.’”

In the same article Steve Goddard brings up a 2008 article by the AP’s Seth Borenstein, who quoted climate alarmist, Massachusetts Senator Ed Markey, who then called James Hansen a “climate prophet”.

Both Al Gore and former NASA GISS director James Hansen warned –“echoing work by other scientists” — that the Arctic would be ice-free in the summer by now!

Ironically the real “prophet” turns out to be Oklahoma Senator, global warming skeptic Sen. James Inhofe, who in 2008 dismissed all the predictions as media doom, and said that Americans weren’t buying it.

Ten years later Senator Inhofe turns out to be right.

30 responses to “Gore And Hansen Join “False Prophets Hall of Fame” As Arctic Ice Volume Now Only 430 Below Mean!”