In contrast, two new papers cite evidence that the timing of the lagged CO2 response to temperature changes may have ranged between 1300 and 6500 years in some cases.  It would appear that a millennial-scale lagged response to temperature undermines the claim that CO2 concentration changes were a driver of climate in the ancient past.

Temperature correlations between the eastern equatorial

Pacific and Antarctica over the past 230,000 years

“The EEP [eastern equatorial Pacific] stack shows persistent covariation with Antarctic temperature on orbital and millennial timescales indicating tight coupling between the two regions. This coupling however cannot be explained solely by CO2 forcing because in at least one important case, the Marine Isotope Stage (MIS) 5e–5d glacial inception, both regions cooled ∼5–6.5 thousand years before CO2 decreased. More likely, their covariation was due to advection of Antarctic climate signals to the EEP by the ocean.”

“Antarctic ice core records are furthermore ambiguous with regard to the causal relationship between CO2 and temperature. Phase relationships show CO2 lagging behind temperature in the obliquity band (Jouzel et al., 2007) and across some major transitions (Caillon et al., 2003; Fischer et al., 1999; Kawamura et al., 2007; WAIS Divide Project Members, 2013), most prominently during the Marine Isotope Stage (MIS) 5e–5d boundary, i.e. the last glacial inception. Antarctic cooling at this time was associated with a major Milankovitch signal, and appears to have transpired almost entirely before the change in CO2 concentration. It remains unclear whether the temperature lead was restricted to Antarctica or was broader.”

Asynchrony between Antarctic temperature and CO2

associated with obliquity over the past 720,000 years 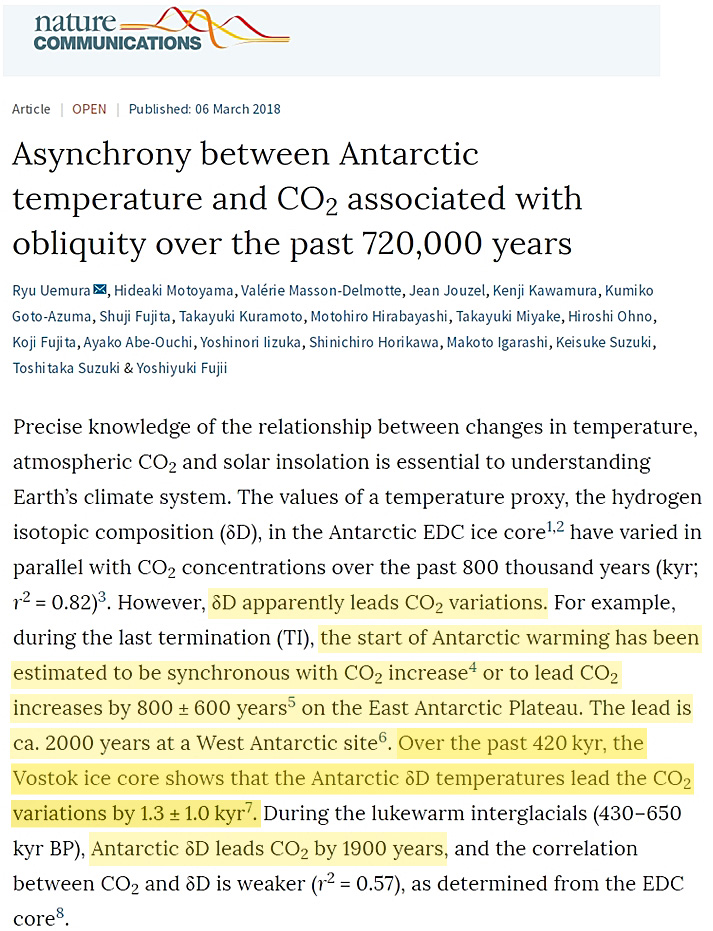 “Precise knowledge of the relationship between changes in temperature, atmospheric CO2 and solar insolation is essential to understanding Earth’s climate system. The values of a temperature proxy, the hydrogen isotopic composition (δD), in the Antarctic EDC ice core have varied in parallel with CO2 concentrations over the past 800 thousand years (kyr; r2 = 0.82). However, δD [temperature] apparently leads CO2 variations.”

“Over the past 420 kyr, the Vostok ice core shows that the Antarctic δD temperatures lead the CO2 variations by 1.3 ± 1.0 kyr.”

“Although the mechanisms underlying the coupling and the phase lags remain unclear, the Southern Ocean region, rather than Antarctica, is thought to play the central role in regulating CO2 variations. A box model, for example, estimated a ca. 60% increase in CO2 during TI that is attributable to direct and indirect temperature effects, such as changes in sea ice cover and vertical mixing in the Southern Ocean. On millennial time scales, a multi-proxy study suggests that an antiphased hemispheric temperature response to ocean circulation changes resulted in Antarctic temperatures leading global temperatures and CO2 during TI [the last glacial termination].  … [O]ur data suggest that the lead in Antarctic δD temperatures (i.e. temperature without correcting for source effects) over CO2 is partly attributable to the effects of the moisture source on δD temperatures over the past 720 kyr in the obliquity band. These results suggest that the importance of moisture source effects for the obliquity signal in δD. Thus, the source effect must be considered in future research about the relationship between Antarctic temperatures and CO2.”

“Within the obliquity frequency band, our analyses suggest that temperature variations in Antarctica have led ocean temperatures throughout the past 720 kyr. This phenomenon is most likely explained by the strong influence of local AMI on ΔT. … During TI [the last glacial termination], CO2 rose at ~18 kyr BP, which is related to the melting of the Northern Hemisphere ice sheet and the subsequent weakening of the Atlantic meridional overturning circulation (AMOC). Thus, the timing at which CO2 begins to rise during a termination would be determined by when the Northern Hemisphere ice sheet begins to melt. When eccentricity is small, the summer insolation maxima are small. Thus, if obliquity rises beyond the threshold of melting, a moderate climate forcing could cause warming enough that the southern margin of the North American ice sheet begin to retreat.”

“Atmospheric CO2 follows temperature changes in Antarctica with a lag of some hundreds of years.”

“The sequence of events during Termination III suggests that the CO2 increase lagged Antarctic deglacial warming by 800 ± 200 years and preceded the Northern Hemisphere deglaciation.”

“High-resolution records from Antarctic ice cores show that carbon dioxide concentrations increased by 80 to 100 parts per million by volume 600 ± 400 years after the warming of the last three deglaciations.”

“The lag was calculated for which the correlation coefficient of the CO2 record and the corresponding temperatures values reached a maximum. The simulation yields a [CO2] lag of (1200 ± 700) yr.”

“Our chronology also indirectly gives the timing of the CO2 rise at [glacial] terminations, which occurs within 1 kyr of the increase in Antarctic temperature.”