However history shows that it is purely speculative that cold tropical Atlantic sea surface temperatures will act to suppress hurricanes hitting the US.

Klotzback notes that the coldest tropical sea surface temperatures seen in June were recorded in 1985, and looking at the 1985 US hurricane season Wikipedia tells us that season was in fact a rather nasty one for the entire east coast of the USA:

The 1985 Atlantic hurricane season featured eight landfalling tropical cyclones in the United States, including a record-tying six hurricanes, the most in a single year since 1916.“ 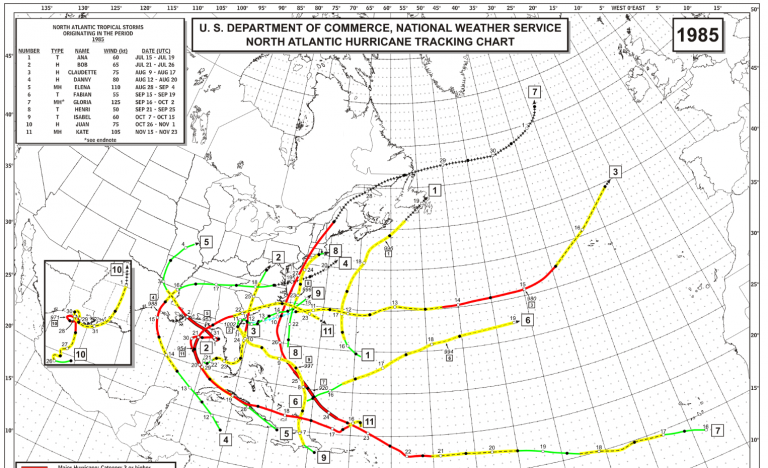 Wikipedia writes that “the year featured average activity overall” but was “particularly destructive and disruptive for the United States, with damage amounting to a then-record US$4 billion.”

Further, Wikipedia adds: “The entire coastline from Brownsville, Texas, to Eastport, Maine, was under a gale warning at some point during the year and a portion of every state was under a hurricane warning.”

Bastardi warns of the “in-close” threat

Observing the 1985 hurricane chart, we see that the vast majority of the 11 named storms formed “in-close”, relatively near the US mainland.

Meteorologist Joe Bastardi warned in his May 26th WeatherBell Saturday Summary that warm waters near the coast needed real attention and harbored plenty of threat. In no way should people let themselves get casual about it.

So, don’t let all the cold tropical Atlantic surface water fool you into  thinking that the upcoming hurricane season is going to be on the light side for the US coast.

1985 shows us things can get pretty nasty even when the surface of the tropical Atlantic basin is cold.