A new analysis of top-to-bottom (0-5000 m) ocean heat content changes since the mid-1990s reveals that (a) large regions of the global ocean have undergone cooling, and (b) the overall net temperature change for 1994-2013 was a modest 0.02°C.  In contrast, during the Holocene the oceans naturally warmed at a rate and magnitude several times greater than the last few decades, undermining claims that the modern era change is unusual or unprecedented. 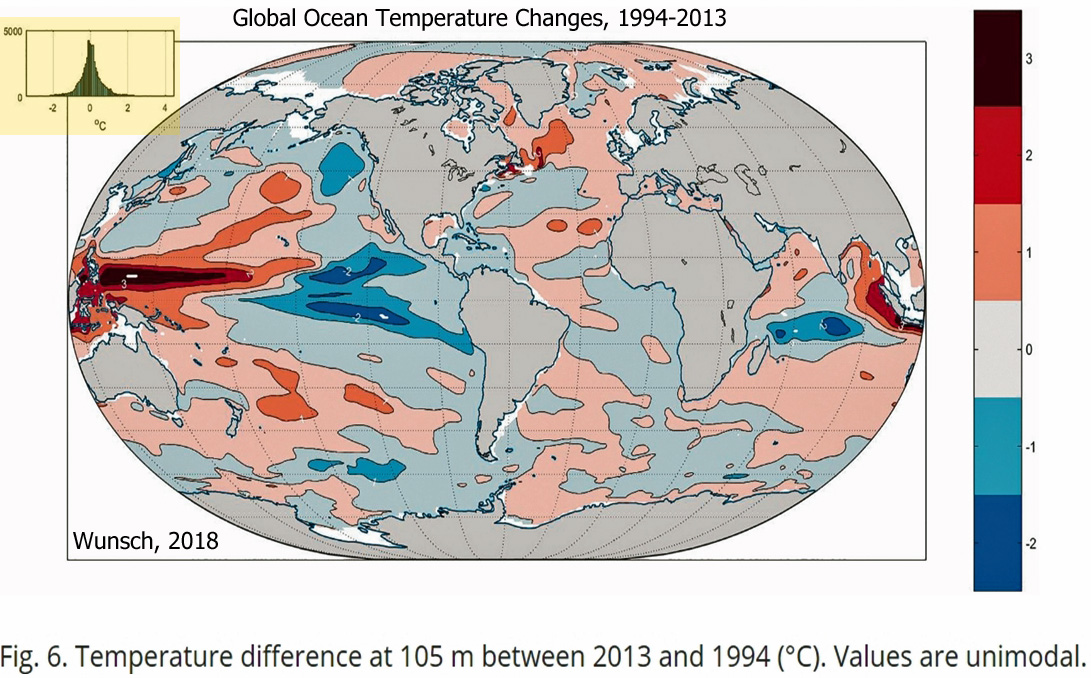 According to the United Nation’s Intergovernmental Panel on Climate Change (IPCC), the atmosphere accounts for only 1% of the heat energy change in the Earth system, whereas the 0-2000 meter layer of the ocean is where 93% of the globe’s overall heat/temperature change has occurred in recent decades.

“Ocean warming dominates the total energy change inventory, accounting for roughly 93% on average from 1971 to 2010 (high confidence). The upper ocean (0-700 m) accounts for about 64% of the total energy change inventory. Melting ice (including Arctic sea ice, ice sheets and glaciers) accounts for 3% of the total, and warming of the continents 3%. Warming of the atmosphere makes up the remaining 1%.” (IPCC, 2013)

“A very weak long-term [1993-2011] cooling is seen over the bulk of the rest of the ocean below that depth [2000 m], including the entirety of the Pacific and Indian Oceans, along with the eastern Atlantic basin.”  (Wunsch and Heimbach, 2014) 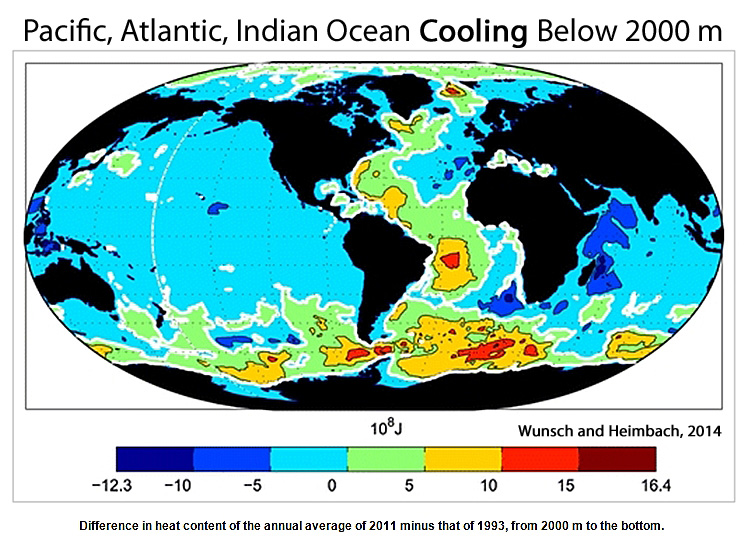 In a new paper, Harvard oceanographer Carl Wunsch provides an analysis of the overall temperature, salinity, and surface elevation changes in the global ocean for the 20 years between 1994-2013.  He focuses on the profound uncertainties in the data analysis, and cautions that we still have much to learn about the ocean system.

Wunsch provides a novel assessment of the temperature data for the whole ocean (0-5000 m), as the record doesn’t end at the 2000 meter depth.

The results reveals that the global ocean has been cooling in some regions and warming in others for the last few decades, with an overall net change of 0.02°C (~0.001° per year) during 1994-2013.

Towards determining uncertainties in global oceanic 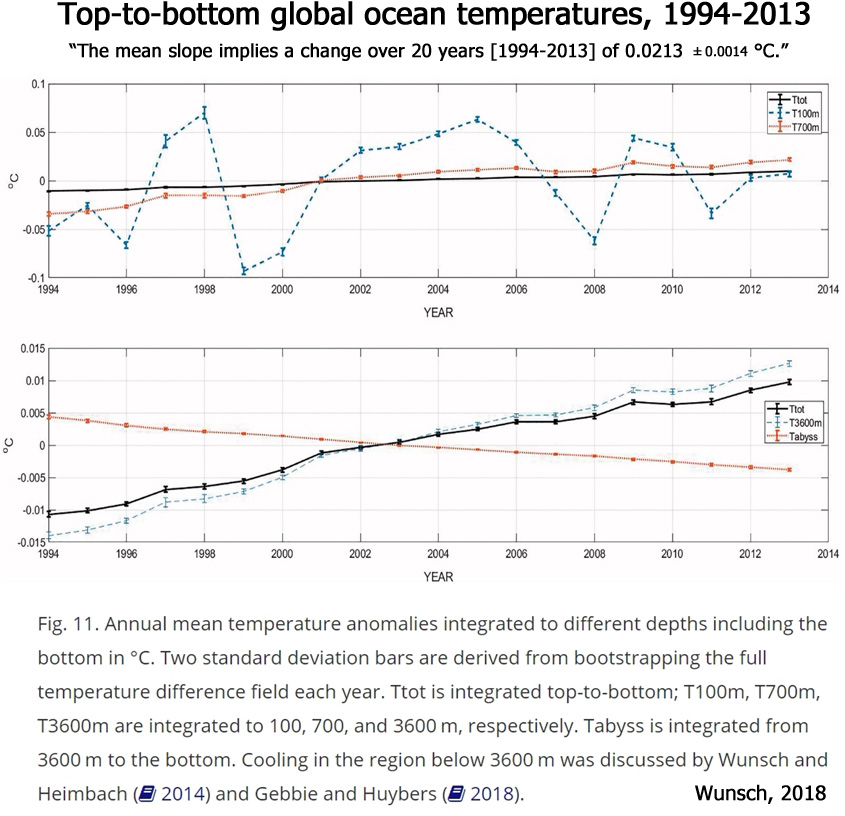 In contrast to these modern ocean temperature changes, a Geophysical Research Letters paper from 2016 revealed  that during the Holocene the oceans naturally warmed by more than 2°C in a span of just 200 years — 0.1°C per decade — at the deeper 0-1000 m layer (Bova et al., 2016). This is several times the rate and magnitude the ocean is reported to have warmed during 1971-2010 (0.015°C per decade) at the shallower depth of 700 m.

In fact, (Bova et al., 2016) concluded that deep ocean temperature changes for the last 200 years are apparently so insignificant they are “below the detection limit”.

“The observational record of deep-ocean variability is short, which makes it difficult to attribute the recent rise in deep ocean temperatures to anthropogenic forcing. Here, we test a new proxy – the oxygen isotopic signature of individual benthic foraminifera – to detect rapid (i.e. monthly to decadal) variations in deep ocean temperature and salinity in the sedimentary record. We apply this technique at 1000 m water depth in the Eastern Equatorial Pacific during seven 200-year Holocene intervals. Variability in foraminifer δ18O [temperature proxy] over the past 200 years is below the detection limit, but δ18O signatures from two mid-Holocene intervals indicate temperature swings >2 °C within 200 years.” (Bova et al., 2016)

Comparing past “natural” changes to the recent changes in ocean temperature therefore would undermine claims that the modern version of “global warming” is unusual, unprecedented, or even remarkable.

Instead, perhaps we are merely witnessing “natural variability”.