Nowadays the usual suspects are busily peddling the idea that Hurricane Florence’s intensity is due to climate change.

For example climate activist Stefan Rahmstorf of the alarmist Potsdam Institute blames Florence on global warming, telling the online Potsdamer Nachrichten (PNN) here: “In fact many of the strongest storms we have ever seen have occurred in the past years.”

Alarmist claims go down in flames

The German media and climate science establishment are out in full force implying recent hurricanes are mostly manmade and getting stronger and more frequent.

However, just as Kenneth Richard showed yesterday by presenting more than a dozen recent papers, when we look at the observed data, all these alarmist claims go down in flames.

Firstly, climate ambulance chasing scientists, such as Messieurs Stefan Rahmstorf and Dim Coucou, like pretending storms are intensifying due to manmade global warming. Yet two days ago I tweeted a table showing that 75% of the most powerful hurricanes impacting the US actually happened before 1970, a time when CO2 was at supposedly safe levels:

9 of top 12 most powerful hurricanes making landfall in USA HAPPENED BEFORE 1970!! pic.twitter.com/GLR5Ksd8yE

Although some people may think Florence is a major hurricane, it in fact made landfall as a Category 1 storm only – a far cry from the Category 4 many were warning us about just days ago — e.g. Erik Holthaus.

Hurricane number and strength not up 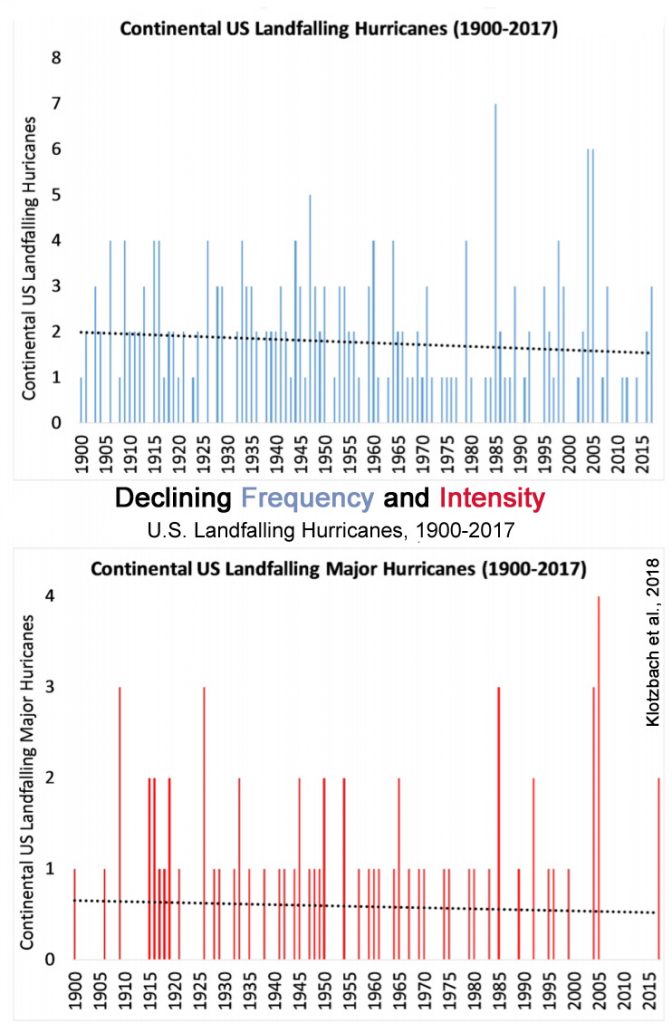 According to Klotzbach, “Since 1900 neither observed CONUS [Continental United States] landfalling hurricane frequency nor intensity show significant trends, including the devastating 2017 season.”

What is unprecedented is the long 12-year period from 2005 to 2017 which saw not a single major hurricane hitting the US. This is probably the most devastating and frustrating fact for the global warming ambulance chasers. That’s a glaring statistic that’s impossible to alter.

The story is much the same in the North Western Pacific, where the following chart shows us cyclone frequency has been much lower over the past two decades compared to the two decades prior. 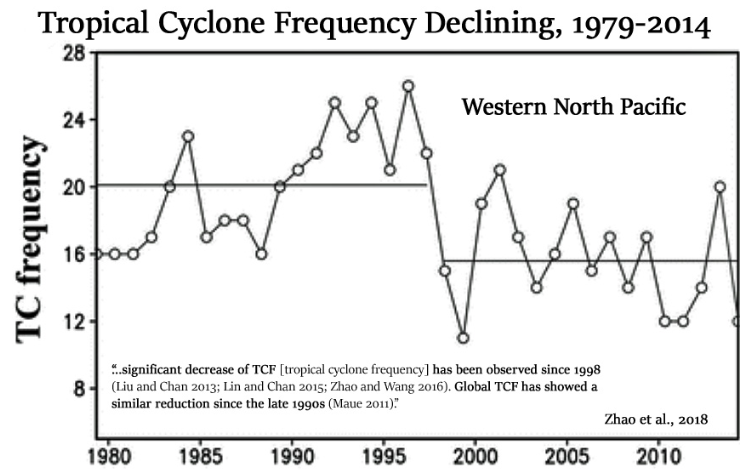 And using the data from the Japanese Meteorological Agency (JMA), skeptic blogger Kirye also tweeted that the number of typhoons being formed has declined modestly over the years: 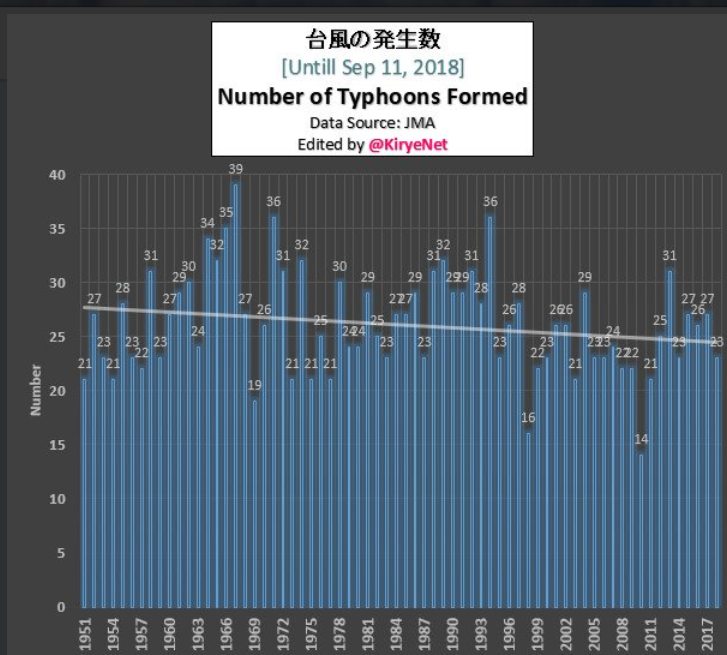 Number of typhoons on the decline. Source: Kirye.

Cyclone bedwetters have even suggested that Florence’s odd track and stall at the Carolina coast is also a sign of climatatic weirding. Yet, weird storm tracks have always occurred and Florence is just run of the mill. For example, check out Typhoon Wayne back in 1986, which ran amok across the Western Pacific like a drunken hooligan: