NOAA: “No Compelling Evidence” Behind Claims Of More Hurricane Landfalls!

Despite all the signals being sent from every direction suggesting global warming is leading to more frequent and intense hurricanes, even the warmist NOAA is forced to confess that this has not been the long-term case.

About the claims of more hurricanes? Well, the NOAA says: wait another 30 to 50 years!

Sorry alarmists, but the data simply just don’t show it. That#s what the NOAA concludes.

We climate realists/non-alarmists suggest you come to terms with that inconvenient fact and learn to live with this good news.

But don’t despair too much. The NOAA insists that an increase “should” happen – later in the second half of the century.

What follows is the NOAA Part E Summary for Atlantic Hurricanes and Global Warming from Section 2, which is on long-term trends in number of storms (emphasis added).

In summary, neither our model projections for the 21st century nor our analyses of trends in Atlantic hurricane and tropical storm counts over the past 120+ yr support the notion that greenhouse gas-induced warming leads to large increases in either tropical storm or overall hurricane numbers in the Atlantic.

While one of our modeling studies projects a large (~100%) increase in Atlantic category 4-5 hurricanes over the 21st century, we estimate that such an increase would not be detectable until the latter half of the century, and we still have only low confidence that such an increase will occur in the Atlantic basin, based on an updated survey of subsequent modeling studies by our and other groups.

Therefore, we conclude that despite statistical correlations between SST and Atlantic hurricane activity in recent decades, it is premature to conclude that human activity–and particularly greenhouse warming–has already caused a detectable change in Atlantic hurricane activity. (“Detectable” here means the change is large enough to be distinguishable from the variability due to natural causes.)

However, human activity may have already caused some some changes that are not yet detectable due to the small magnitude of the changes or observation limitations, or are not yet confidently modeled (e.g., aerosol effects on regional climate).

We also conclude that it is likely that climate warming will cause Atlantic hurricanes in the coming century have higher rainfall rates than present-day hurricanes, and medium confidence that they will be more intense (higher peak winds and lower central pressures) on average.

In our view, it is uncertain how the annual number of Atlantic tropical storms will change over the 21st century. All else equal, tropical cyclone surge levels should increase with sea level rise as projected for example by IPCC AR5. These assessment statements are intended to apply to climate warming of the type projected for the 21st century by prototype IPCC mid-range warming scenarios, such as A1B or RCP4.5.

The relatively conservative confidence levels attached to our tropical cyclone projections, and the lack of a claim of detectable anthropogenic influence on tropical cyclones at this time contrasts with the situation for other climate metrics, such as global mean temperature.”

The NOAA also provides a chart of hurricane activity that goes back to 1850 (but ends at 2006): 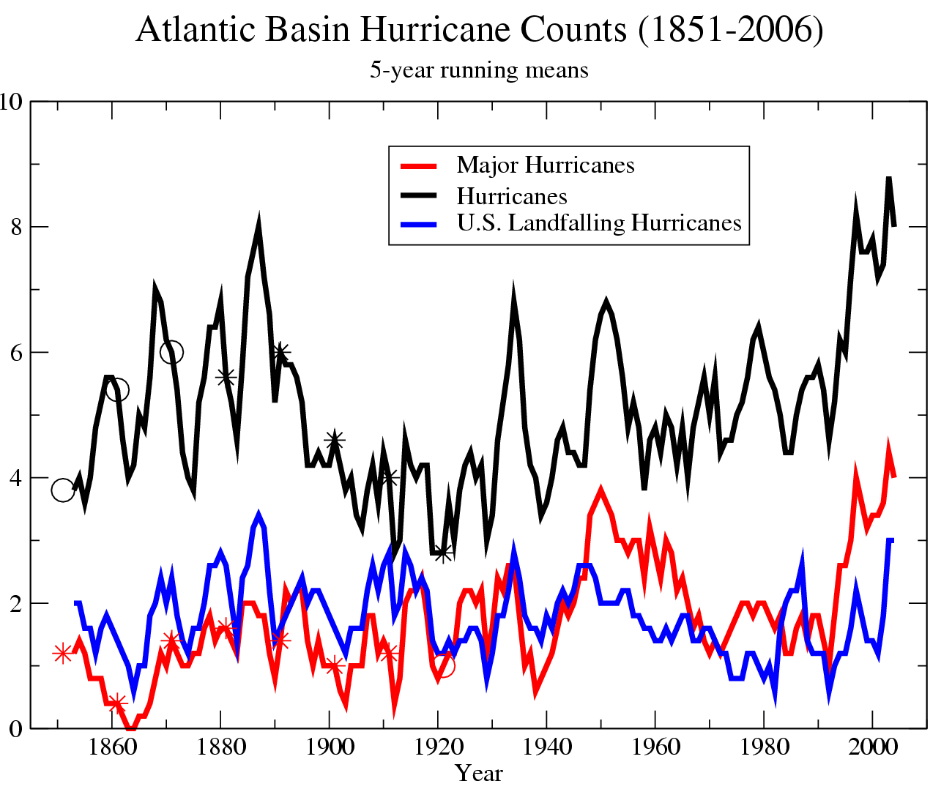 Nothing beyond natural variability and climate cycles is detectable, the NOAA concludes. Readers should note that there was not one single major hurricane land fall in the US from 2006 – 2016. Chart NOAA.

Part B of Section 2 of the NOAA’s Global Warming and Hurricanes – An Overview of Current Research Results comes to the conclusion:

While there have been increases in U.S. landfalling hurricanes and basin-wide hurricane counts since the since the early 1970s, Figure 4 shows that these recent increases are not representative of the behavior seen in the century long records. In short, the historical Atlantic hurricane record does not provide compelling evidence for a substantial greenhouse warming-induced long-term increase.”

14 responses to “NOAA: “No Compelling Evidence” Behind Claims Of More Hurricane Landfalls!”