By Kirye
Edited by P. Gosselin

A climate skeptic book by Japanese physicist and Professor Emeritus Yuh Fukai released in October, 2015, was recently released in Kindle version. The title of the book in Japanese is: 地球はもう温暖化していない, which means: 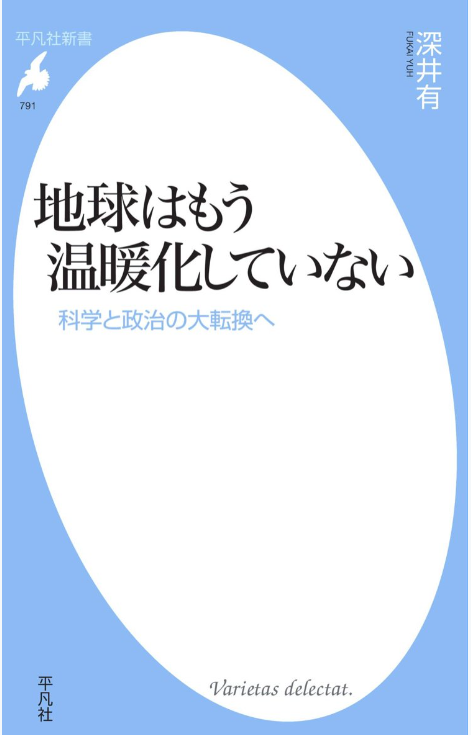 Dr. Fukai also points out that global vegetation coverage increased by 11% in 29 years, from 1982 to 2010, as increasing CO2 has helped the greening of the Sahel and Sahara Desert. He contradicts the often heard media claims that drought is spreading globally, writing: “The media spread the word that desertification is progressing globally, but practically the desert is greening through CO2.” […] “Everyone should be aware that increasing CO2 concentrations in atmosphere is not in itself harmful, but it’s a good thing.”

Dr. Fukai also shows that the earth’s temperature change is not simple and does not correlate at all with CO2. He shows graphs from D. M. Etheridge et al., Mauna Loa Observatory and the temperature data from Moberg et al. (2005). 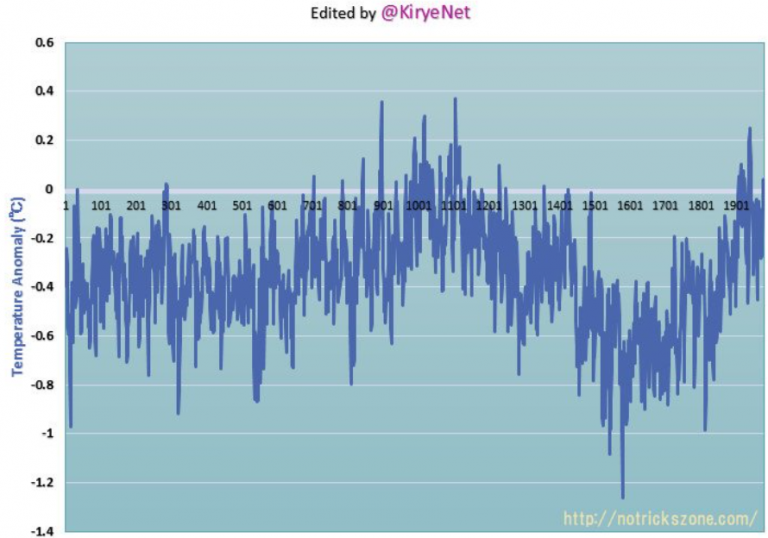 In addition he writes that from a historical perspective, “warming brought about no trouble to human life.”

Fukai notes that in Japan the great famine of Kanei (1640 to 1643) and the great famine of Genroku (1695 to 1696) happened during the Little Ice Age, a dark and gloomy period of crop failures and paranoid witch hunts. He writes: “We have never heard of a famine resulting in a warming period”, and that “global cooling was terror for humans.”

He notes that public opinion in Japan has been almost universally behind the claim that humans are the main cause of warming. Some 91% of Japanese citizens believe it. A shocking number compared to other countries. It is certain the media were in part hugely responsible, he writes.

Dissent is rare in Japan

“Articles by outspoken journalists overseas, however, have put the brakes on the CO2-made global warming hypothesis. There is no chance of that here in Japan. Japanese journalists have suppressed views that challenge the hypothesis,” Fukai writes.

According to Fukai: “Among Japanese earth scientists, only Dr. Shigenori Maruyama has sharply criticized the theory that global warming is caused by CO2 from a paleoclimatology point of view.”

But he adds: “Many solar researchers stand for an opinion that solar activity plays a major role in driving the climate.”  In Japan there are Dr. Kunitomo Sakurai and Dr. Hiroko Miyahara.

About the IPCC, he writes: “The IPCC are fixated on global warming being caused by CO2, and simply ignore all other factors and that their attitude is scientifically immoral.”

He notes in his book, citing NoTricksZone, that Prof. Hans von Storch “Fears that science is taking a role in political decision processes” and “sea level rise fears are unwarranted because long-term tide gauge data show 21st century sea level rise will be approximately as much as the 20th century“.

Yuh Fukai is Professor Emeritus, Faculty of Science and Engineering, Chuo University Areas of Specialization: Metal Physics, Materials Science, Earth Sciences. He graduated from the Department of Physics, Faculty of Science, the University of Tokyo in 1958 with a major in geophysics. In 1963, he received his Doctor of Science for completing the doctorate program at the university’s Graduate School of Science. Dr. Fukai currently works as a visiting researcher at the Institute of Materials Structure Science and the Institute of Industrial Science, the University of Tokyo. Though he specializes in materials science as well as in metal physics, he also has interest in earth sciences as well as climate change and energy issues.