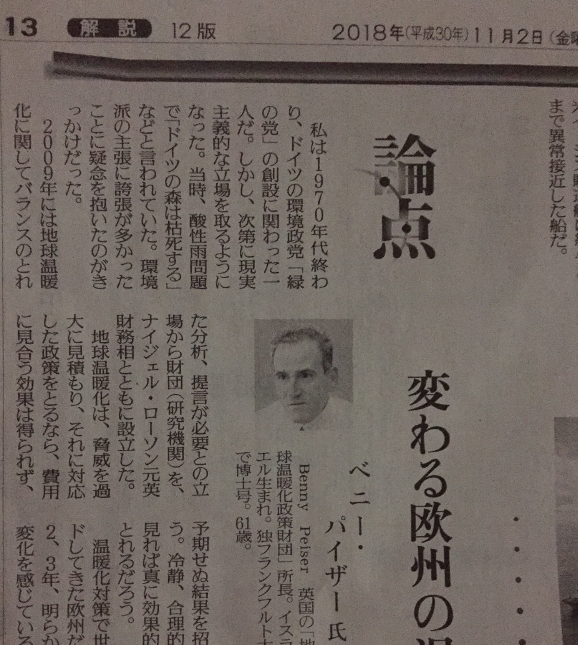 Dr. Peiser gave a lecture at the Cannon Institute for Global Studies in Tokyo on October 1st and this was the basis for the Yomiuri Shimbun feature article.

Traditionally the Japanese population is virtually universal in its belief that the global warming of the past century is mostly due to man. But according to Japanese blogger Kirye: “It’s due in large part to the fact that the overwhelming mainstream media ignore climate science dissenting views, and uncritically report alarmist claims.”

Kirye, who wishes to remain anonymous, said she became skeptical of alarmist climate science in 2013 after having read books by Dr. Kiyohiko Ikeda, Shigenori Maruyama and Kiminori Itoh — rare dissenting voices in Japan.

Dr. Peiser, who received a Ph.D. from Frankfurt University in Germany, gave a lecture titled: “The Crisis of the EU Climate Policy“.

Early green party member turned off by the “exaggeration”

The Yomiuri Shimbun article starts by mentioning how in the late 1970s Dr. Peiser was involved in creating the German environmental political party “The Greens”, but wound up taking a realistic stance after doubts over exaggerations made by the environmentalists. One example was the claim Germany forests would die due to the acid rain problem.

In 2009, together with former UK Finance Minister Nigel Lawson, Dr. Peiser established the Global Warming Policy Foundation from the standpoint that balanced analyses and recommendations regarding global warming were necessary to avoid faulty policy.

In the Yomiuri Shimbun article Dr. Peiser says public opinion has undergone a transformation in Europe and that he senses “a clear debate growing over the last couple of years”.

The Israeli born Dr. Peiser says the EU has in fact been two-faced about energy and climate policy.

The EU often claims it is ready for climate action, yet drags its feet when it comes to taking real action. “The tone has changed from consideration of environmental importance to a direction of considering a balance with the economy,” Peiser told the Yomiuri Shimbun.

He also notes that in a survey asking what is the most worrisome problem, “climate change is falling in rank” in Europe. “Problems such as immigration, economy, employment, and health are the highest now.”

In his lecture, Peiser noted the EU’s climate policies have failed to live up to the Paris Accord climate commitments to reduce CO2 emissions, have increased energy prices significantly, reduced European competitiveness, increased dependence on Russian energy and given rise to widespread public discontent.

Scaling back the subsidies

Now the energy transition to renewables is the causing Eurocrats to worry and European governments have been scaling back support for reneabkle energies through the introduction of a bidding system. “But the wind farm operators are not sure how profitable they will be. It is not a situation where building is progressing with vigor,” Dr. Peiser notes in the Yomiuri Shimbun article.

No real reductions foreseeable for Germany

He also added: “Germany will have to increase its reliance on fossil fuel power plants in order to eliminate nuclear power by 2022” and “it is impossible to substitute with unstable renewal energies that depend on the weather.”

He also believes that greenhouse gas emissions will increase over the next few years.

Dr. Peiser adds: “There are many countries in the world which are reluctant to reduce greenhouse gas emissions. In order not to lose global economic competition, it is undesirable for European countries to unilaterally reduce greenhouse gas emissions. I do not think that the policies of European governments will change dramatically, but such discussions and assertions are gradually strengthening.”

Thanks to Kirye for translating the Yomiuri Shimbun Japanese text.