Newly published macrofossil discoveries from 4 papers strongly suggest that modern warmth may still be about 3°C colder than nearly all of the last 10,000 years. 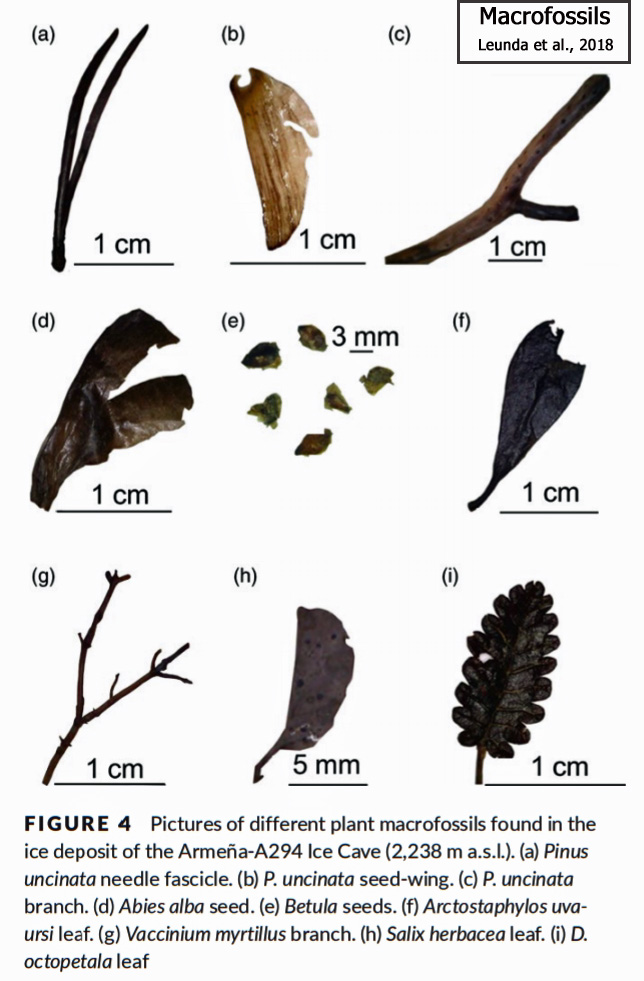 1. Permafrost is still present today in a region that was permafrost-free throughout the Holocene (until the onset of the Little Ice Age)

According to data from a new study (Sannel et al., 2018), subarctic Northern Sweden has yet to rise out of the range of frigid, permafrost-friendly temperatures coeval with of the Little Ice Age (roughly 1400 to 1900 AD).

Permafrost still exists today in regions where there was no recorded permafrost during nearly all of the Holocene, when temperatures were too warm (3°C higher than today) for permafrost to form.

These findings strongly suggest that modern warmth is nothing unusual, unprecedented, or even remarkable.  In fact, it may be said that today’s subarctic warmth may only be slightly warmer than the coldest centennial-scale period — the Little Ice Age — of the last 10,000 years.

“At all these sites the datings together with the results of the plant macrofossil analyses suggest that permafrost aggradation took place around 600–100 cal. a BP [the Little Ice Age]. … [A]t these sites there are no indications of permafrost inception prior to the Little Ice Age. … Warmer conditions during recent decades have resulted in extensive permafrost degradation in Fennoscandian palsas and peat plateaus (Sollid& Sørbel 1998; Zuidhoff& Kolstrup 2000; Luoto & Seppala 2003; Sannel & Kuhry 2011; Borge et al. 2017).”

“During peatland initiation (c. 10 000–9600 cal. a BP) the climatic conditions in the region were favourable for plant productivity with around 3 °C warmer summer temperatures compared to today (Kullman & Oberg 2015), resulting in relatively rapid peat and net carbon accumulation rates during the early Holocene.” 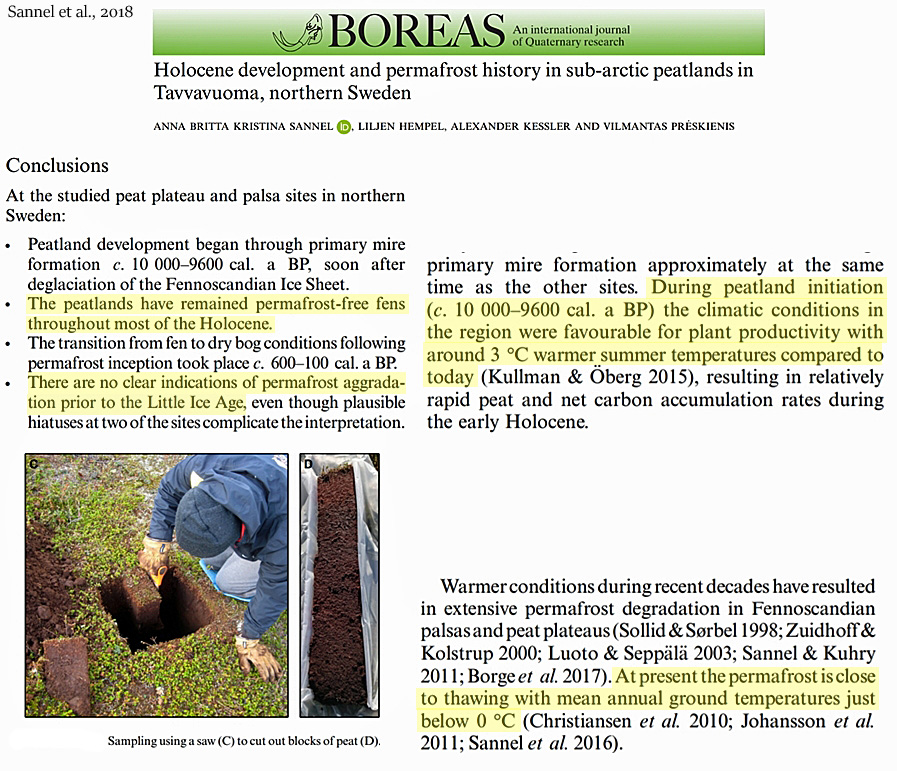 With a temperature lapse rate of 0.67°C/100 m for the region documented in the paper, this indicates temperatures were about 3.1°C warmer than today [4.6 X 0.67°C] during the Mid-Holocene. 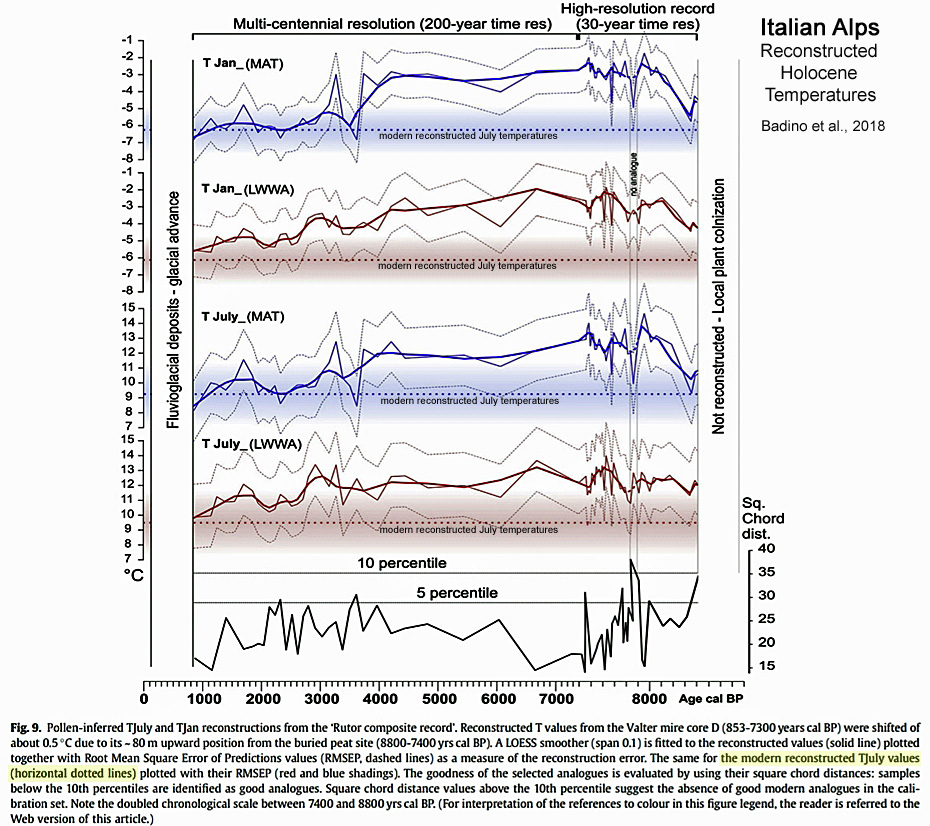 The temperature lapse rate for the Pyrenees region is 0.517°C/100 m according to a newly published paper.

Leunda et al. (2018) have published a study that shows the Mid-Holocene (about 4,500 years ago) Pyrenees timber line was 300-400 meters higher than today’s uppermost limit.

“The tree line ecotone was located at the cave altitude from 5,700 to 4,650 cal year bp, when vegetation consisted of open Pinus uncinata Ramond ex DC and Betula spp. Woodlands and timberline were very close to the site. Subsequently, tree line slightly raised and timberline reached the ice cave altitude, exceeding its today’s uppermost limit by c. 300–400 m during more than four centuries (4,650 and 4,200 cal year bp) at the end of the Holocene Thermal Maximum.” 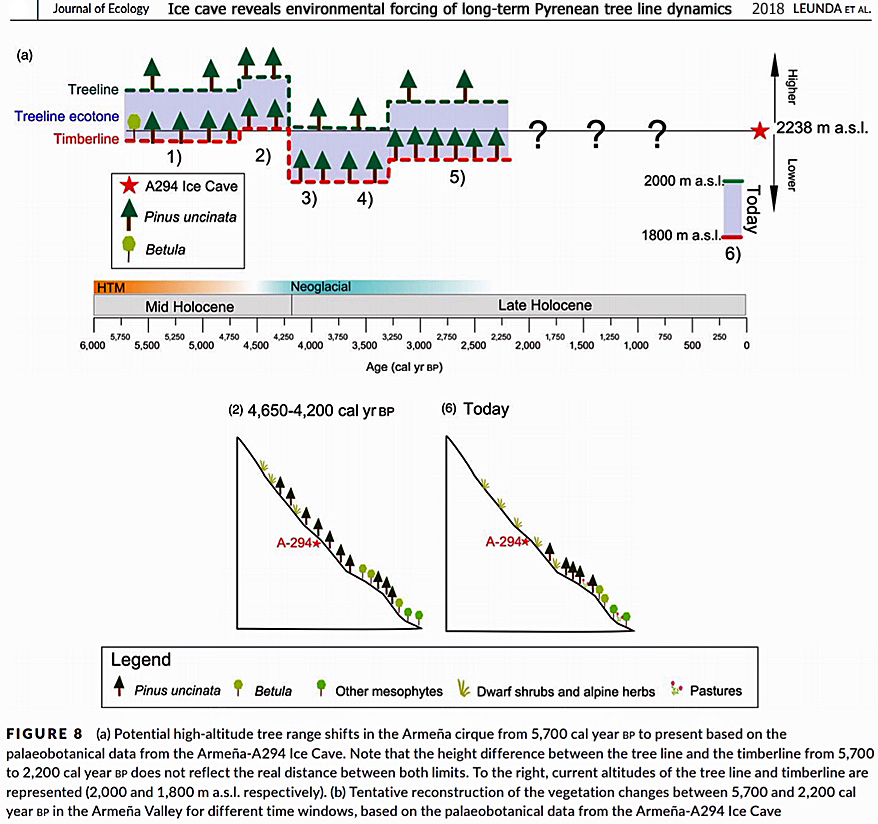 The temperature lapse rate for the Swedish Lapland region is 0.6°C/100 m.

Kullman (2018) found tree debris (trunks, cones, roots, etc.) 600 to 700 meters atop modern tree line positions that were dated to about 9,500 years ago.  Accounting for glacio-isostatic uplift, this tree line elevation implies surface air temperatures were 3.6°C higher than today during the Early Holocene.

“Conservatively drawing on the latter figure and a summer temperature lapse rate of 0.6 °C per 100 m elevation (Laaksonen 1976), could a priori mean that, summer temperatures were at least 4.2 °C warmer than present around 9500 year before present. However, glacio-isostatic land uplift by at least 100 m since that time (Möller 1987; Påsse & Anderson 2005)implies that this figure has to be reduced to 3.6 °C higher than present-day levels, i.e. first decades of the 21st century. Evidently, this was the warmth peak of the Holocene, hitherto. This inference concurs with paleoclimatic reconstructions from Europe and Greenland (Korhola et al. 2002; Bigler et al. 2003; Paus 2013; Luoto et al. 2014; Väliranta et al. 2015).”