“Peak Oil is dead. The era of hydrocarbon civilization will never end!”

“[T]here is a growing number of scientists and researchers … suggesting that these compounds [‘coal, oil, and natural gas’] must be abiogenic in origin rather than biogenic.” 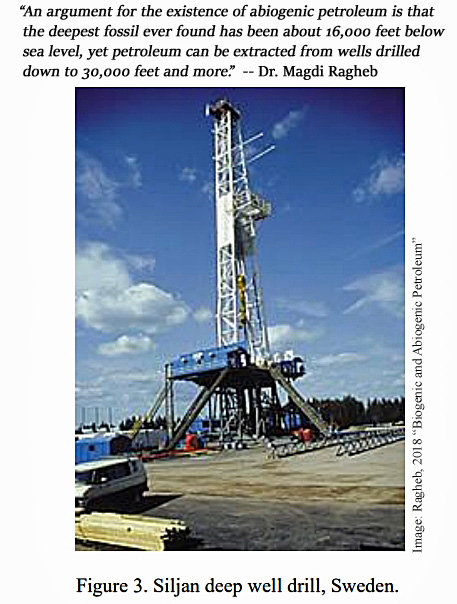 in the 21st century. New Ideas and Paradigms

“Oil-and-gas accumulations are traced in all types of rocks and at all stratigraphic levels both onshore and offshore. In fact, we live in a hydrocarbon civilization. Our planet is actually a large overall petroleum polygon.  New evidence and facts refuted the myth of “Peak Oil”. Oilfields can be discovered in most unexpected places and conditions. The oil recovery rates depend on various natural, technogenic, and market fluctuations including human factor.”

“A great variety of hydrocarbon sources, both conventional and unconventional, have been discovered and are still being discovered; innovative methods and technologies for hydrocarbon production and utilization are being created; on the whole it shows that Peak Oil is dead. The era of hydrocarbon civilization will never end!”

“Two schools of thought exist about the origin of petroleum: a Western school suggesting that its origin is biogenic resulting from the decay of organic biological matter and stored in sedimentary basins near the Earth’s surface, and a Ukrainian-Russian school proposing that it is abiogenic with an inorganic origin deep within the Earth’s crust dating back to the time of the formation of the Earth.  The first suggestion implies a finite resource, whereas the second implies an almost unlimited one.  Each school dismisses the other one, leading to interesting discussions and discourses.”

“An argument for the existence of abiogenic petroleum is that the deepest fossil ever found has been about 16,000 feet below sea level, yet petroleum can be extracted from wells drilled down to 30,000 feet and more.  The argument is advanced that if a fossil was once living matter, it had to be on the surface.  If it did turn into petroleum, at or near the surface, and since petroleum has a lower density than water it would be expected to rise on top of water not go under it.  The counter-argument is that these deep deposits may have resulted from crustal movements or were buried by bolide impacts.”

“When the Earth was formed it should have contained substantial amounts of carbon and hydrocarbons.  It is also possible that the heat from radioactive decay may be contributing to the creation of hydrocarbons in the Earth’s mantle.”

“The abiogenic petroleum formation hypothesis holds that as petroleum is drawn out of the known reservoirs through petroleum wells, the field pressure is slightly reduced, thereby allowing more deep petroleum to migrate up from the mantle and recharge the reservoir from below.  This suggests that decreasing the existing reservoirs’ pressure should be attempted in view of recharging them, rather than increasing their pressure through water and gas injection.”

Which economic aspects would have the
greatest impact in the European Union for
switching from traditional to renewable energy?

“Consensus on the creation and origin of petroleum currently held by western science points to ancient microorganisms, plant matter and their subsequent burial over millions of years after which immense pressure and temperature caused by the material collecting on top of them resulted in transformation of solid, liquid and gas formations known as coal, oil and natural gas. This type of theory is referred to as biogenic or Western theory on the creation and origin of oil (Summers, 2015).

However, there is a growing number of scientists and researchers challenging such a theory, indicating that organic compounds are extremely common in space rock and atmospheres of other planets in our solar system (Bansal, 2015), suggesting that these compounds must be abiogenic in origin rather than biogenic.”

“Popularity of biogenic theory can be attributed to the 17th and 18th century scientific understanding of carbon-based compounds and importance of life in their creation (Summers, 2015). Additionally, different types of organic matter and residue was found in various depths and layers of rock formations deep underground, which combined with extreme pressure, temperature and other factors could have resulted in huge concentrated stores of oil, as extraction of oil from fossilised organic matter is proved true (Heinberg, 2018).”

“The opposing group of abiogenic theory supporters, also called Russian-Ukrainian group explain inorganic origin of oil because of chemical reactions of minerals rather than by decay of organic matter, further deducting that oil is a renewable resource found in immense quantities in presently unreachable depths (Ragheb, 2018). Hydrocarbons are a chemical compound consisting of a combination of hydrogen and carbon atoms, together in great quantities making up the composition of oil (EIA, 2017b).”

“Although it is widely supported fact that oil can be retrieved from fossilised organisms (Penner, 2018) and is conjointly backed by decades of data and technological development, some newer research has proven that part of the chemistry suggested by the abiogenic theory supporters to be surprisingly valid and worth investigating.”

“Today, 20 years have passed since the publication of the ground-breaking Scientific American report [1]. The expected world peak has not arrived, at least in terms of a reduction of the global supply of liquid fuels [11] and, in general, the concept of peak oil has faded from the mainstream discussion as well as from the scientific literature. ASPO international seems to have disappeared as an active association around 2012–2013, although some national branches of the association still exist. The generally accepted explanation for the fading interest in the concept attributes it to the ‘wrong predictions’ of the date of the peak and, from there, most mainstream reports tend to define the whole concept as wrong and misleading.”