Browse: Home / 2018 / December / 03 / New Research: Methane Emissions From Livestock Have No Detectable Effect On The Climate

Agrobiologist and scientific researcher Dr. Albrecht Glatzle, author of over 100 scientific papers and two textbooks, has published research that shows “there is no scientific evidence, whatsoever, that domestic livestock could represent a risk for the Earth’s climate” and that the “warming potential of anthropogenic GHG [greenhouse gas] emissions has been exaggerated”. 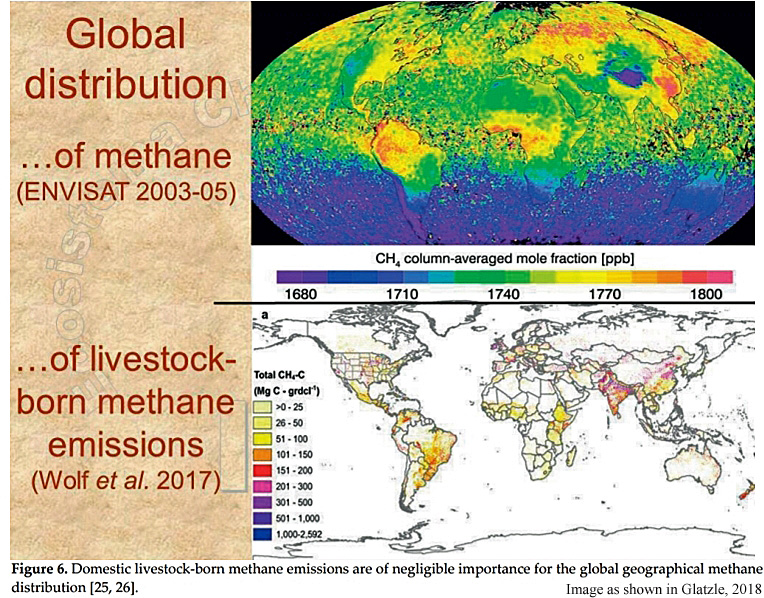 Domestic Livestock and Its
Alleged Role in Climate Change

“Our key conclusion is there is no need for anthropogenic emissions of greenhouse gases (GHGs), and even less so for livestock-born emissions, to explain climate change. Climate has always been changing, and even the present warming is most likely driven by natural factors. The warming potential of anthropogenic GHG emissions has been exaggerated, and the beneficial impacts of manmade CO2 emissions for nature, agriculture, and global food security have been systematically suppressed, ignored, or at least downplayed by the IPCC (Intergovernmental Panel on Climate Change) and other UN (United Nations) agencies. Furthermore, we expose important methodological deficiencies in IPCC and FAO (Food Agriculture Organization) instructions and applications for the quantification of the manmade part of non-CO2-GHG emissions from agro-ecosystems. However, so far, these fatal errors inexorably propagated through scientific literature. Finally, we could not find a clear domestic livestock fingerprint, neither in the geographical methane distribution nor in the historical evolution of mean atmospheric methane concentration.”

1. “In order to get the effective manmade part of the emissions from managed ecosystems, one has to subtract the baseline emissions of the respective native ecosystems or of the pre-climate changemanaged ecosystems from those of today’s agro-ecosystems (Figure 4). Omitting this correction leads to a systematic overestimation of farm-born non-CO2 GHG emissions. Scientific publications generally do not take this consideration into account, as farm-born CH4 and N2O emissions are consistently interpreted at a 100% level as an additional anthropogenic GHG source, just like fossil fuel-born CO2. As the mentioned IPCC guidelines [2007] are taken for the ultimate reference, this severe methodological deficiency propagated through scientific literature.”

2. “Dung patches concentrate the nitrogen ingested from places scattered across the pasture.  Nichols et al. [2016] found no significant differences between emission factors from the patches and the rest of the pasture, which means the same amount of nitrous oxide is emitted whether or not the herbage passes livestock’s intestines. However, the IPCC and FAO do consider mistakenly all nitrous oxide leaking from manure as livestock-born and therefore manmade.”

3. “Between 1990 and 2005, the world cattle population rose by more than 100 million head (according to FAO statistics). During this time, atmospheric methane concentration stabilized completely. These empirical observations show that livestock is not a significant player in the global methane budget [Glatzle, 2014]. This appreciation has been corroborated by Schwietzke et al. [2016] who suggested that methane emissions from fossil fuel industry and natural geological seepage have been 60–110% greater than previously thought.”

4. “When looking to the global distribution of average methane concentrations as measured by ENVISAT (Environmental Satellite) [Schneising et al., 2009] and the geographical distribution of domestic animal density, respectively [Steinfeld et al., 2006], no discernible relationship between both criteria was found [Glatzle, 2014].”

6. “The idea of a considerable livestock contribution to the global methane budget relies on theoretical bottom-up calculations. Even in recent studies, e.g., [Mapfumo et al., 2018], just the emissions per animal are measured and multiplied by the number of animals. Ecosystemic interactions and baselines over time and space are generally ignored [Glatzle, 2014]. Although quite a number of publications, such as the excellent most recent FCRN report (Food Climate Research Network) [2017], do discuss extensively ecosystemic sequestration potentials and natural sources of GHGs, they do not account for baseline emissions from the respective native ecosystems when assessing manmade emissions of non-CO2 GHGs from managed ecosystems. This implies a systematic overestimation of the warming potential, particularly when assuming considerable climate sensitivity to GHG emissions.”

7. “[W]e could not find a domestic livestock fingerprint, neither in the geographical methane distribution nor in the historical evolution of the atmospheric methane concentration. Consequently, in science, politics, and the media, climate impact of anthropogenic GHG emissions has been systematically overstated. Livestock-born GHG emissions have mostly been interpreted isolated from their ecosystemic context, ignoring their negligible significance within the global balance. There is no scientific evidence, whatsoever, that domestic livestock could represent a risk for the Earth’s climate.”

8. “[E]ven LA Chefs Column [Zwick, 2018], in spite of assuming a major global warming impact of methane, came to the conclusion: ‘When methane is put into a broader rather than a reductive context, we all have to stop blaming cattle (‘cows’) for climate change.'”

19 responses to “New Research: Methane Emissions From Livestock Have No Detectable Effect On The Climate”