Global Cooling On The Horizon? 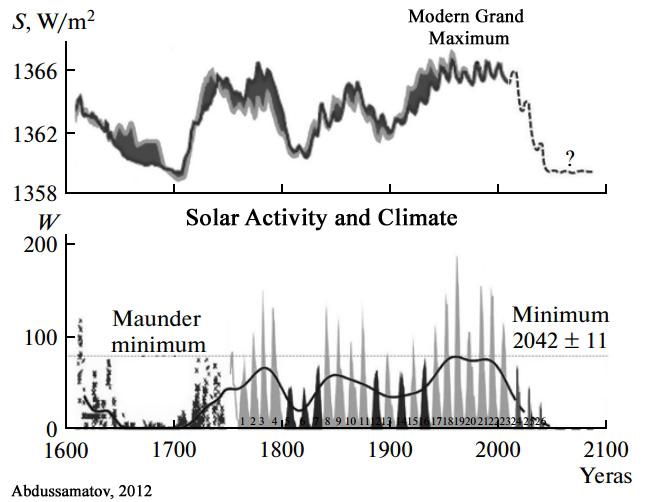 When it comes to the Sun’s influence on climate, one conclusion is certain: there is no widespread scientific agreement as to how and to what extent solar activity and its related parameters (i.e., galactic cosmic rays, geomagnetic activity, solar wind flux) impact changes in the Earth’s temperature and precipitation.

The disagreement is so chasmic and the mechanisms are so poorly understood that scientists’ estimates of the influence of direct solar irradiance forcing between the 17th century and today can range between a negligible +0.1 W m-2 to a very robust +6 W m-2 (Egorova et al., 2018; Mazzarella and Scafetta, 2018).

“There is no consensus on the amplitude of the historical solar forcing. The estimated magnitude of the total solar irradiance difference between Maunder minimum and present time ranges from 0.1 to 6 W/m2 making uncertain the simulation of the past and future climate.”  (Egorova et al., 2018)

“According to the IPCC (2013), solar forcing is extremely small and cannot induce the estimated 1.0–1.5 °C since the LIA. However, thesolar radiative forcing is quite uncertain because from 1700 to 2000 the proposed historical total solar irradiance reconstructions vary greatly from a minimum of 0.5 W/m2 to a maximum of about 6 W/m2 (cf..: Hoyt and Schatten 1993; Wang et al. 2005; Shapiro et al. 2011). Moreover, it is believed that the sun can influence the climate also via a magnetically induced cosmic ray flux modulation (e.g.: Kirkby 2007) or via heliospheric oscillation related to planetary resonances (e.g.: Scafetta 2013, 2014b; Scafetta et al. 2016, and others). Since solar and climate records correlate quite significantly throughout the Holocene (cf: Kerr 2001; Steinhilber et al. 2012; Scafetta 2012, 20104b), the results shown herein may be quite realistic, although the exact physical mechanisms linking astronomical forcings to climate change are still poorly understood.”  (Mazzarella and Scafetta, 2018)

“Cold period during 1645–1706 (Maunder solar minimum).  Cold period during 1810–1838 (Dalton solar minimum).  Warm period during the mid-20th and 21st centuries (modern solar maximum).  LIA  [Little Ice Age] was characterized by a cold phase having lower annual and summer temperatures relative to the long-term mean, consistent with the solar minima. … The record shows rapid cooling since the start of the Spörer Minimum, which intensified during the Maunder Minimum (with the lowest estimated temperature being 2 °C lower than the recent average). A later increase in the temperature and another slight cooling probably coincided with the Dalton Minimum. Particularly cold winters occurred during the MCA (from 1090 to 1179), during the LIA onset (1350) and from the late 15th to early 16th centuries. Winter temperatures would have been approximately 0.5 °C lower during the LIA (1500–1900) than during the 20th century. … [T]he Maunder Minimum coincided with a cold period from 1645 to 1706, and the Dalton Minimum (1796–1830) is correlated with a cold stage spanning the years from 1810 to 1838. Four warm periods (1626–1637, 1800–1809, 1845–1859, and 1986–2012) coincided with periods of increased solar activity.” (Oliva et al., 2018)

“By the 1270s the era of high solar irradiance responsible for the Medieval Climate Anomaly had ended and as the Wolf Solar Minimum started to bite, the transition began to the cooler global temperatures and altered and less stable atmospheric circulation patterns that characterised the LIA (Campbell 2016, 2–6, 198–208).”  (Collet and Schuh, 2018)

“For the last 1000 years, the world climate experienced changes that quite closely corresponded to variations in SA [solar activity]: in the 11th–13th centuries, when SA was high, there was a warm period (the “medieval climatic optimum”), and two distinct temperature drops in the small ice age (16th–17th centuries) correspond to the Maunder and Spörer minima. A general rise in the level of SA [solar activity] occurred after the completion of the Maunder minimum [1700s], and the world climate became warmer during most of this period.”  (Zherebtsov et al., 2018) 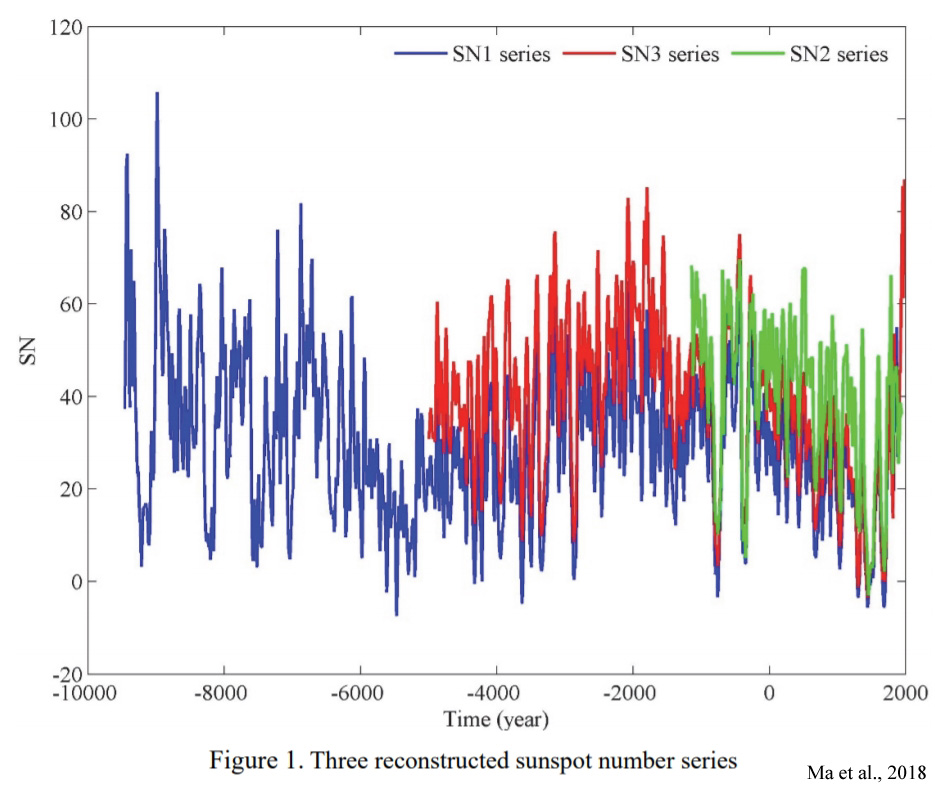 Many scientists have predicted an imminent solar minima period will reach its nadir in the coming few decades.

The lowered solar activity is forecast to reduce the Earth’s temperatures, perhaps inducing a “return of a New Little Ice Age” (Mörner, 2018), or possibly a cooling of “0.4°C-0.8°C”, similar to past cold periods (Kaftan et al., 2018).

“Analysis results of the average annual sea levels in the Caspian Sea obtained from ground and satellite observations, corresponding to solar activity characteristics, magnetic field data, and length of day are presented. Spectra of the indicated processes were investigated and their approximation models were also built. Previously assumed statistical relationships between space-geophysical processes and Caspian Sea level (CSL) changes were confirmed. A close connection was revealed between the low-frequency models of the solar and geomagnetic activity parameters and the CSL [Caspian Sea level] changes. … The results of the comparison of the spectra (Fig. 1) confirm the existence of oscillations of close periods both at the level of the Caspian Sea and in solar activity for the low-frequency part of the spectra. There are peaks in the power spectra near about a one-century and two-century cycles.”

“The inverse relationship between the sunspot activity and the fluxes of galactic cosmic rays (GCR) in the atmosphere and at the Earth surface (Forbush-effect) causes the variation of ion-electron density in the troposphere. The ion-electron density is very low in the troposphere comparing to the upper atmosphere. However it will affect the aerosol production rate, the cloud production rate and total cloud coverage over the Earth surface [Dergachev et al., 2012], [Svensmark and Friis-Christensen, 1997]. The effect could be slow, but significant planetary cooling (on the order of 0.4–0.8°C) can occur during the epochs of grand solar minima [Damon and Sonett, 1991], such as the Dalton minimum (1794/98-1833), Maunder minimum (1640–1720), Spoerer minimum (1420–1550), Wolf minimum (13th century), Oort minimum (11th century) and the newly started grand solar minimum after 2008 [Komitov and Kaftan, 2013]. The Gleissberg-Gnevishev solar minimum (1898–1923) could also be labeled as a grand solar minimum. The cooling effect could cause a vaporization decrease from Caspian Sea. Another parallel event could cause an increase of rainfall in Eastern Europe, including the Volga drainage basin. The increase of rainfall intensity could also increase the Volga debit. If the decreasing vaporization effect from the Caspian Sea surface appears simultaneously, it could lead to CSL upward tendencies during the epochs of grand solar minima, including the first half of 21st century.”

“A simple harmonic model based on the 9.98, 10.9 and 11.86 year oscillations hindcast reasonably well the known prolonged periods of low solar activity during the last millennium such as the Oort, Wolf, Sporer, Maunder and Dalton minima, as well as the seventeen 115-year long oscillations found in a detailed temperature reconstruction of the Northern Hemisphere covering the last 2000 years. The millennial three-frequency beat cycle hindcasts equivalent solar and climate cycles for 12,000 years.”

“Finally, the harmonic model herein proposed reconstructs the prolonged solar minima that occurred during 1900-1920 and 1960-1980 and the secular solar maxima around 1870-1890, 1940-1950 and 1995-2005 and a secular upward trending during the 20th century: this modulated trending agrees well with some solar proxy model, with the ACRIM TSI satellite composite and with the global surface temperature modulation since 1850. The model forecasts a new prolonged grand solar minimum during 2020-2045, which would be produced by the minima of both the 61 and 115-year reconstructed cycles. The demonstrated geometrical synchronicity between solar and climate data patterns with the proposed solar/planetary harmonic model rebuts a major critique (by Smythe and Eddy, 1977) of the theory of planetary tidal influence on the Sun. Other discussions are added about the evidences of an influence of the resonances of the solar system on solar activity explaining also the Jose (159-185 year), the Seuss (200-220 year) and Hallstatt (2100-2500 year) oscillations.”

“The concept of an anthropogenic global warming (AGW) driven by the increase in atmospheric CO2 is compared to the concept of a natural global warming (NGW) driven by solar variability. The application of the AGW concept only rests on models, whilst the NGW concept rests on multiple observational and evidence-based facts. … Several scientists (e.g. [Landscheidt, 2003] [Charvátová, 2009] [Mörner, 2010] [ Mörner, 2015] [Abdussamatov, 2016]) have shown that we, in fact, are approaching a New Grand Solar Minimum in about 2030-2050. In analogy with the documented climate conditions during the Spörer, Maunder and Dalton Minima, we may expect the return of a New Little Ice Age as illustrated in Figure 5.” 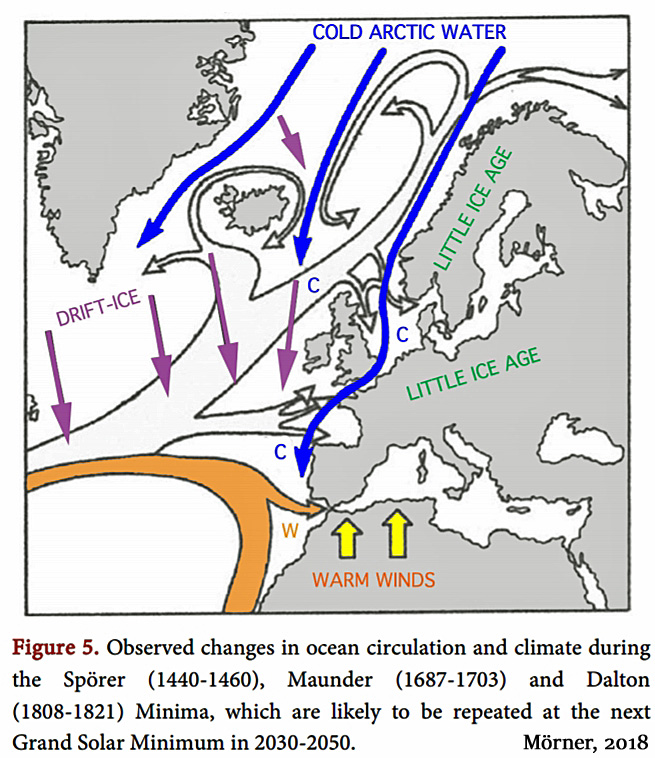 “The effect of the Sun’s activity on Earth’s climate has been identified since the 1800s. However, there are still many unknowns regarding the mechanisms connecting the Earth’s climate to the variation in solar irradiance. Climate modelling that implements the solar sciences is a novel approach that accounts for the considerable effect that natural factors have on the climate, especially at regional level. This paper discusses the noticeable effect that planet oscillations have on the Sun’s activity, which gives a very good correlation with the observed patterns in global surface temperatures, rainfall records and sea levels. In agreement with many studies that have identified a 60-year cycle in the variation of Earth’s temperature, it is expected that surface temperatures will reach a trough of the cycle around 2030-2040.”

“Furthermore, considering the influence of the Solar Inertial Motion, a solar slowdown is predicted for Solar Cycles 24 and 25, which will create a weak grand minimum. It is anticipated that this weak grand minimum will be reflected in a dampening effect of global temperatures, and a subsequent moderation in the rate of sea level rise.”

“Current predictions on Solar activity show that we are in a low sunspot cycle, which is similar to that of the 1900 Minimum, and subsequent cycles are predicted to have even lower Solar activity, and therefore a drop in global temperatures is expected [27]–[29].”

“Global temperature evolution did not proceed directly along the nominal 30th sine half-wave line, because the fifth climate driving mechanisms, the 62-year SPO cycle, modifies the evolution line with consistent warm peaks. In the previous paper, Holocene part 7, we proved the consistency of this SPO cycle by demonstrating previous 62-year temperature peaks on a multi-millennial scale. This exact timing of warm peaks cannot be of tropospheric origin, because, using a Stocker quote: “The internal atmosphere-ocean climate system is unable to produce a forcing with a well-defined periodicity” (Stocker and Mysak, 1992). For this reason, this climate forcing is caused by solar – planetary oscillations (Scafetta, 2013). For a 60+ year cycle of external forcing, the SPO cycle is the best candidate. We add the abstract conclusion made in the latest AMO study of (Murphy, 2017): “We conclude that there is an essential role for external forcing in driving the observed AMO”.

“Only the PaKern Recognition analysis is capable to explain each single temperature peak of the Holocene. The under-performance of other models and simulations can easily be explained. Fundamental causes are: 1. Their omission of decadal and centennial cosmic Earth orbital variations, and 2. The omission of solar motion variations. Instead, models and simulations exclusively center on internal atmosphere-ocean system variables, combined to some extremely long Milankovitch features, 20 – 40 kyr in length, with which centennial and single millennium features cannot be explained. Therefore, under-performance must be the logical result (Scafetta, 2013).”

“We emphasize again, that the present fourth flat temperature plateau, since 2004 AD, will continue until 2046 AD, the end of the recent 62-year SPO cycle.”

“The current Modern Warming will continue until the solar magnetic field decreases in strength. If one adds the 350-year cycle from the McCracken result to the center of the Maunder Minimum which was centered in 1680, one would have a Grand Minimum centered in the year 2030.”

Thus far in 2018, 92 scientific papers have been located that link solar forcing to climate changes.  This is an incomplete compilation and it is likely to swell to over 100 papers upon further review.

Such a large volume of research devoted to finding connections between the Sun’s variability and its effect on the Earth’s climate system would seem to contradict the conclusion that there is widespread consensus that the Sun’s climate impact is negligible.