Yesterday we wrote about a study that told us the data do not support that weather blockings are occurring more often than they used to. Some alarmist media and scientists have claimed that the heavy snowfalls in the Alps are happening due to manmade global warming.

Swiss meteorologist: Such snowfalls “nothing unique” for Alps

Yesterday one of Europe’s most high profile meteorologists, Jörg Kachelmann, penned an opinion piece at t-online.de reminding the public that heavy snow events in the Alps, such as the one we are now experiencing, are in fact nothing unique and that it is not a catastrophe.

In the days ahead, many parts of the Alps are expecting up to another meter of new snow, yet, according to Kachelmann, this should not pose any problems to buildings and structures – if their construction indeed adhered to the applicable building codes.

“Nothing to do with climate change”

Kachelmann adds later in his t-online piece: “1. The snowfalls are nothing unique so far for the Alps. 2. They have nothing to do with climate change.”

The veteran Swiss meteorologist adds that the heavy snow in the Alps “are making people happy because they ensure the ski season will extend until Easter.”

Snow is in fact welcome

Moreover, they are good for the glaciers, and will help relieve the drought conditions seen in Europe last year. The Swiss meteorologist adds:

They [the snowfalls] are making the media happy as well because weather catastrophes get many clicks. However, the current weather situation is not a catastrophe. Human lives (except in the mentioned 0.1 percent problem) are only in danger if people behave inappropriately.”

Kachelmann also thinks the media overhype now taking place may be unnecessarily scaring people away from booking ski trips to the Alps, a region where massive amounts of snow are common.

Meanwhile, German meteorologist Dominik Jung of wetter.net reported that a Russian “Beast from the East” looks to be in the works for Europe for the weeks ahead:

According to Jung, who cites US and European weather models, beginning January 20 much greater cold will be invading large parts of Europe. And by January 25, the cold conditions could deepen and become extreme.

Northern hemisphere “under the gun” 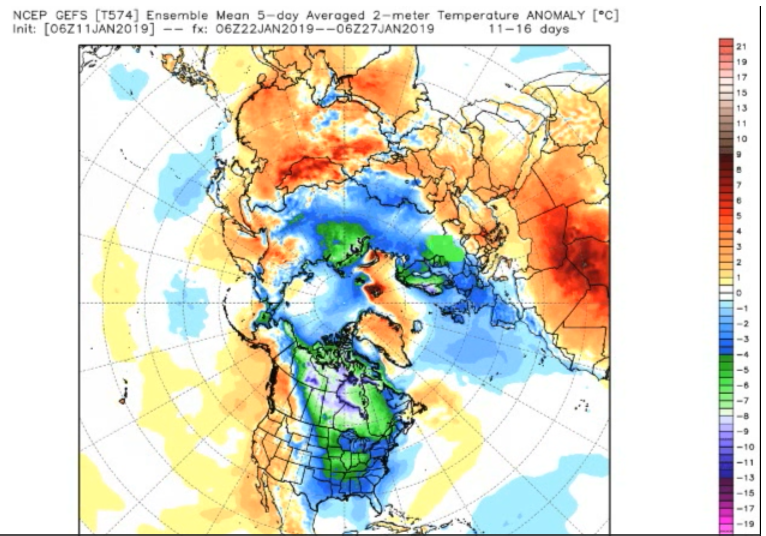 Cold to grip Europe, North America and Asia in the weeks ahead, models suggest.

Once this gets here, until March, these areas and these areas, are under the gun. Repetitive snow threats and bitter cold relative to averages, and it’s coming at the coldest time of the year.”