By Pierre Gosselin
and Kirye

Today any warming found anywhere almost always gets blamed on heat supposedly getting trapped by rising atmospheric CO2 concentrations. Moreover, activist scientists insist we ignore all other powerful factors such as solar and oceanic cycles.

In fact these activists have become so extreme that they insist that record cold today is caused by warming.

But as people learned already in the first grade, the earth’s surface warms when the sun shines on it, and tends to cool when clouds obstruct the sun.

Solar radiation at the surface has risen over the past decades

In Japan, the Japanese Meteorology Agency (JMA) has 8 stations that measure solar radiation reaching the surface, and many other for recording temperature.

Data from the 8 stations recording solar radiation are plotted since 1999 (i.e. 20 years) as follows: 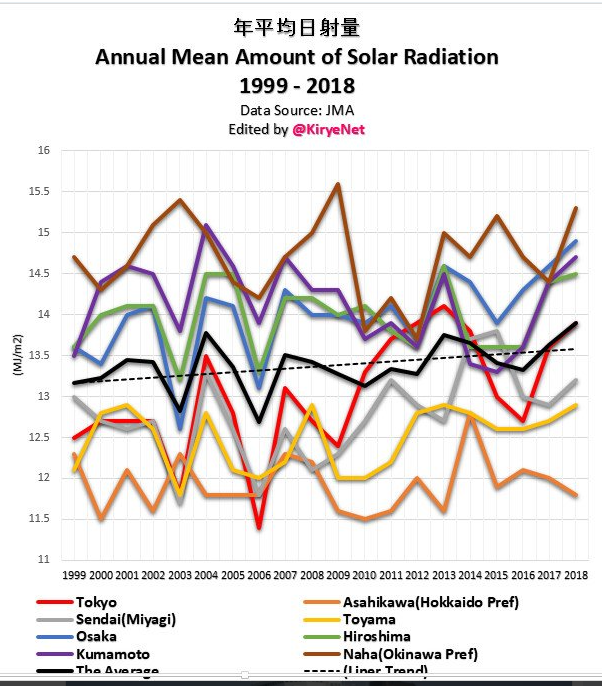 The black curve with the dashed linear trend line in the middle of the pack is the mean of all 8 stations. As we can see, these 8 stations have seen a clear upward trend since 1999.

Next follows the annual mean temperature chart for the same 8 stations: 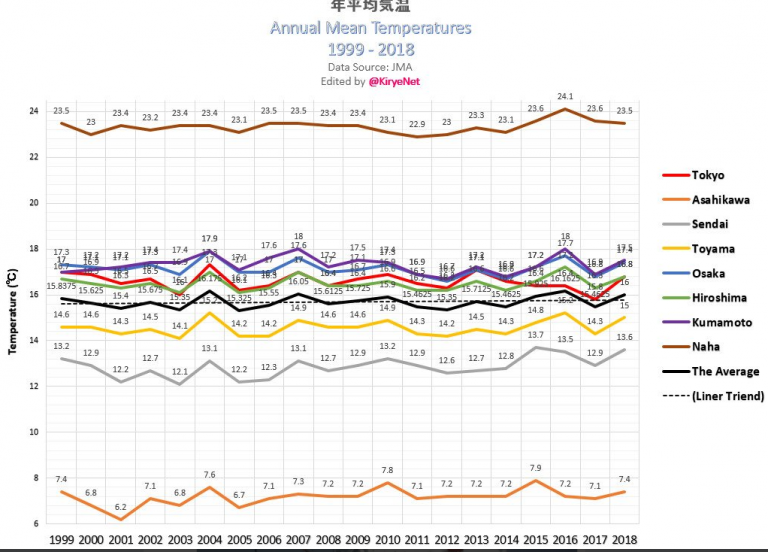 As the chart above shows, the annual mean temperature for the 8 stations has risen modestly over the past 20 years – in line with solar radiation.

The solar radiation data in fact go back to 1961, and we’ve plotted that data as follows, along with the mean annual temperature for the same 8 stations:

With all the extra solar energy, and in combination with urban development, it should not be a surprise that we’ve seen a warming.

If we had seen the same temperature rise without an increase in solar radiation and urban development, and ignoring oceanic factors, then we might assume a possible “greenhouse” effect. But the charts make it clear that Japan’s warming had very little to do with CO2.

So why would solar radiation be increasing? Obviously less cloud cover, which have nothing to do with CO2, but rather with natural solar and oceanic cycles. And no, CO2 does not drive either one.

Oceans cycles dominate over other regions

In the far north, for example, the sun is much weaker and so probably has a lesser role. So other factors such as natural ocean cycles likely have major impacts on mean annual temperature trends and ice melt. Warm oceanic phases release more moisture into the atmosphere which in turn has profound a warming effect in polar regions, for example at polar outpost Spitzbergen.

Ole Humlum, Danish professor emeritus of physical geography at the University of Oslo, believes that the future forecasts in the recently presented IPCC climate report are “not well founded”, and presents a chart that shows that the AMO is clearly a huge driver: 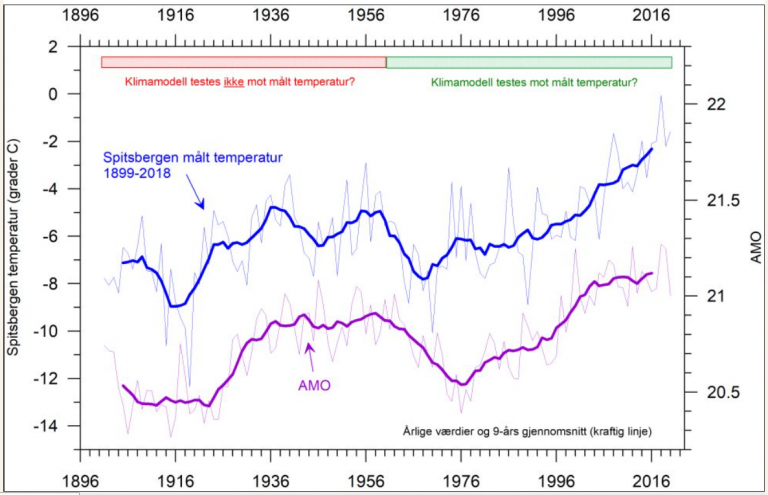 The graph shows temperature fluctuations back to the end of the 19th century. Chart: Skjermdump.

Obviously in most regions globally, other factors are very much behind the warming of the past 150 years, and not CO2.

15 responses to “Land Of The Warming Sun: Japan Has Seen Solar Radiation Rise 1015 Over Past 60 Years!”