In a new paper, two astrophysicists shred the IPCC-preferred and model-based PMOD solar data set and affirm the ACRIM, which is rooted in observation and shows an increase in total solar irradiance (TSI) during the 1980-2000 period. They suggest a “significant percentage” of recent climate change has been solar-driven. 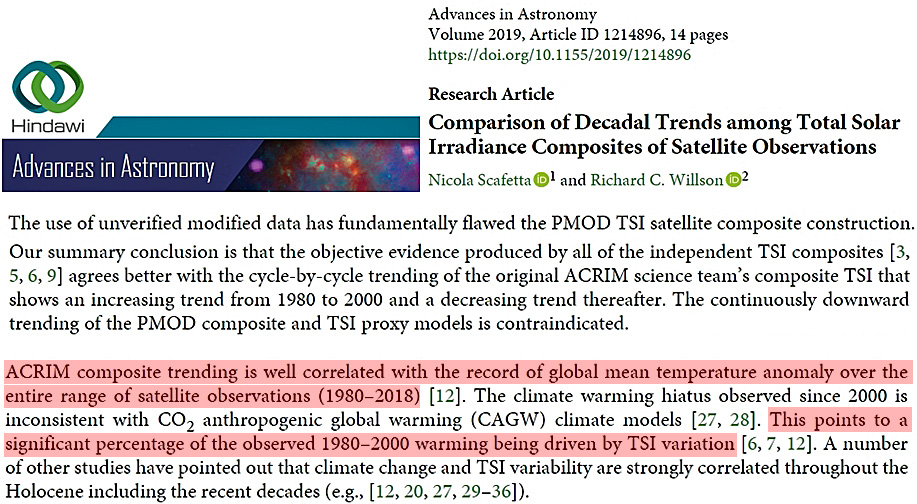 I. The PMOD is based on proxy modeled predictions, “questionable” modifications, and degraded, “misinterpreted” and “erroneously corrected” results

• “The PMOD rationale for using models to alter the Nimbus7/ERB data was to compensate for the sparsity of the ERBS/ERBE data and conform their gap results more closely to the proxy predictions of solar emission line models of TSI behavior.”

• “PMOD’s modifications of the published ACRIM and ERB TSI records are questionable because they are based on conforming satellite observational data to proxy model predictions.”

• “The PMOD trend during 1986 to 1996 is biased downward by scaling ERB results to the rapidly degrading ERBE results during the ACRIM-Gap using the questionable justification of agreement with some TSI proxy predictions first proposed by Lee III et al.(1995).”

• “PMOD misinterpreted and erroneously corrected ERB results for an instrument power down event.”

• “PMOD used overlapping comparisons of ACRIM1 and ACRIM2 with ERBE observations and proxy models to construct their first composite. Other PMOD composites [17, 18] used different models of the ERBE-ACRIM-Gap degradation. The result of these various modifications during the ACRIM-Gap was that PMOD introduced a downward trend in the Nimbus7/ERB TSI data that decreased results by 0.8 to 0.9 W/m2 (cf. [18, 20]).”

II. The PMOD TSI composite “flawed” results were an “unwarranted manipulation” of data intended to support AGW, but are  “contraindicated”

• “The dangers of utilizing ex-post-facto corrections by those who did not participate in the original science teams of satellite experiments are that erroneous interpretations of the data can occur because of a lack of detailed knowledge of the experiment and unwarranted manipulation of the data can be made based on a desire to support a particular solar model or some other nonempirical bias. We contend that the PMOD TSI composite construction is compromised in both these ways.”

• “[O]ur scientific knowledge could be improved by excluding the more flawed record from the composite. This was the logic applied by the ACRIM team. In point of fact PMOD failed to do this, instead selecting the ERBE results that were known to be degraded and sparse, because that made the solar cycle 21–22 trend agrees with TSI proxy models and the CAGW explanation of CO2 as the driver of the global warming trend of the late 20th century.”

• “The use of unverified modified data has fundamentally flawed the PMOD TSI satellite composite construction.”

• “The consistent downward trending of the PMOD TSI composite is negatively correlated with the global mean temperature anomaly during 1980–2000. This has been viewed with favor by those supporting the CO2 anthropogenic global warming (CAGW) hypothesis since it would minimize TSI variation as a competitive climate change driver to CO2, the featured driver of the hypothesis during the period (cf.: [IPCC, 2013, Lockwood and Fröhlich, 2008]).”

• “Our summary conclusion is that the objective evidence produced by all of the independent TSI composites [3,5, 6, 9] agrees better with the cycle-by-cycle trending of the original ACRIM science team’s composite TSI that shows an increasing trend from 1980 to 2000 and a decreasing trend thereafter. The continuously downward trending of the PMOD composite and TSI proxy models is contraindicated.”

III. The ACRIM TSI supports the conclusion that “a significant percentage” of climate change in recent decades was driven by TSI variation 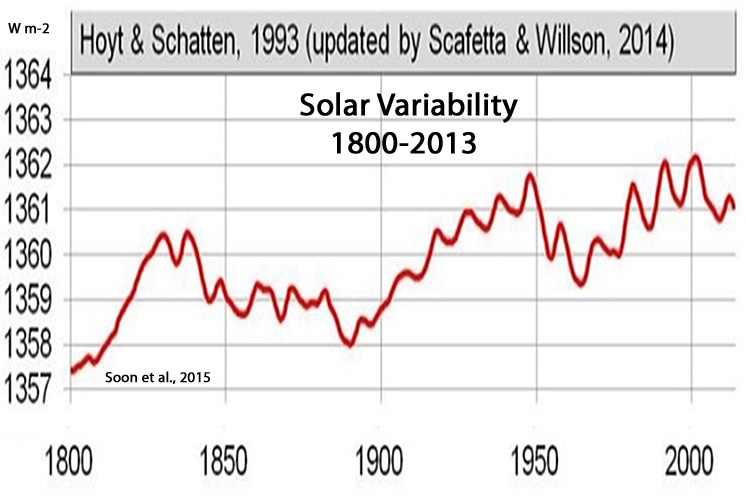 • “The global surface temperature of the Earth increased from 1970 to 2000 and remained nearly stable from 2000 and 2018. This pattern is not reproduced by CO2 AGW climate models but correlates with a TSI evolution with the trending characteristics of the ACRIM TSI composite as explained in Scafetta [6,12, 27] and Willson [7].” 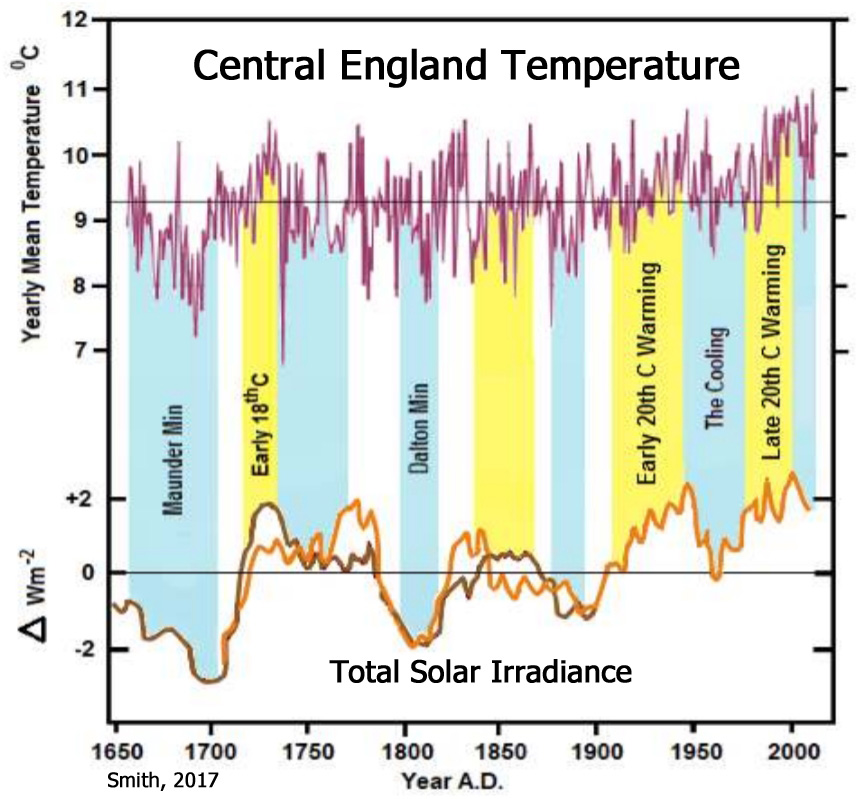 V. The Mechanism: Higher solar activity on decadal-scales limits the seeding of clouds, which means more solar radiation is absorbed by the surface, warming the Earth 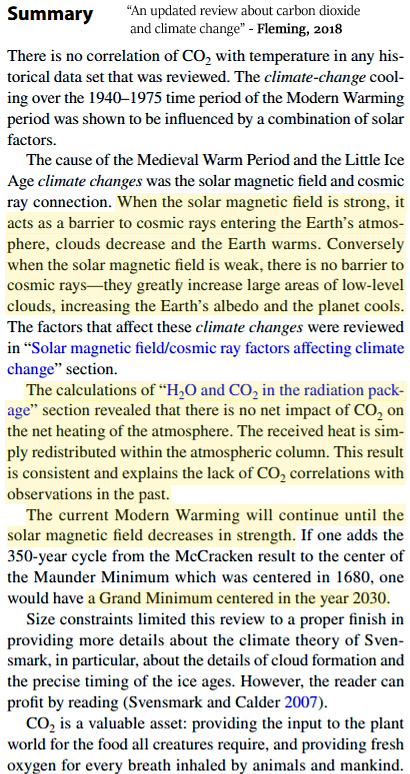 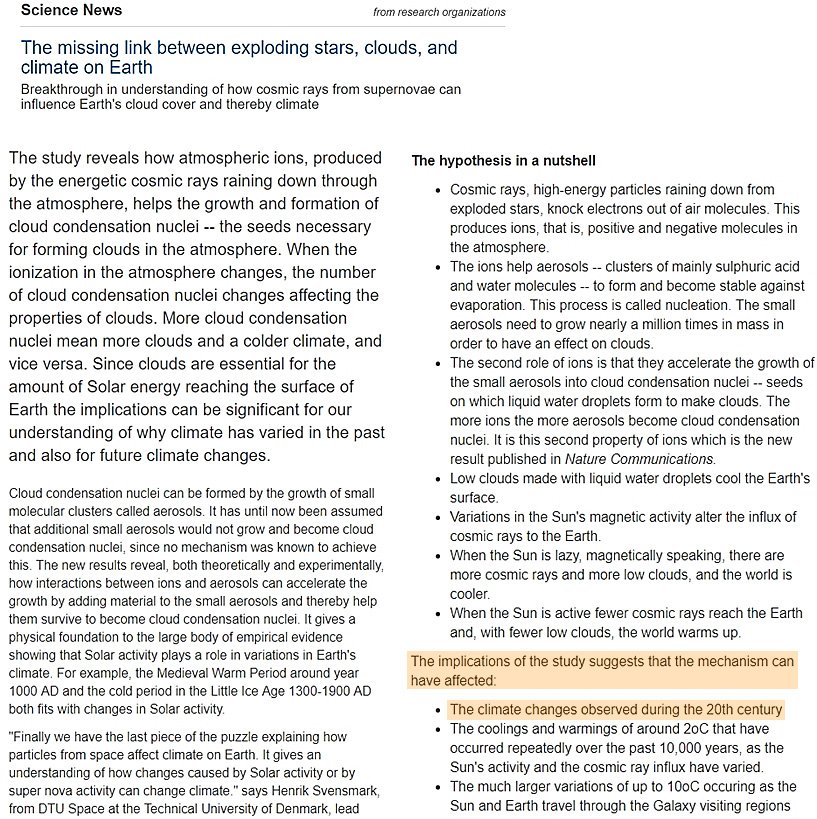 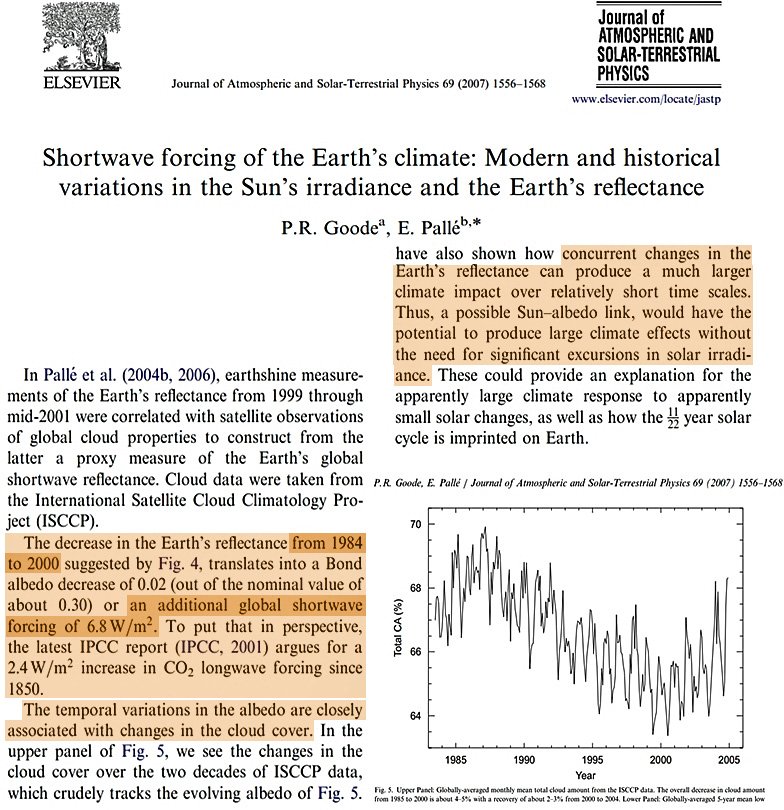 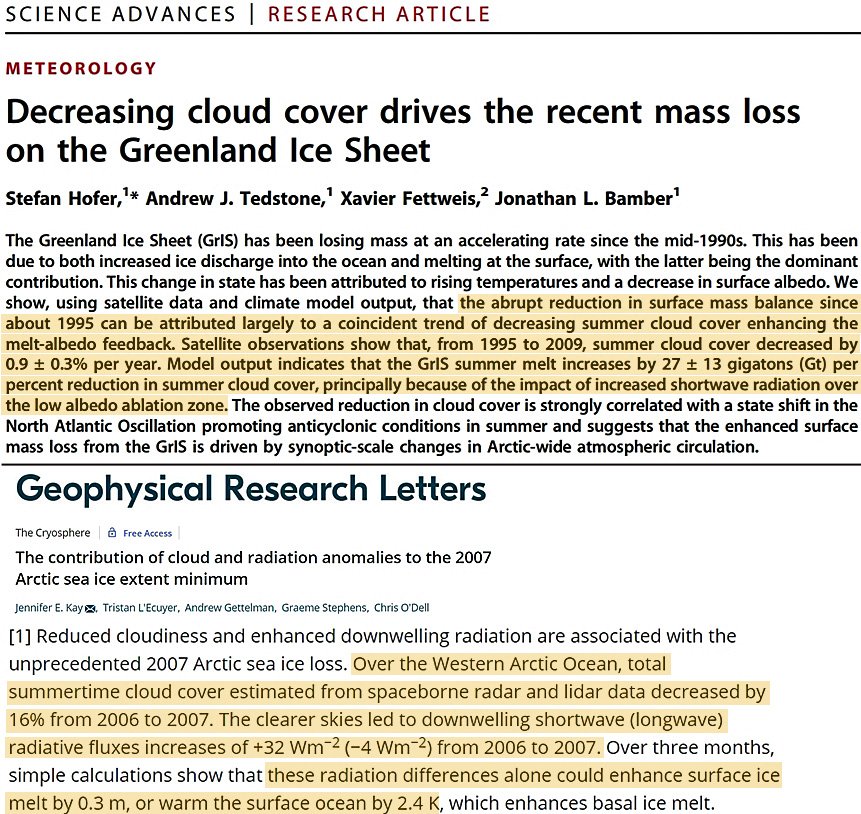