Schneefan at German skeptic site wobleibtdieerderwaermung here writes how renowned German news weekly DER SPIEGEL appears to have made up another story, this time involving a nonsensical climate alarm.

The embattled SPIEGEL this time selected a small area at the edge of the Arctic (Bering Sea/Bering Strait), which is usually not covered by more than half the ice anyway, and “drew completely absurd and inaccurate conclusions from it”.

We will recall how not long ago SPIEGEL sent out award-winning journalist Claas Relotius to do a story about rural America, who in turn made up everything so that it would fit a grotesque caricature of conservative America that snobby euro elites harbor.

Now it appears SPIEGEL has once ignored the real facts about the Arctic and instead made up a story to fit the alarmist global warming narrative. SPIEGEL wrote:

The Bering Strait is a narrow strait that separates Russia from Alaska. Normally it is covered with ice in spring – not so this spring, as images from the European Earth observation satellite “Sentinel 1” on 7 March show. The approximately 80 kilometres connecting the Pacific and Arctic Oceans are almost ice-free…
Indeed the spread of sea ice has reached a new record low this March, according to ESA.”

Yet, a review of the March 7, 2019, date that is cited in the SPIEGEL article shows that the Bering Strait was in fact completely covered with sea ice: 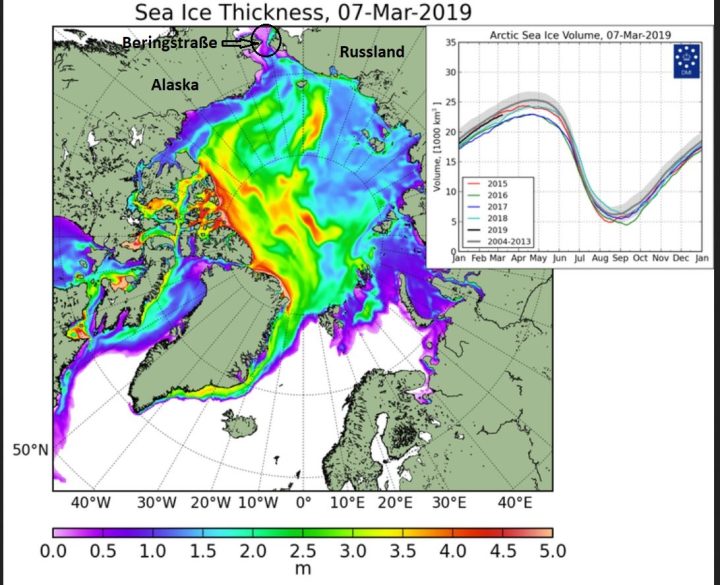 On March 7, 2019, the Bering Strait was completely covered with sea ice that was between 0.5 and 1.5 m thick. The SPIEGEL falsehood of an “almost ice-free Bering Strait” at the beginning of March 2019 has been exposed. Source: DMI Arctic Sea Ice Thickness and Volume

The “almost ice-free Bering Strait” is once again an invention of a SPIEGEL editor. The ice was also there back in February, too: 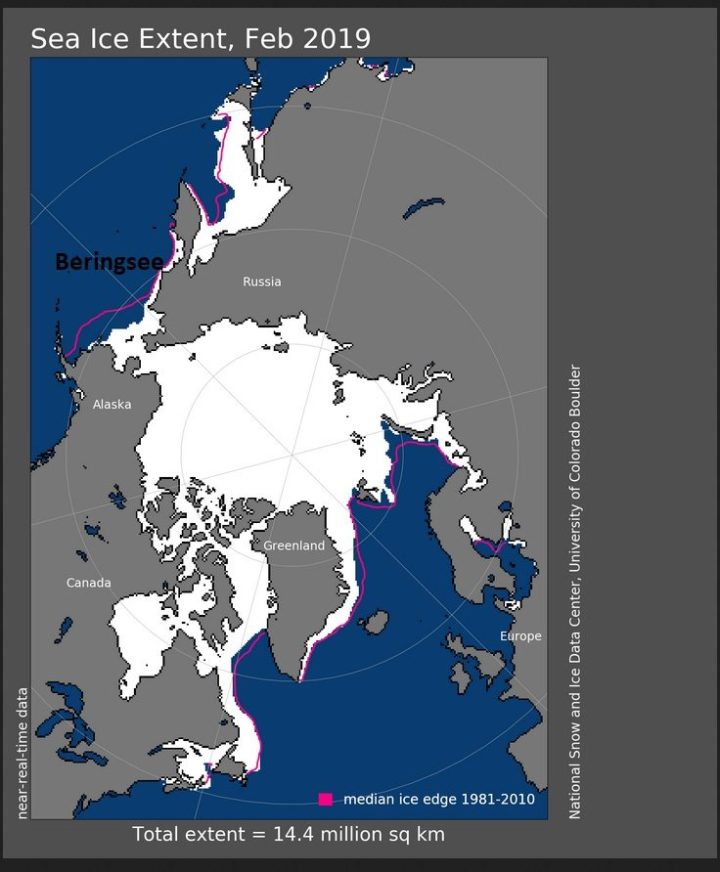 The NSIDC chart above shows the average extent of the sea ice areas (white) in the Arctic in February 2019. The pink lines show the extent of the sea ice areas in the globally accepted WMO climate average 1981-2010 since 2015. The Arctic “Bering Sea” (top left) was covered with ice in February 2019 about half of the average area. The assertion in the SPIEGEL article “The approximately 80 kilometers connecting the Pacific and the Arctic Oceans are almost ice-free” is false, as the Bering Strait (strait between Russia and Alaska) is completely covered with ice. Source: NSIDC Sea Ice Index

And nothing has changed as of March, 2019, as a look at sea ice thickness shows:

As in February 2019, the chart above shows that the Bering Strait is completely covered with sea ice between 0.5 and 1.5 m thick on March 20, 2019.  SPIEGEL lie of an “almost ice-free” Bering Strait at the beginning of March, 2019, has been exposed. Source: DMI Arctic Sea Ice Thickness and Volume

The Arctic sea ice VOLUME, i.e. the mass of sea ice, is also larger than in recent years and remains within the multi-year average (grey area): 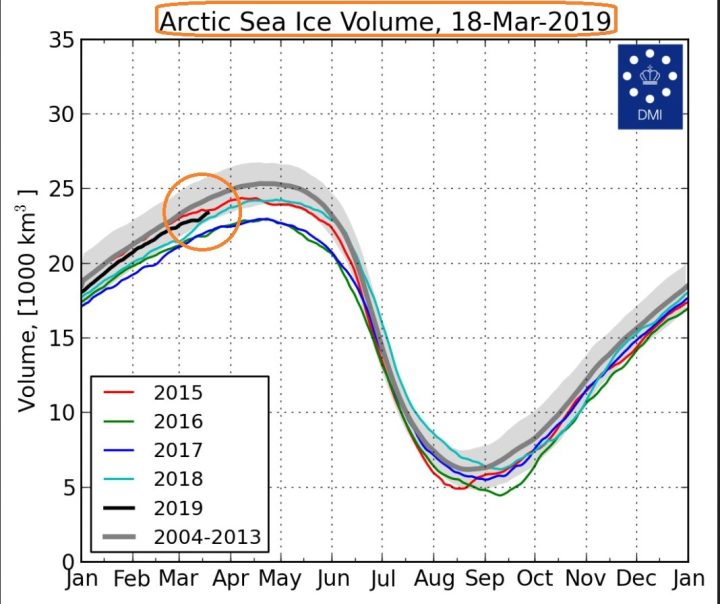 Schneefan concludes: “That is the measured reality, everything else is FAKE-NEWS (‘…false reports spread with manipulative intent’).”