Browse: Home / 2019 / May / 01 / Data From German Mountain Stations Show Winters Have Been Getting COLDER Over Past 30 Years!

Data From German Mountain Stations Show Winters Have Been Getting COLDER Over Past 30 Years!

The stations are located at Feldberg (1493 m) in southwest Germany, Brocken in northern Germany (1152 m), Fichtelberg in eastern Germany (1215 m) and Großer Arber in southeast Germany (1456 m). These 4 stations are sited well away from urban influences.

Aigner clearly highlights the strong variability of temperatures, which we see do not correlate at all with rising atmospheric CO2 concentrations.

The clearly oscillating trend seen at the four stations over the past decades likely have much more to do with the natural AMO and NAO ocean cycles, which directly impact Western Europe’s winter weather patterns.

Today as cool as 40 years ago!

The chart presented below shows the mean winter temperature of the 4 stations combined. The green curve is the 10-year smoothing. 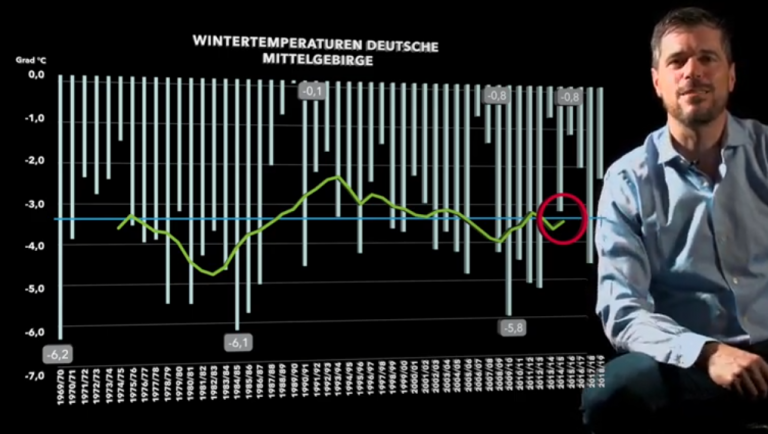 Today we see that Germany’s winter temperatures are just as cool as they were 40 years ago and that the linear trend showing a slight warming is “statistically insignificant”.

German mountains cooling over past 30 years

Aigner concludes that over the past 30 winters, the four mountains stations have shown a cooling of 0.8°C. The Feldberg station in the Black Forest has seen no winter trend at all over the past 50 years.

Aigner notes that climate change has not been impacting the German ski industry and that there has been “a growing gap between the public perception and the official data and that this needs to be investigated.

Aigner does remind, however, that Germany’s annual mean temperature indeed has been rising, but that the phenomenon is due to hotter summers that are correlated with considerably more sunshine hours.

Germany hasn’t warmed because of CO2, but because naturally changing weather patterns have led to more sunshine in a country that is otherwise known for its gray, dreary weather. Most Germans would welcome that change and see no catastrophe there.

5 responses to “Data From German Mountain Stations Show Winters Have Been Getting COLDER Over Past 30 Years!”