In January 2019, a paper by Andrzej Araźny et al appeared in the journal Theoretical and Applied Climatology, in which the researchers evaluated the weather data from four scientific expeditions to the Arctic Franz Josef Land. 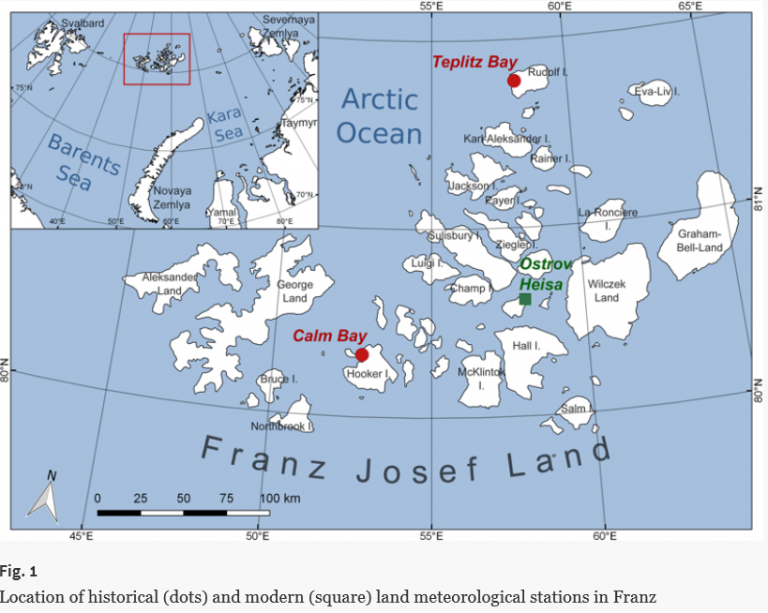 Chart Source: A comparison of bioclimatic conditions on Franz Josef Land (the Arctic) between the turn of the nineteenth to twentieth century and present day.

The Araźny team also came across an unusual heat that was registered during a trip in 1930/31 when it was 4.6 °C warmer than the modern average in 1981-2010. The authors explain that there have been two phases of warmth in the Arctic in the last 140 years. The first spanned from 1920-1938 and the second began in the 1980s or 90s. Both heat phases have a similar course, so that the proportion of natural versus anthropogenic climate drives is unclear.

Araźny and colleagues demand that climate models address this question more intensively in order to finally close the large gaps in understanding in the Arctic climate system – also with regard to attribution.

What follows is the abstract of the study, whose pdf can be downloaded free of charge:

The paper presents the variability of meteorological conditions: air temperature, wind speed and relative air humidity; and biometeorological indices: wind chill temperature, predicted clothing insulation and accepted level of physical activity on Franz Josef Land (in Teplitz Bay and Calm Bay) in the years 1899–1931. It employs meteorological measurements taken during four scientific expeditions to the study area. The analysis mainly covered the period October–April, for which the most complete data set is available. For that period of the year, which includes the part of the year with the Franz Josef Land’s coldest air temperatures, the range and nature of changes in meteorological and biometeorological conditions between historical periods and the modern period (1981–2010) were studied. The data analysis revealed that during the three oldest expeditions (which took place in the years 1899–1914), the biometeorological conditions in the study area were more harsh to humans than in the modern period (1981–2010) or similarly harsh. In contrast, during the 1930/1931 expedition, which represents the Early Twentieth Century Warming (ETCW), conditions were clearly more favourable (including predicted clothing insulation being 0.3 clo lower and 4.0 °C higher wind chill temperature than conditions observed nowadays).”

In the discussion the authors address in detail the Arctic warmth phenomenon of the 1930s:

In approximately the last 140 years, there have been two periods of significant temperature increases in the Arctic. The first began in around 1918–1920 and lasted until 1938 and has been called the ‘1930s warming’ (Bengtsson et al. 2004). Other works have referred to this period as the ‘Early Twentieth Century Warming’ (ETCW, Brönnimann 2009) or the ‘Early Twentieth Century Arctic Warming’ (ETCAW, Wegmann et al. 2017, 2018). Our results confirm the observations for the last expedition from the historical study period in 1930/1931. These years covered the warmest part of the ETCW (Table 3, Fig. 4). In turn, the second increased warming of the Arctic began around 1980 (Johannessen et al. 2004) or according to Przybylak (2007) in about the mid-1990s. Changes in overall atmospheric circulation have long been believed to have been the cause of the ETCW (e.g. Scherhag 1937). As the modern climate warming (since 1975) has progressed in a largely similar manner to the progression of the ETCW (Wood and Overland 2010; Semenov and Latif 2012), there has been renewed interest in the insufficiently well-explained causes of the ETCW using the latest research methods, including, primarily, climate models. An analysis of the literature shows that the cause of such a significant warming in the present period is still not clear. There is even controversy over whether the main factors in the process are natural or anthropogenic, although the decided majority of researchers assign a greater role to natural factors (Bengtsson et al. 2004; Semenov and Latif 2012). It would appear that the greatest differences of opinion on the causes of the ETCW are to be found in works presenting climate models (see, e.g. Shiogama et al. 2006; Suo et al. 2013), which is an excellent illustration of the still insufficient knowledge of the mechanisms governing the Arctic Climate System.”

In the conclusion, the authors compare the warmth of the 1930s to today’s values: