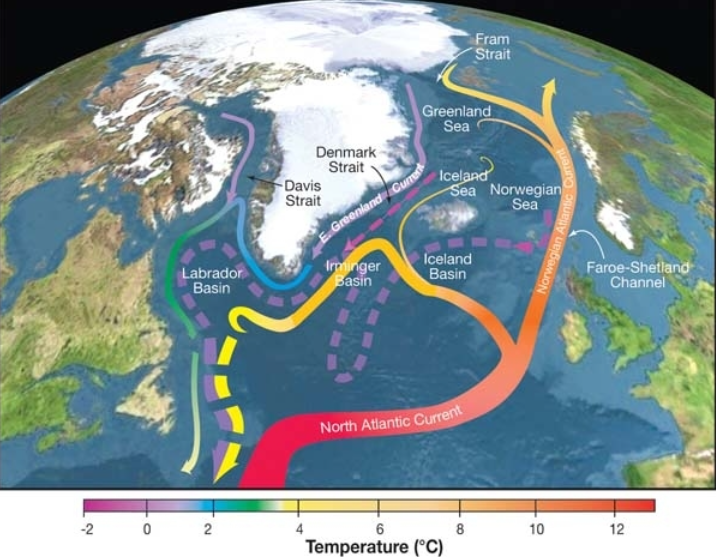 Stefan Rahmstorf never tires of claiming the Gulf Stream system (AMOC, Atlantic Meridional Overturning Circulation) is being strongly weakened by the fresh water input of the melting Greenland ice. In his Klimalounge blog at the end of January 2019 he wrote:

Yet, on April 26, 2019, Dukhovskoy et al published a new paper in the JGR Oceans, which concludes that Greenland’s meltwater is having little impact on the AMOC:

In the main text, it is stated:

“This result agrees with the previous study of Saenko et al. (2017), who also show that the GFWA of similar magnitude (and even double of this magnitude) has negligibly small impact on the SPNA thermohaline fields, barely impacting AMOC.”

GFWA means the meltwater anomaly from Greenland and SPNA of subpolar North Atlantic. A study from 2017 finds something similar, which of course does not get mentioned by Rahmstorf in January, 2019. The fresh water from Greenland is mixed down to depths of 1000 m and thus the amount is practically meaningless for the AMOC, the paper finds.

For years we have been hearing from certain circles of climate research that we are melting the Greenland ice sheet and thus a “Day After Tomorrow” scenario gets conjured up. But a very recent paper finds that this is not the case. And when we report on it, are we thereby questioning the “credibility of climate science”, or are we correctly reflecting the progress made in climate research because the work is getting cited? Climate alarmists are desperately trying to convey the wrong image of a monolithic “climate science”, which in reality does not exist at all.