Well, maybe we aren’t all going to die in 11 1/2 years, like some surrounding Australia’s Labour Party were insisting before the recent elections.

A new study appearing in the Journal of Weather and Climate Extremes titled “Historical extreme rainfall events in southeastern Australia” – led by Linden Ashcroft, School of Earth Sciences, University of Melbourne – shows that even more extreme weather in terms of rainfall existed before 1900 in Melbourne, Sydney and Adelaide. 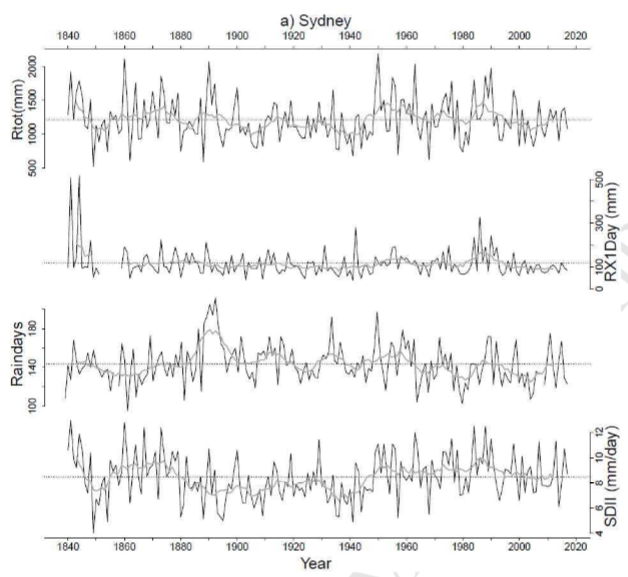 Moreover, the authors found a “moderate and relatively stable relationship between El Niño–Southern Oscillation (ENSO) and annual variations of total rainfall and the number of raindays.”

What follows is the paper’s abstract (my emphasis):

The cities of Melbourne, Sydney and Adelaide are home to almost half of the Australian population, and are often exposed to extreme rainfall events and high year-to-year rainfall variability. However the majority of studies into rainfall in these cities, and southeastern Australia in general, are limited to the 20th century due to data availability. In this study we use rainfall data from a range of sources to examine four rainfall indices for Melbourne, Sydney and Adelaide for 1839–2017. We derive the total rainfall, number of raindays, wettest day of the month and the simple daily intensity index for each city over the past 178 years, and find relatively consistent relationships between all indices despite potential data quality issues associated with the historical data. We identify several extreme daily rainfall events in the pre-1900 period in Sydney and Melbourne that warrant further examination as they appear to be more extreme than anything in the modern record. We find a moderate and relatively stable relationship between El Niño–Southern Oscillation (ENSO) and annual variations of total rainfall and the number of raindays at all three cities over the research period, but no relationship between ENSO and the annual wettest day, in agreement with other studies using shorter time series.”

Note how the authors mention how “extreme daily rainfall events in the pre-1900 period” in Sydney and Melbourne “appear to be more extreme than anything in the modern record.”

So despite the constant claims of worsening weather globally, objective analyses of longer term data consistently show that weather in terms of hurricanes, tornadoes, extreme precipitation, etc. were just as bad or even worse in the preindustrial times. It’s natural, stupid.

All the pagan-minded rain-dancing, socialism and wealth destruction and redistribution isn’t going to change our weather.