Browse: Home / 2019 / May / 22 / Potsdam Institute Caught Up In Contradiction: Says North Atlantic Cooling, Yet Blames May Snow On Warming!

Early May saw a surprise heavy snowfall across parts of central Europe and near record levels for that particular time of year up in the Alps. Such events do little to bolster public confidence in the claim the globe is warming.

So leave it to the ultra-alarmist Potsdam Institute for Climate Impact Research (PIK) to concoct an explanation for the media: All the cold and snow are in fact the result of global warming!

How the PIK did this gets described by Michael Krüger at Science Skeptical here in an article titled: “The Potsdam Institute for Climate Impact Research (PIK) does not rule out a connection between the current snow masses in the Alps and climate change!”

Climate change leading to May snow!

“The atmosphere has become warmer, and thus more moisture,” PIK climate scientist Peter Hoffmann explained to the German DPA press agency. “We are having a massive north inflow crossing the North Sea, which still has relatively mild temperatures for the season – there is the potential for humidity. This wind current is running exactly into the low mountain ranges and the Alps.”

Hoffmann added: “We saw 2018 as the warmest year since the beginning of weather records and we had nine months since last April which were above average warm. That made the oceans warmer than normal. If the air mass flow changes as a result of the climate and there are more frequent north-south weather conditions, which intensifies the mountain effect.”

First, Krüger points out that 2018 in Germany was one of the driest and warmest recorded, yet last year the atmosphere did not “take in more moisture”.

And the North Atlantic also was not warm, as implied by Hoffmann – not at all as the following NASA chart shows: 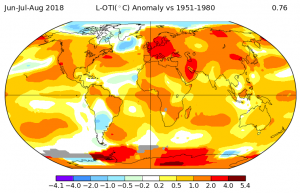 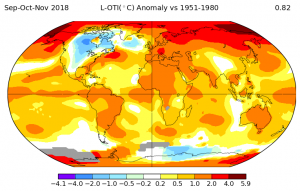 Both during the summer and fall the North Atlantic – which vastly impacts Europe’s weather – were cool. 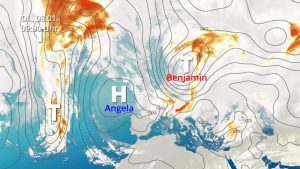 Responsible for the May snowfall across Europe was not climate change, Krüger shows, but rather weather patterns that are consistent to Europe’s traditionally known climate.

As the above chart shows, a low positioned north of Poland and a high off the coast of France provided the blast of polar air which swept up moisture from the North Sea and led to snow precipitation across a large swath of Europe.

Krüger summarizes: “Global warming therefore has little to do with all this. Especially since climate impact researcher Stefan Rahmstorf of the PIK repeatedly points to a weakening “Gulf Stream” and a cooling across the North Atlantic off Greenland. The North Atlantic, i.e. our weather brewer, has not warmed in recent decades, but rather has cooled down and continues to cool down in Stefan Rahmstorf’s climate projections.”

Bottom line: The PIK’s Rahmstorf contradicts the claims made by the PIK’s Hoffmann. 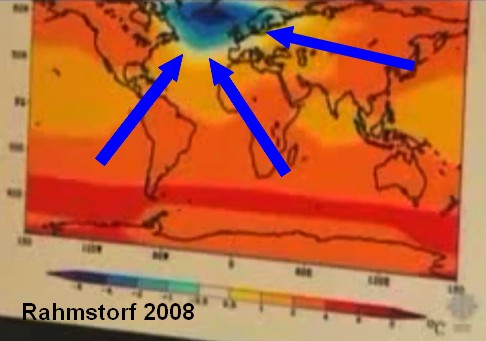 Cold air can absorb less moisture, so there should be less rainfall in our region, which is caused by the lows over the cold North Atlantic in autumn and winter. The PIK has once again made a complete 180°U-turn. First the PIK says that the North Atlantic has cooled down and will continue to cool down and this is connected with a weakening “Gulf Stream” – due to climate change of course. But now we are being told that the ocean is getting warmer, even in our North Atlantic weather brewer and so the warmed air can absorb more moisture and bring more precipitation and snow with it. Of course, this too is also a consequence of climate change.”

6 responses to “Potsdam Institute Caught Up In Contradiction: Says North Atlantic Cooling, Yet Blames May Snow On Warming!”