Again today we are seeing earlier sensational, hysterical alarmist predictions made by “climate scientists” falling to pieces before our eyes.

Recall how back in 2012 parts of the USA were seeing drought conditions and so the climate alarmists declared the US climate was entering a “permanent drought” – due to man’s use of fossil fuels. The only hope, they claimed, was that we radically transform our free-market based system into an (experimental) authoritarian, eco-socialist society with diminished property rights and severely rationed energy. Major policy decisions would then be done by “science experts” sitting on a “Future Committee” and not by masses of ignorant voters.

Thankfully that nutty transformation yet to be implemented (so far). And guess what? The US hasn’t turned into a permanent barren desert with everyone being sorry for not having listened.

At Twitter, Dr. Roger Pielke Jr. just tweeted how currently the US is in fact the wettest it’s been so far this century, with 91% of the country not being in a drought!

Good news!
This week 91.16% of the US is experiencing no drought conditions, a record.
This is the least drought since Drought Monitor data starts in Jan 2000.
Even better?
Since 2000 area of US not in drought has increased from ~50% to about 60%.
data: https://t.co/JTUgHOPpll pic.twitter.com/0uPDgLlvcr

What an embarrassment this has got to be for the alarmist climate scientists.

And on yesterday’s Weatherbell Daily Update, 40-year veteran meteorologist Joe Bastardi also commented on the 2012 “permanent drought” predictions and the claims the US was at the dawn of a new Dust Bowl, saying that he considered “this as big a fiasco as saying the Arctic was gonna be ice-free or we weren’t gonna see snow any more.”

Opposite of the dire predictions

The climate scientists warned that oncoming permanent drought would severely impact food production, lead to shortages and as a result there would by an increased risk of social unrest, misery and falling skies.

But here, too, Joe Bastardi shows these warnings have turned out to be high-grade crackpot predictions. Here’s what has really happened in terms of food production in the USA since 2012 and beyond: 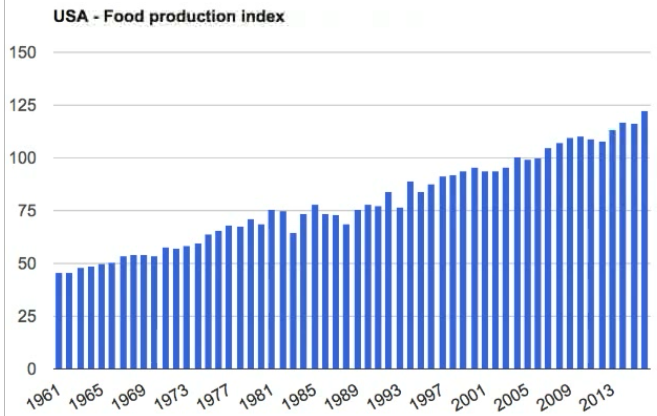 In his Daily Update, Joe also showed how drought conditions in fact were worse in the 1950s and 1930s than they were in 2012. As the chart above shows, US food production has climbed more than 10% since the false and dire warnings made 7 years ago.

8 responses to “US Now Wettest In 2 Decades! Meteorologist Bastardi: 2012 “Permanent Drought” Predictions “As Big A Fiasco” As Ice-Free Arctic Prediction”