Two European professors recently wrote that the IPCC projections of future warming are based on huge unknowns, and do not take the past properly into account.

This means that projections of the future of the world’s climate are unreliable, according to Samuel Furfari, Professor at the Free University of Brussels,
and Henri Masson, Professor (Emeritus), University of Antwerpen.

According to the two professors, the GISS Surface Temperature Analysis (GISTEMP v4) is an estimate of global surface temperature change (one that is often used by climate scientists for their reports to the media). 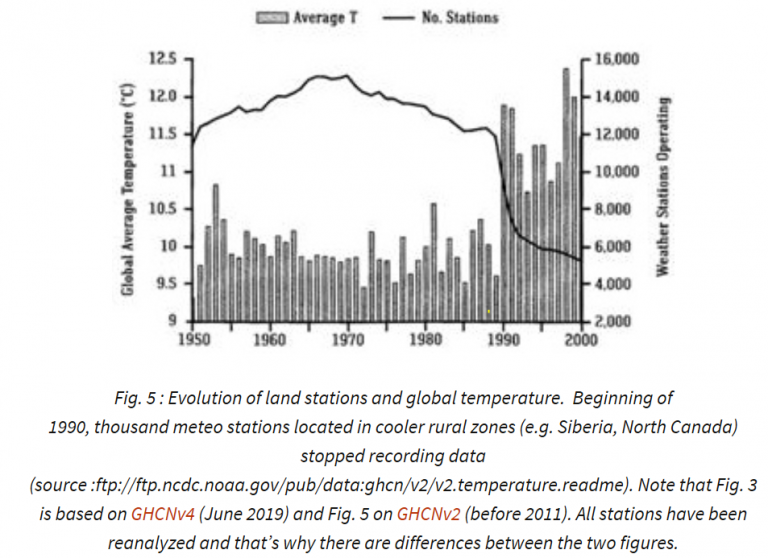 This estimate is computed using data files from NOAA GHCN v4 (meteorological stations), and ERSST v5 (ocean areas). In June 2019, the number of terrestrial stations was 8781 in the GHCNv4 unadjusted dataset; but in June 1880, that figure was a mere 281 stations, the two professors write.

Professors Furfari and Masson write: “The climate system, and the way IPCC represents it, is highly sensitive to tiny changes in the value of parameters or initial conditions and these must be known with high accuracy. But this is not the case.”

In other words, the IPCC method is fraught with great uncertainties and much guesswork.

“This puts serious doubt on whatever conclusion that could be drawn from model projections,” the two professors write.

Masson and Furfari say that IPCC scientists ignore that climate change occurs with cyclic behavior and that linear trend lines applied to (poly-)cyclic data of period similar to the length of the time window considered, open the door to any kind of fake conclusions, if not manipulations aimed to push one political agenda or another.

Other factors also cast doubt over the reliability of climate models, among them the lack of data on sea surface temperatures (SSTs). The oceans represent about 70% of the Earth surface. “Until very recently, these temperatures have been only scarcely reported, as the data for SST (Sea Surface Temperature) came from vessels following a limited number of commercial routes,” report Masson and Furfari.

Such gaping data holes make it impossible to correctly calibrate models, and so that they are able to project the future climate. Scientists in many cases are simply free to guess whatever they want.

Dr. Samuel Furfari is a recognized authority on energy policy based in Brussels. Between 1982 to 2018, he was a senior official on energy policy in the European Commission. For 15 years he is a professor of energy geopolitics and energy politics at the Free University of Brussels. He is the president of European Society of Engineers and Industrialists.