Amazing: A proxy study of Laos finds natural variability in hydrometeorology, a little Ice Age, and other substantial climate changes in the pre-greenhouse gas era.

Who would have thought! (sarcasm) 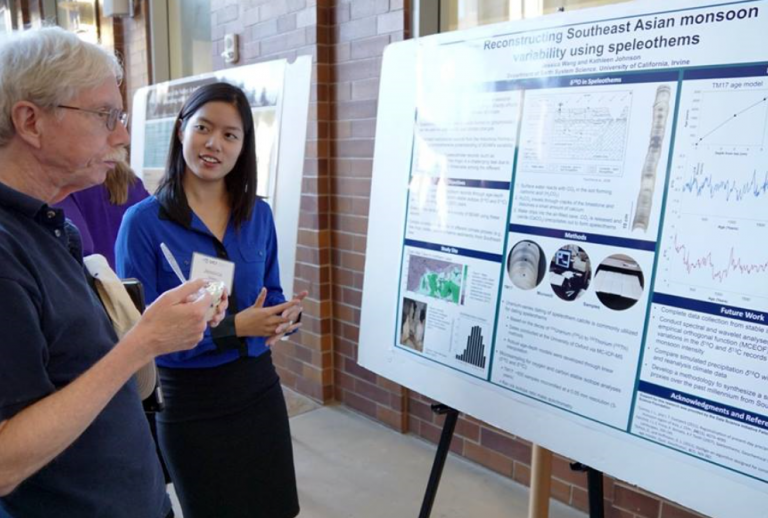 University of California Irvine researcher Jessica Wang and her team of researchers find plenty of natural climate variability in Southeast Asia over the past 2000 years and a positive correlation with solar activity. Photo credit: Jessica K. Wang.

In a recently published paper published by a team lead by Jessica Wang of the Department of Earth System Science, University of California Irvine titled: “Hydroclimatic variability in Southeast Asia over the past two millennia,” in the journal of Earth and Planetary Science Letters, Wang et al found good evidence of a positive correlation with solar activity since 1200 CE, “contrary to the findings in previous studies”.

Wang is developing high-resolution and precisely dated stalagmite stable isotope records (of C and O) to evaluate past hydroclimate variability. She and her team of researchers compare the new records with regional tree-ring records and stalagmite records from the broader Asian monsoon region to better understand regional hydroclimate dynamics.

The researchers use global climate model simulations to better understand the role external forcings (i.e., solar activity) have on precipitation variability over the last two millennia.

The spatiotemporal variability of the Asian Monsoon (AM) over the last two millennia has been attributed to a combination of external solar and volcanic forcing and/or internal coupled atmosphere-ocean dynamics, but the relative importance of these mechanisms remains unresolved. The present knowledge of multidecadal to centennial-scale AM variability over Mainland Southeast Asia is not well-constrained, despite substantial progress in understanding seasonal to decadal variability from tree ring records. Here we present the first high-resolution stable isotope (δ13C and δ18O) speleothem record from northern Laos spanning the Common Era (∼50 BCE to 1880 CE). The δ13C record reveals substantial centennial-scale fluctuations primarily driven by local water balance. Notably, the driest period at our site occurred from ∼1280 to 1430 CE, during the time of the Angkor droughts, supporting previous findings that this megadrought likely impacted much of Mainland Southeast Asia. In contrast, variations in stalagmite δ18O reflect changes in rainfall upstream from our study site. Interestingly, the δ18O record exhibits a positive correlation with solar activity that persists after 1200 CE, contrary to the findings in previous studies. Solar-forced climate model simulations reveal that these δ18O variations may be driven by solar-forced changes in upstream rainout over the tropical Indian Ocean, which modify the δ18O of moisture transported to our study site without necessarily affecting local rainfall amount. We conclude that future rainfall changes in Mainland Southeast Asia are likely to be superimposed on multidecadal to centennial-scale variations in background climate driven primarily by internal climate variability, whereas solar forcing may impact upstream rainout over the Indian Ocean.”

Yet another paper showing that climate variability was common over the past 2000 years without added CO2 from man.

Confirmed by 100s of studies

Alarmists may wish to dismiss these findings, but Wang’s results are in line with those of hundreds of other studies.