Recently Japanese scientist Dr. Kiyohiko Ikeda (@IkedaKiyohiko) retweeted about a newspaper book review appearing in the Sankei Shinbum, which reported on how Marc Morano’s best selling “The Politically Incorrect Guide To Climate Change” was hitting the book market in Japan.

Mr. Morano’s Politically Incorrect Guide book had been recently released in the Japanese version, translated from the English by Tadashi Watanabe, Professor Emeritus of Chemistry of the University of Tokyo and Professor of Tokyo University of Science Graduate School.

The Sankei Shimbun book review, authored by Shohei Nagatsuji, explains how this summer an event occurred and challenges the foundation on which the existing IPCC bases its CO2 global warming theory, but which went unreported in Japan. This August, the reliability of Dr. Michael Mann’s hockey stick graph was rocked after he had lost a defamation case against a Canadian researcher [Dr. Tim Ball], who had sharply criticized the hockey stick graph.

“Hundreds of factors” behind climate change

The Sankei Shimbun also reports how Mr. Marc Morano’s book -「地球温暖化」の不都合な真実』- presents the criticisms of Prof. Mann and the inside workings of IPCC.

The Japanese daily explains how Morano’s book cites scientists who say “temperature is mainly determined by water vapor and clouds, so even if CO2 is doubled or tripled, the situation would be almost the same” and that there are in fact “hundreds of factors contributing to climate change.” 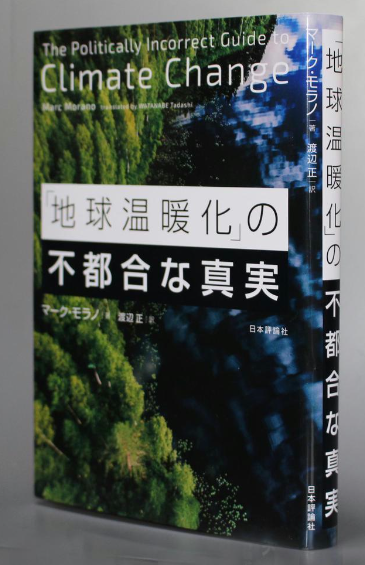 All focus on CO2 is “misplaced”

The Japanese daily also says Mr. Morano’s book shows how scientists from the UK and New Zealand saying that putting all the focus on CO2 is ” misplaced”.

“…amazed at each chapter”

According to the Sankei Shimbun:

We recommend you take this book because it is easy to read. You’ll be amazed at each chapter. It is full of scientific controversies and scandals over global warming that are not well understood in Japan.”

The Sankei Shimbun concludes that Mr. Morano’s book provides “an overall picture of the global warming issue” and that it is an issue which “can be viewed from multiple perspectives.”

Overall it’s a very positive, welcome review for Marc Morano’s “The Politically Incorrect Guide to Climate Change” here in Japan. Recently Morano’s book has climbed near the top of the charts for books under Environment.