For those wondering how Greta Thunberg managed to get so off the rails  look no further than her climate advisors. They are among the most alarmist worldwide.

According to the online, German-language Merkur.de here, citing Swedish daily Expressen, 16-year old climate activist is advised by Professor Stefan Rahmstorf, among others, of the Potsdam Institute for Climate Impact Research (PIK) in Germany.

Professor Rahmstorf and the Potsdam Institute are well known among the climate science community for their highly alarmist projections and off-the-mark science. For example, the PIK’s former director, Prof. Hans-Joachim Schellnhuber, once preposterously claimed the Himalayan glaciers would disappear by 2030 and the world would explode with 9 billion people on it.

Alarmism as a business model

According to the Merkur, the PIK has “created a business model with climate change”, adding: “It advises state institutions and municipalities on how they can protect themselves against the severe climate changes predicted by PIK.”

The Merkur reports how Greta and Professor Rahmstorf “have met on several occasions” and how the 16-year old “calls the professor for advice.” Rahmstorf praises the teenager, saying “she knows a lot about climate science” and argues that politicians too should adopt Greta’s doomsday visions. 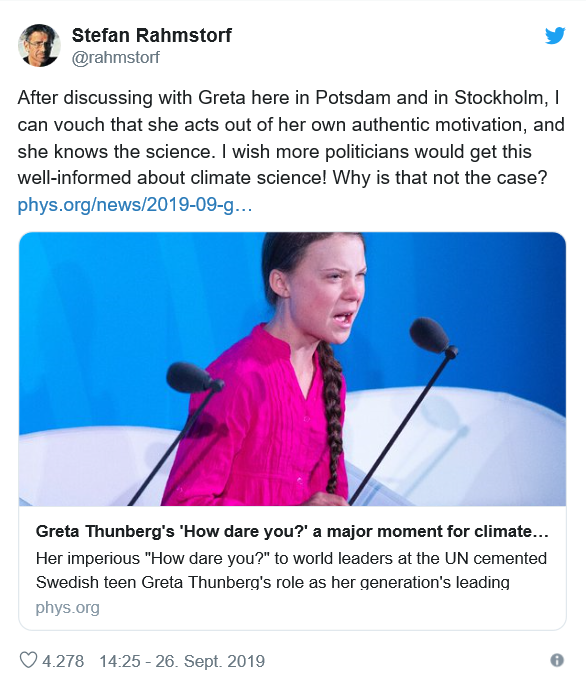 But now some are speaking up against the excessive alarmism.

Not only are some media questioning Rahmstorf’s alarmist climate science, though it makes for good headlines, but so are other experts, such as renowned geologist Stefan Kröpelin, or Prof. Fritz Vahrenholt, or veteran meteorologist Jörg Kachelmann.

The two heavyweights recently even argued on Twitter about whether a piece of broken glass could trigger a forest fire, as Rahmstorf claims, or not. The sharp-witted, media-savvy Kachelmann recently characterized claims made by Rahmstorf as “potsdaft” – an allusion to his place of work –  and labelled him a Klimaheuler, a ‘climate howler’.

Greta Thunberg’s other advisors include Swedish Professor Johan Rockström (53) and British Professor Kevin Anderson (57), both devout alarmists. Non-alarmist climate experts and rational voices are not welcome by Thunberg and her advisors. Why ruin a good business model?