Even NASA says it:

Without the Earth’s greenhouse gases (GHG) in the atmosphere, the planet would be on average a frigid -18°C.

But because of the preindustrial 280 ppmv CO2 and other GHGs in our atmosphere, the average temperature of the Earth thankfully moves up by 33°C to +15°C (see chart below), based on the Stefan Boltzmann Law. 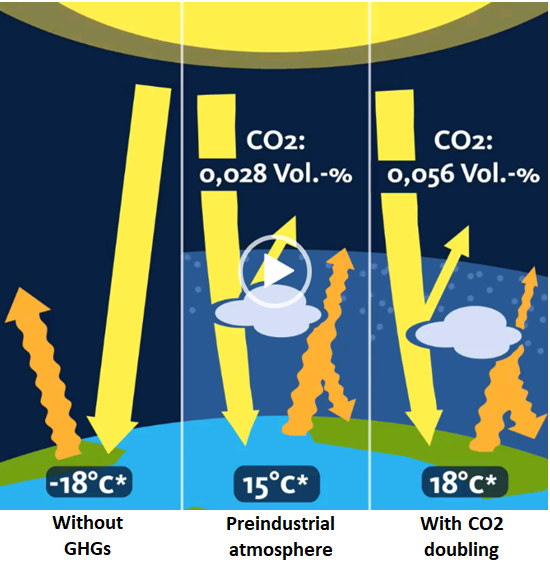 Global warming theorists say the Earth’s surface preindustrial temperature was supposed to be 15°C. And today CO2 is supposed to have warmed it another degree, to 16°C. Image: www.klimamanifest.ch.

And because CO2 has since risen to about 410 ppmv today, the global temperature supposedly should now be about another 1°C warmer (assuming positive feedbacks) bringing the average earth’s temperature to 16°C.

And once the preindustrial level of CO2 gets doubled to 560 ppm, later near the end of this century, global warming alarmists insist the Earth’s temperature will be near 18°C, see chart above.

Answer: astonishingly the official institutes tell us it is only 14.7°C!

For example, data from the World Meteorological Organization (WMO) shows us the global absolute temperatures for the previous 5 years:

As the image above shows, the global absolute temperature last year was just 14.68°C.

So why are we missing over 1.3°C of heat? Why is there this huge discrepancy between scientists?

In 2003, renowned German climate scientist Prof. Mojib Latif also confirmed in his book that 15°C was the “optimum temperature” for the Earth.

And in his 2003 doctorate dissertation, Tim Staeger wrote that the natural Earth’s temperature without man-made impacts is “about 15°C”.

In fact, practically all German textbooks used at schools today say that the “natural temperature” of the Earth due to the greenhouse effects of the atmosphere is a “life-friendly average of 15°C” instead of -18°C.

Moreover, Potsdam institute for Climate Impact Research (PIK) scientist Anders Levermann testified before the German Parliament last year, and confirmed that the global mean temperature of the Earth back in 1850 was 15°C, which means today it is supposed to be well over 16°C. So why is the WMO telling us it’s only 14.68°C and others like the PIK and NASA saying it’s about 16°C?

This massive discrepancy needs to be explained.

The IPCC indeed contradicts all the scientists and media who claim the global average temperature was 15°C back in 1850. Here’s the IPCC chart from the 2007 report: 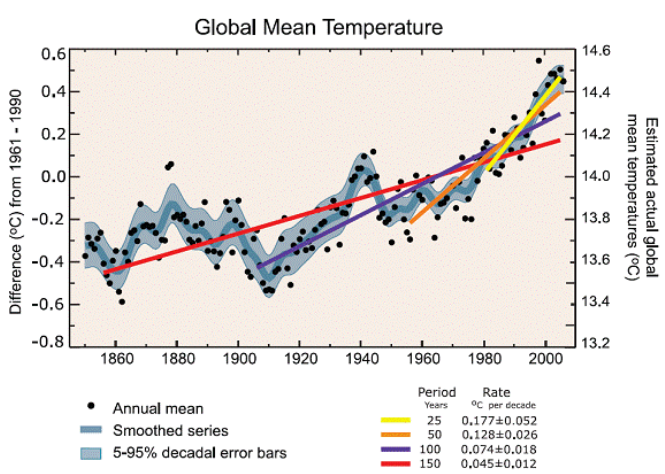 As the chart above shows, the IPCC stated that the global mean temperature in 1850 was a relatively frigid 13.7°C – i.e. well below the “life-friendly” average of 15°C.

Today we are still below the 15°C, and so how can it be too hot?

There’s no doubt it’s gotten warmer since 1850, the peak of the Little Ice Age. But it’s clear nobody knows what the globe’s real average temperature is. Figures are being wildly tossed around. If we are to believe the IPCC’s 14.7°C figure, then we are still too cool and there is absolutely no warming crisis.