As reported in 4 separately-published papers, scientists have discovered a mechanism whereby islands can build themselves up naturally, thwarting the threat of sea level rise.  Tuck et al. (2019) affirm the “implications of island building are profound, as it will offset existing scenarios of dramatic increases in island flooding.” 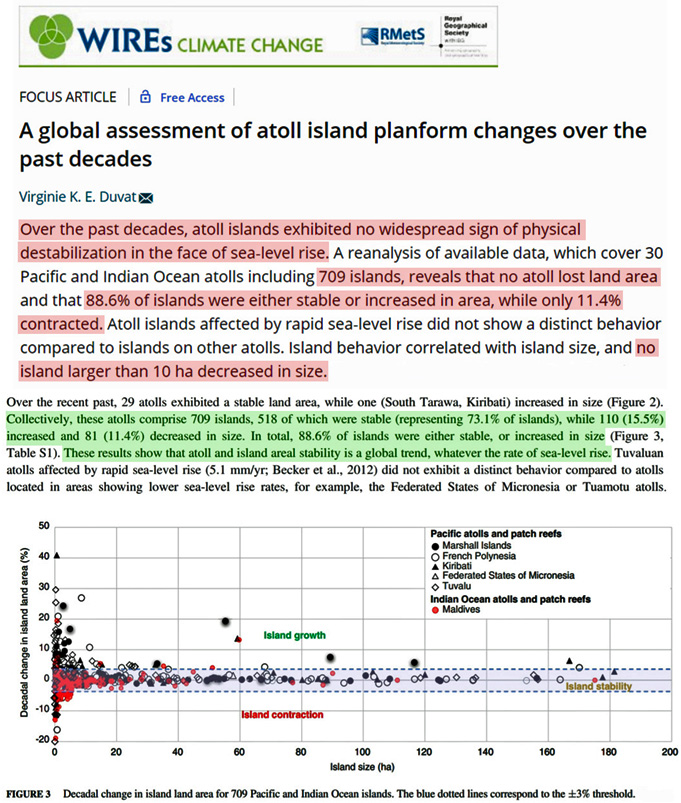 In four other new papers, 3 of them with Auckland University Ph.D candidate Megan E. Tuck as lead author, scientists have discovered a mechanism whereby islands have the capacity to “morphodynamically respond to rising sea level” via wave-driven “overwash processes”.

The implications are profound. The most concerning impacts of sea level rise may effectively be thwarted by natural processes and consequently “many islands are less vulnerable to inundation than currently perceived.”

Positive developments in marine science like this are indeed worth reporting in 4 papers and 3 separate scholarly journals within the same calendar year.

This good news also deserves much more coverage than the public is likely to see.

“Here, we present evidence from physical model experiments of a reef island that demonstrates islands have the capability to morphodynamically respond to rising sea level through island accretion. Challenging outputs from existing models based on the assumption that islands are geomorphologically inert, results demonstrate that islands not only move laterally on reef platforms, but overwash processes provide a mechanism to build and maintain the freeboard of islands above sea level. Implications of island building are profound, as it will offset existing scenarios of dramatic increases in island flooding. Future predictive models must include the morphodynamic behavior of islands to better resolve flood impacts and future island vulnerability.”

“Coral reef islands are unconsolidated deposits of reef-derived sand and gravel that are considered vulnerable to the impacts of global sea-level rise because of their low elevation (< 3 m) and exposure oceanic wave energy. Previous research has shown that sea-level rise will drive an increase in wave overtopping on reef island shorelines, which will be an increasing hazard for atoll island communities. Here, we show that wave overtopping on reef islands is a geomorphically important process that facilitates sediment deposition on the island surface and vertical building. Field evidence from 26 overwash deposits show that vertical island accretion can be driven by king tides, long-period swell, local storms, tropical cyclones and tsunami. Deposit depths ranged between 0.06–1.93 m and increased island elevations by between 4–400%. Recognition that overwash processes can contribute to vertical island building is instructive in considering the potential for islands to adjust to future increases in sea-level and to incorporate this critical morphodynamic response in future flood risk modelling for low islands.”

“[R]esults show that the rate and magnitude of physical adjustment is strongly dependent on the rate and magnitude of sea-level rise and wave conditions. Results challenge existing models of future island susceptibility to wave driven flooding, demonstrating that washover processes can provide a mechanism to build and potentially maintain island freeboard above sea level. These insights highlight an urgent need to incorporate island morphodynamics into flood risk models in order to produce accurate assessments of future wave-driven flood risks and better resolve island vulnerability.”

“Low-lying coral reef islands are considered extremely vulnerable to the impacts of climate change. However, future island morphodynamic adjustments in response to anticipated sea level rise and changing wave conditions are currently poorly resolved. Assertions of island vulnerability are based on outputs from flood risk models that simulate sea level rise on present day island topography despite evidence that many reef islands are highly dynamic landforms. Utilizing a physical modelling methodology, three experiment programs were undertaken to model gravel island morphodynamics in response to increasing sea level and changing wave conditions. Modelling outputs present new insights into the modes and styles of island change, primarily the first experimental evidence that reef islands can keep pace with sea level rise through island building driven by washover processes. Results suggest that many islands are less vulnerable to inundation than currently perceived and may endure on reef platforms despite sea level rise.”

6 responses to “4 New Papers, One Alarm-Dispelling Conclusion: Future Sea Level Rise May NOT Threaten Islands After All”