International and NASA solar scientists find their Total Solar Irradiance reconstruction extending to 1700 can “correlate well” with Earth’s global temperature records, including a positive net TSI trend during 1986-2008. A new Grand Solar Minimum is expected to commence during the 2030s.

Surface climate records that have been uncorrupted by coastal (ocean-air)/urbanization biases suggest there has been a long-term oscillation in temperature since 1900, with peaks during the 1920s-1940s and again during recent decades (Lansner and Pepke Pedersen, 2018). 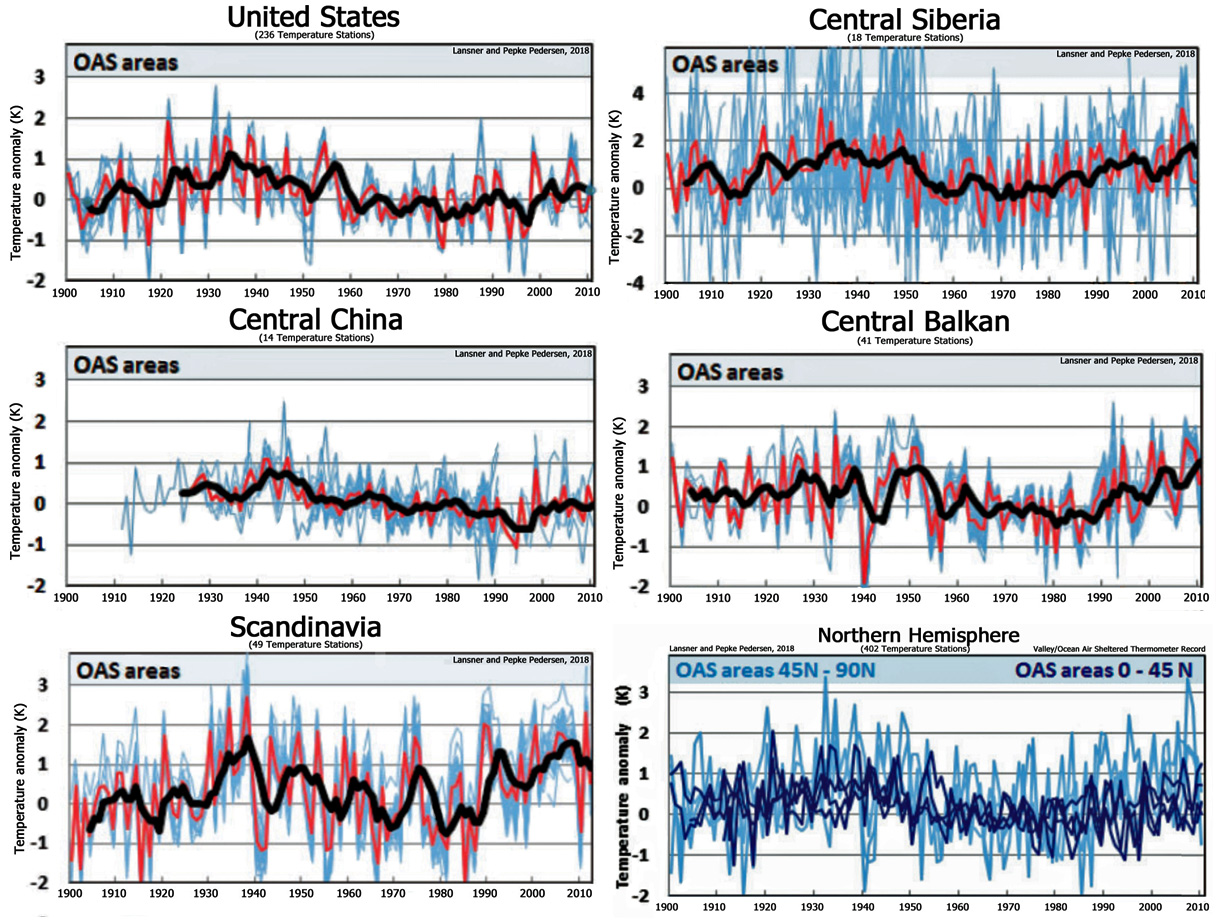 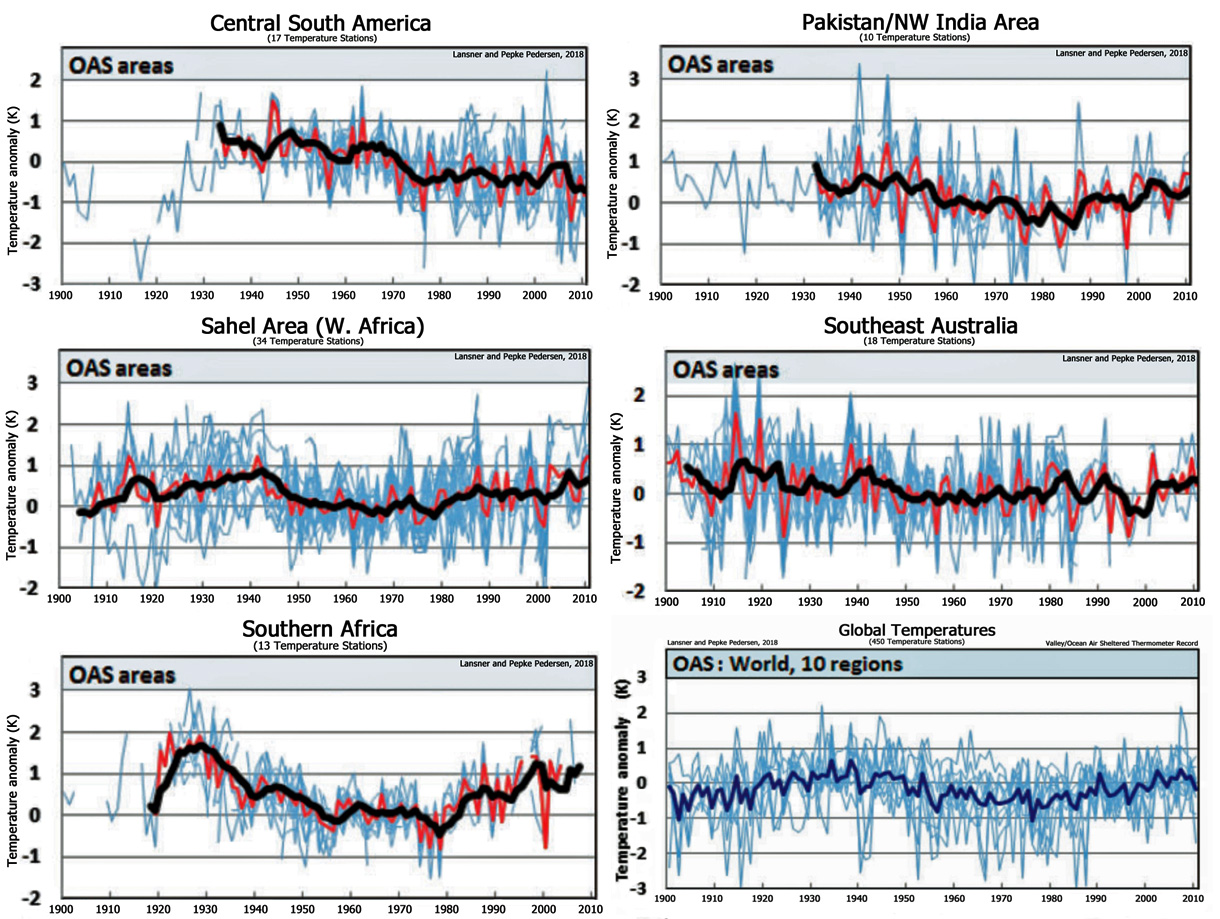 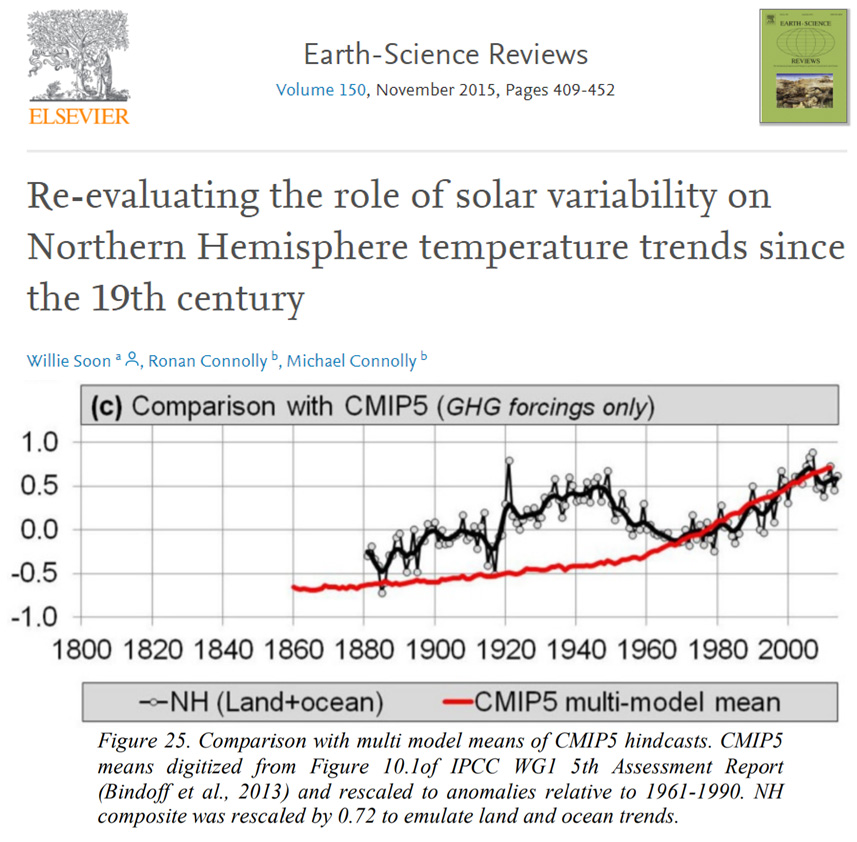 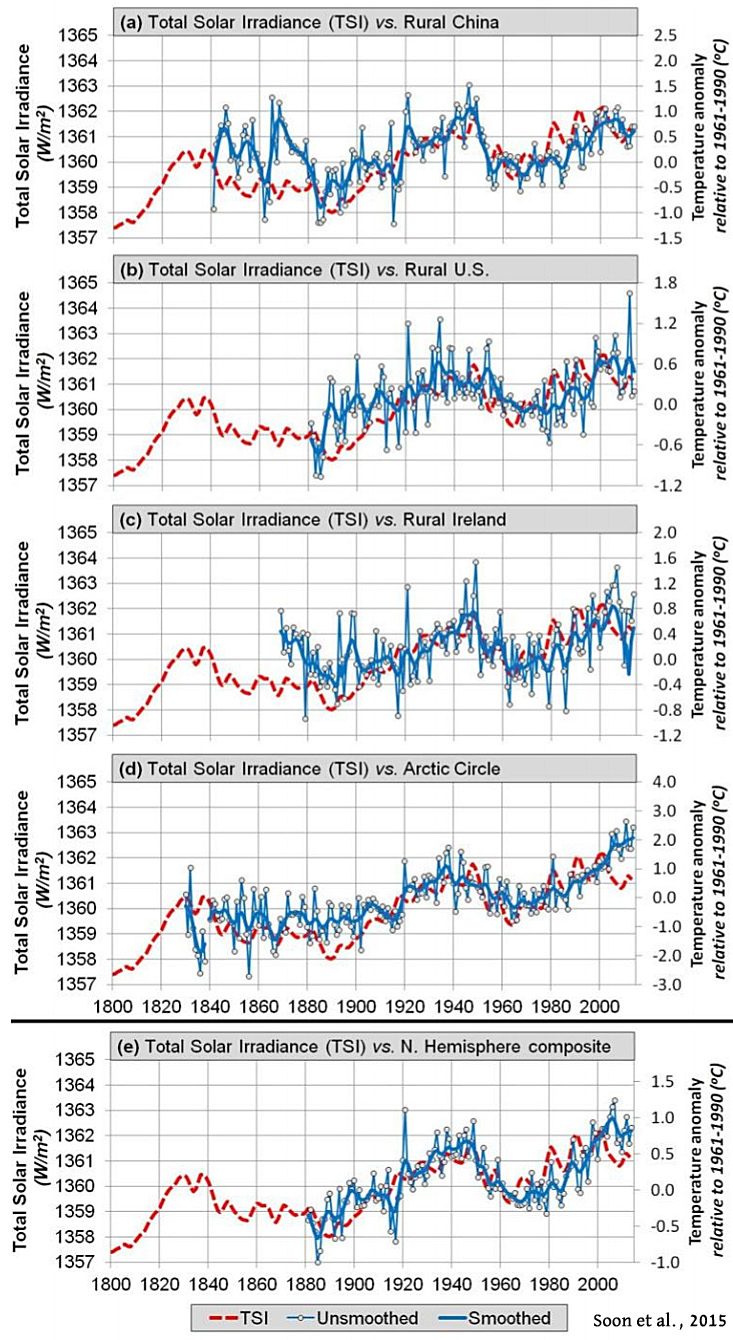 A new paper (Scafetta et al., 2019) also finds the global temperature record aligns well with trends in TSI when using the observation-based ACRIM satellite data rather than the model-based (and IPCC-preferred) PMOD data for trends in recent decades. 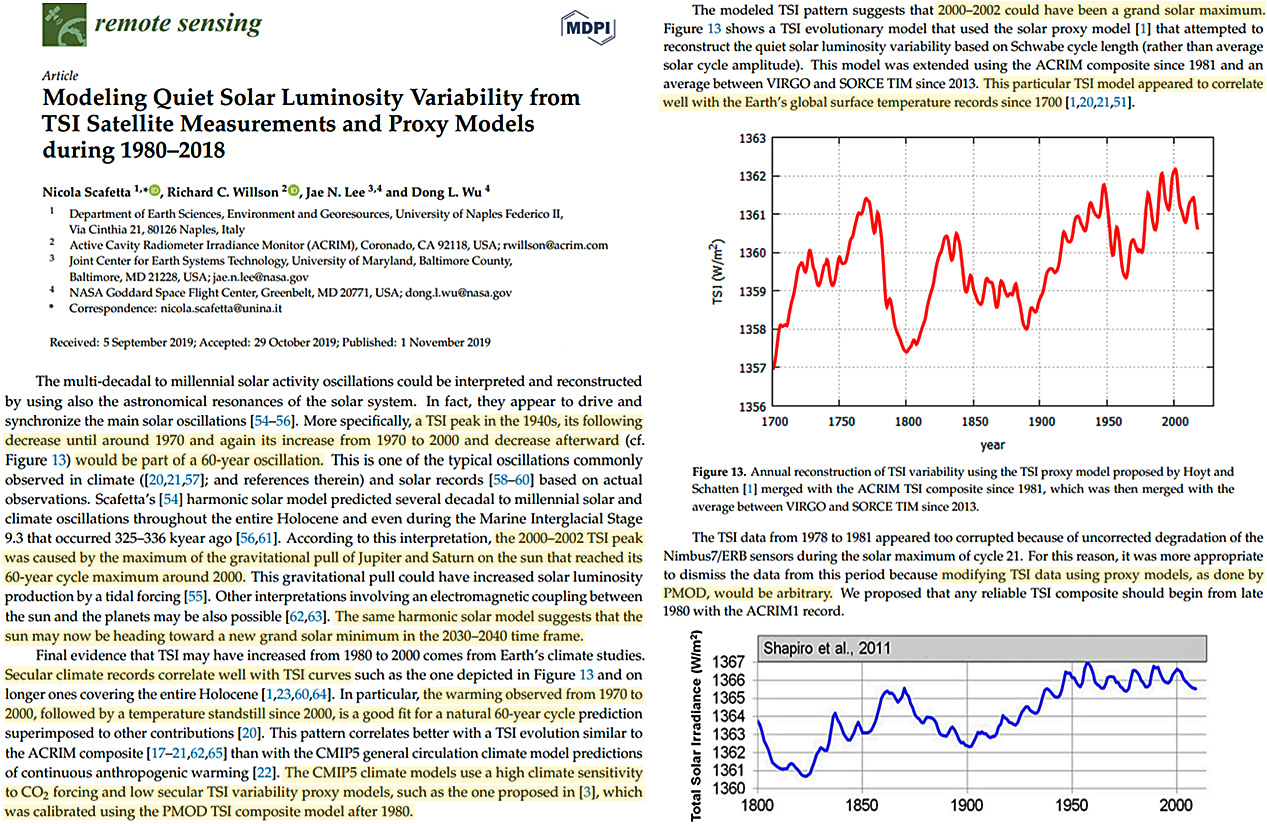 “By adjusting the TSI proxy models to agree with the data patterns before and after the ACRIM-gap, we found that these models miss a slowly varying TSI component. The adjusted models suggest that the quiet solar luminosity increased from the 1986 to the 1996 TSI minimum by about 0.45 W/m² reaching a peak near 2000 and decreased by about 0.15 W/m² from the 1996 to the 2008 TSI cycle minimum. This pattern is found to be compatible with the ACRIM TSI composite and confirms the ACRIM TSI increasing trend from 1980 to 2000, followed by a long-term decreasing trend since.”

“This model was extended using the ACRIM composite since 1981 and an average between VIRGO and SORCE TIM since 2013. This particular TSI model appeared to correlate well with the Earth’s global surface temperature records since 1700 [Hoyt et al., 1993, . … The TSI data from 1978 to 1981 appeared too corrupted because of uncorrected degradation of theNimbus7/ERB sensors during the solar maximum of cycle 21. For this reason, it was more appropriate to dismiss the data from this period because modifying TSI data using proxy models, as done by PMOD, would be arbitrary. We proposed that any reliable TSI composite should begin from late 1980 with the ACRIM1 record.”

“The same harmonic solar model suggests that the sun may now be heading toward a new grand solar minimum in the 2030–2040 time frame. Final evidence that TSI may have increased from 1980 to 2000 comes from Earth’s climate studies. Secular climate records correlate well with TSI curves such as the one depicted in Figure 13 and on longer ones covering the entire Holocene [1,23,60,64]. In particular, the warming observed from 1970 to 2000, followed by a temperature standstill since 2000, is a good fit for a natural 60-year cycle prediction superimposed to other contributions [20]. This pattern correlates better with a TSI evolution similar to the ACRIM composite [17–21,62,65] than with the CMIP5 general circulation climate model predictions of continuous anthropogenic warming [22]. The CMIP5 climate models use a high climate sensitivity to CO2 forcing and low secular TSI variability proxy models, such as the one proposed in [3], which was calibrated using the PMOD TSI composite model after 1980.” 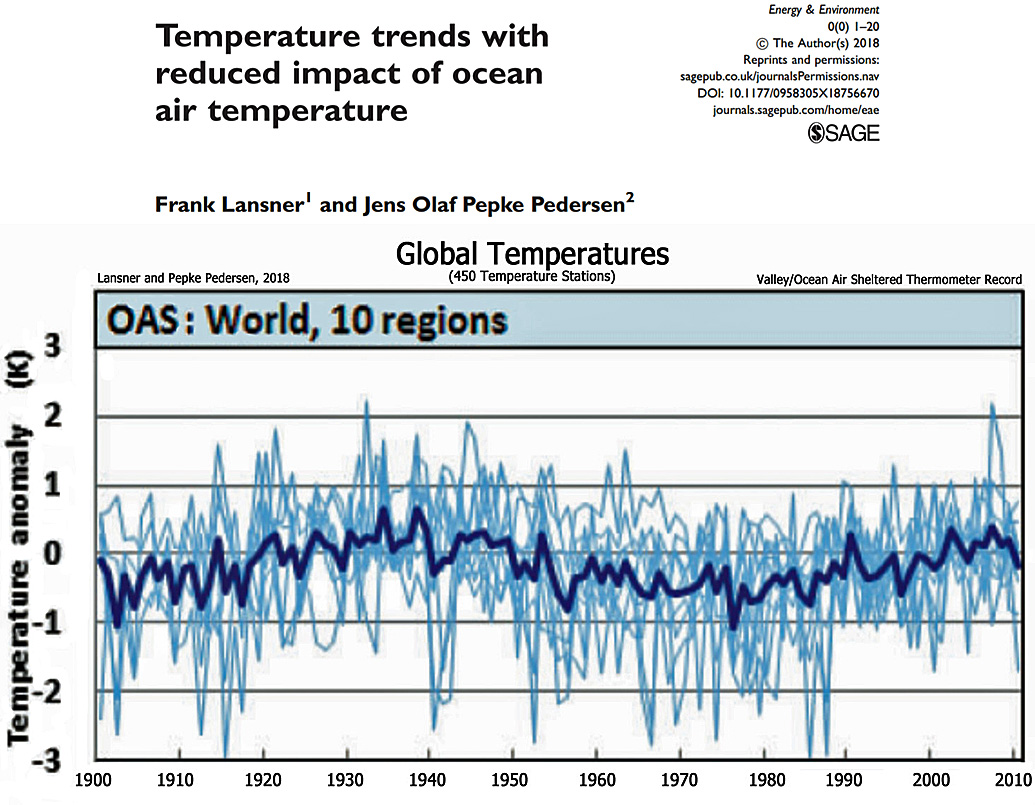