So typical of climate science. Everything in and around it gets wildly exaggerated in order to feed media consumption and deceive the public. Reports are emerging that the “500,000 people” crowd awaiting Greta in Madrid was in fact as low as 15,000, according to Spanish federal police. 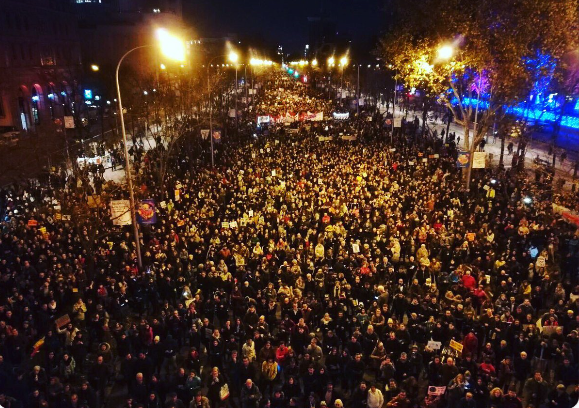 By A. R. Göhring
(German text translated/edited/supplemented by P Gosselin)

After Greta Thunberg’s arrival in Madrid, there was an “unprecedented demonstration” for climate protection in the Spanish capital, supposedly involving 500,000 participants.

But the federal police say there were about 15,000 (!) demonstrators.

At German news outlets, people could read that Greta Thunberg at first had to interrupt participating at the demonstration in Madrid – because of so many people and security could not be guaranteed. Later she stood on a stage with famous Hollywood actor Javier Bardem and gave a speech.

There were, as usual, no scientific facts to be found, but a lot of feeling, self-righteousness and general demands to an ominous elite, who officially stand behind Thunberg’s FFF.

The leaders are betraying us. Enough is enough. Change comes whether you like it or not. We want to see action.” [translated from the German]

Bardem seconded: “We only have ten years to mitigate the worst effects of climate change.” He also hit the Mayor of Madrid, José Luis Martinez-Almeida, and President Donald Trump for their “stupid” measures against climate change.

The Spanish media, but also the Austrian ORF, are now discussing falsified numbers of participants. The mass media had spoken of 500,000 demonstrators. That would mean that Greta caused one of the largest climate protection demonstrations on the planet in Spain.

Largely empty seats in Katowice in 2018

Those who remember the coverage of the world climate conference COP24 in Katowice, Poland, know that Thunberg’s “breakthrough”, an emotional and panic-stricken speech in front of a “large” audience, had already been manipulated. In fact, the 15-year-old Swede spoke in front of largely empty rows of chairs, which was not visible in the media due to the skillful selection of photographic and film perspectives.

Therefore the brash falsification of the numbers is not surprising. The organizers of the demonstration spoke of half a million participants, but the large newspaper El País spoke of 25,000 to 35,000, and the Spanish federal police of only about 15,000 people with the help of helicopter images.

Experience has shown that the police always give quite low numbers of demonstrators, but the unusual use of aerial photographs makes this figure seem convincing.

If one calculates the real number percentage of the FFF fantasy figure, then you come up with three percent. 97% of the claimed figure is presumably a lie. Demonstration organizers like to give slightly higher figures, but 30 times above reality is already extraordinary, especially in a globally important political PR campaign filmed by numerous cameras.

The knowledgeable climate sceptic is also quite familiar with the 97% figure – with respect to ex-President Barack Obama and climate psychologist John Cook. One sees how huge and audacious exaggerations / counterfeits are part of the climatic profiteering business. Isn’t that risky? Wouldn’t it be better to manipulate more cautiously so that there’s less to be accused of?

Obviously, those who don’t panic enough achieve less. Moreover, even critical citizens often would not imagine that someone would publicly falsify in such a brazen manner.