Child abuse by German WDR 2 public broadcasting? Young schoolgirls taught to hate, made to sing “My grandma is an old environmental scumbag” because she drives an SUV, eats meat and takes cruises 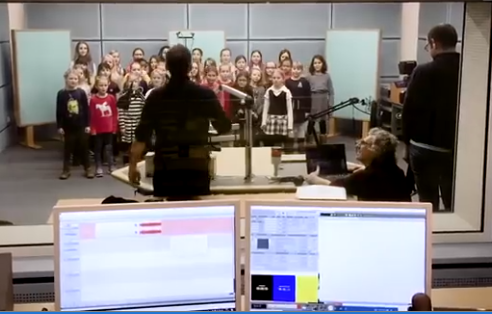 We all recall how at the UN, green wunderkind Greta Thunberg lambasted the older generations for allegedly ruining the planet, climate and even her future. She also threateningly warned that her generation “will be watching” us.

Greta’s generation would like to have everyone believe that all of today’s social ills have been caused by the an irresponsible generation which now needs to step aside.

Today’s young generational hostility in Europe has hit unprecedented levels, thanks to environmental radicalism and zealots in and out of the media.

Note that these kids did not just become naturally hostile to its older generations on their own. They got plenty of help being taught to be so by hateful by extreme activists who have an environmental and tyrannical agenda.

The latest example of indoctrinated intolerance and hatred is brought to us by WDR 2 German public broadcasting, which on December 27th choreographed and proudly broadcast a children’s song with lyrics dehumanizing senior citizens – grandmothers in particular – as “old environmental scumbags”!

WDR 2 video. The new German generation of supremacists? Indoctrinated German schoolgirls singing about how their grandmothers are scumbags.

Featured is a chorus of smiling, young German schoolgirls singing: “Meine Oma ist ne alte Umweltsau” (My grandma is an old environmental scumbag) lambasting grandmas and the older generation supposedly because they use SUVs and fly to go on their holidays, and so are creating a global mess.

The song, meant to environmentally indoctrinate kids, didn’t go down well with the usually patient German public, especially with the older generations, which demographically have become the country’s largest voting sector.

The song triggered harsh and controversial reactions, as among others recipients felt (and others) hurt and even looked down on,” reports bedeutungonline.de.

“Gee, it was just a little humor”

Needless to say, after some hesitation and weak attempts to defend or to play it all down, the song was taken offline in the night of December 28. Now the WDR 2 and green activists are falling all over themselves insisting it was just an innocent parody and they didn’t mean anything bad with it, and implied how it’s unfortunate some people can’t take a little joke.

Well, teaching kids to hate is no laughing matter – especially in a country with a very problem history.

What follows are the song’s text in English, so you can judge for yourself.

My grandma says riding a motorcycle is cool…
She uses it as a wheelchair at the retirement home. My grandma is an old environmental scumbag.

My grandma drives to the doctor in an SUV.
She runs over two old ladies with a rollator, my grandma is an old environmental scumbag.

The song ends with the audio quote by Greta Thunberg: “We will not let you get away with this!”

The WDR 2, of course, was funded to produce this political rubbish and to commit this child abuse – through mandatory fees levied on every citizen in Germany.