Despite phony wind lobby surveys claiming that over 90% of Germans support an expansion of wind power (and only a 5% fringe oppose), German wind park projects have hit the brick wall of intense citizens’ protest. 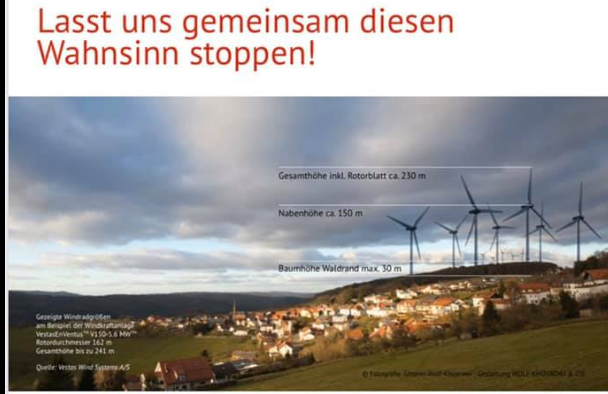 German protesters demand a stop to the “madness” of the industrialization of nature. Image: proNatur Citizens Initiative.

For example, German environmental protection group www.naturschutz-initiative here reports how the approval for three wind turbines in the Butzbach municipal forest granted by the Giessen Regional Council on 12 October 2018 has been deemed illegal.

According to their press release:

After the discussion meeting on 22 January 2020, the administrative court revoked the permit on 28 January 2020. The environmental association Naturschutzinitiative e.V. (NI) had taken legal action against the State of Hesse primarily because in its opinion the permit violates European law. For example, exceptions to the ban on killing wasp and buzzard were permitted which are not compatible with the European Birds Directive.”

In the region of Odenwald/Rothenberg, a planned additional wind farm of 13 turbines, each 250 meters tall, on the ridge between Rothenberg and Beerfelden was met with fierce protest from 300 demonstrators, reports regional online site Fact.de here.

According to Fact.de, “It was a strong appearance of the young Rothenberg citizens’ initiative proNatur, with support from many parts of the Odenwald.

Irmgard Neuer, spokeswoman of the citizens’ initiative said: “A good 300 people of all age groups had gathered at the gymnasium in Rothenberg with banners, drums, whistles and warning vests to loudly oppose the planned additional wind farm of enormous dimensions in the region.”

“No positive effect on nature”

One of the protest mobilizers, leader Vera Krug of Siedelsbrunn, admonished her fellow protesters “not to let up and to inform all fellow citizens about the negative effects of the industrialization of nature”.

“No destruction of nature ever has a positive effect on the climate”, Vera Krug stated.

Local citizens fear that the quality of life in the area would be severely damaged by the installation of 13 huge wind turbines “without any real benefit for the climate”.

Before the demonstration at the village center broke up, ‘everyone agreed that the destruction of nature by wind industry plants should not be allowed either in the Odenwald or in any other forest’.”

Wind turbine proponents were surprised by the large protester turnout.

Bitter divisions in once peaceful communities

Wind energy opposition has become an extremely  polarizing issue in Germany, one that has led to bitter divisions in once peaceful communities, especially those in rural areas.

The issue of rural wind park industrialization has become such a hot topic that according to Fact.de: “Ruth Bender of the Wall Street Journal had traveled from Berlin to report on the demonstration. She stayed overnight at the local “Hirschen” and talked to several protagonists on site. The Südwestrundfunk (SWR) had also sent a camera team to Rothenberg for reporting.”