Before we jump into the data, readers may have noticed that NoTricksZone is now accepting donations – after close to 10 years of not doing so. Hosting services and the hourly rates specialists charge for troubleshooting are painfully expensive, and so any support, no matter how small, is very much appreciated.


I’ve gotten some donations since I’ve installed the donation button, and so it’s very encouraging. Thanks to those who have done so.

And no, I’m not nor have I ever been funded by Big Oil, The Heartland Institute, Big Coal, the Koch Brothers or anything of the sort. Everything has been out of my own pocket. Thanks, Pierre

Today we look at the data from the Japan Meteorological Agency (JMA) mean temperature for Canada. Examined are the 9 stations that have almost complete data going back to 1983.

Nine of the 9 stations show February mean temperatures have had a cooling trend since 1996:

Looking at the JMA data for mean annual temperatures for Canada, we see that no significant warming has taken place at the 9 stations since 1994! 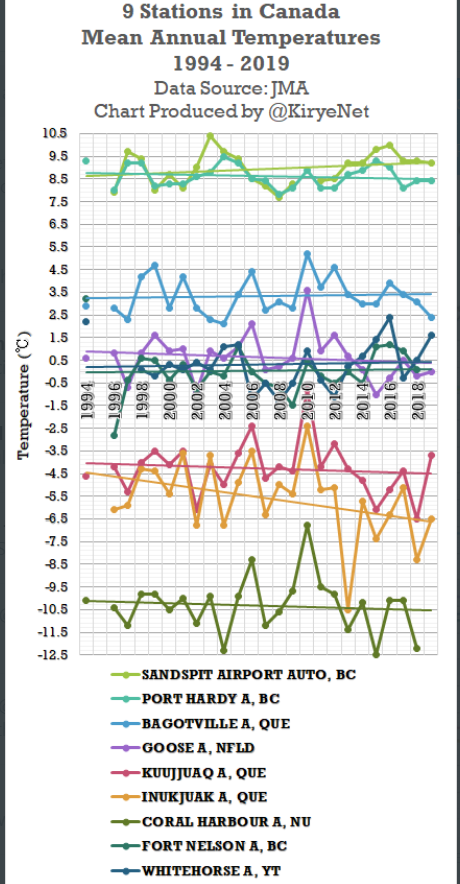 Yes, the climate is changing, but nothing unusual is happening. The changes are well within the natural range of variability and so cannot be wholly attributed to man’s activities.

In fact, using the data and results that are available, one can easily argue that the recent warming is related to ocean and solar cycles. There’s nothing to be alarmed about.

Worry about Corona and political threats, and not climate.