Climate Crisis RIP: People Will Be In No Mood To Stay In Panic Mode After COVID-19 Scare Ends 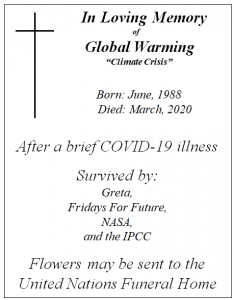 COVID-19 has not only been a nightmare for the public worldwide, but especially for “climate crisis” alarmists who have seen their agenda disappear from the media radar. And it’s going to stay off the radar for quite some time. People can take only so much panic and restriction.

Once the COVID-19 crisis subsides, and it will in a few months, the global citizenry will be in absolutely no mood to keep on panicking. They’ll want to go back to the prosperity they previously enjoyed.

There are several reasons the climate crisis isn’t going to come back soon.

First off, it’s human nature to address only dangers that are truly present. Though many believe there’s a climate crisis, it’s one that is perceived to be years, even decades, off into the future. So there’s no sense of real urgency like the immediate sort we’ve been seeing with COVID-19. So what if sea level rises 2 feet by 2100. I can move in 30 years – long before it ever gets here!

People will be sick and tired of panic

Secondly, by the time COVID-19 passes, citizens will be sick and tired of panicking, and they aren’t going to be in the mood for a continued high level panic over something far, far less urgent. They’ll have had enough of lock downs and sacrificing and aren’t going to be very open to sacrificing for the weather.

Too many people aren’t buying the flaky climate crisis “science”

A third reason is that the climate crisis is still highly uncertain and increasingly hotly disputed. Much of the science behind it is flimsy. While it has been crystal clear that COVID-19 is urgent, especially for the elderly, the climate crisis is fraught with huge uncertainties and flaky science. Too many people just aren’t buying it. They’re going to take the let’s-wait-and-see attitude before flying off the handle again.

The media aren’t going to keep up the high panic

Fourthly, the media can’t devote the same attention to the “climate crisis” that they did to COVID-19 simply because people would just tune them out, and rightly so. Enough is enough. People will want to get back to normalcy. Who in their right mind would want to spend the rest of his life in a state of panic like the alarmists propose?

Why would people — already fatigued by the COVID-19 panic — worry about a climate doomsday when summer is finally there?

And despite all the hype surrounding Greta and Fridays for Future, a recent study by the organization Media Matters, revealed that there was only 238 minutes of climate crisis coverage by major US networks in 2019!

So after COVID-19 subsides, the networks aren’t going to keep crying doomsday. They know they’ll be tuned out totally if they do.

Moreover the climate warnings have been going on more than 30 years now and people had been tuning them out already, and for good reason. Life on the planet by most measures is far better today. All the dire predictions made in the 1990s and 2000s never came to pass.

Finally politicians will be very wary about calling for more pain to combat a distant, dubious threat. Doing so after going through the pain of COVID-19 would be tantamount to political suicide.

Dictatorship as the last hope for the climate crisis?

“As heretical as it may sound, there are valid questions to be raised about whether a democratic system with regular elections is suited to dealing with an issue that requires short-term sacrifice for long-term benefits,” wrote Joe Wiggins, a researcher in fund management.

Good luck with that.

38 responses to “Climate Crisis RIP: People Will Be In No Mood To Stay In Panic Mode After COVID-19 Scare Ends”