In an interview with Punkt.Preradovic, finance Prof. Dr. Stefan Homburg of the Leibniz University of Hanover said Germany’s lockdown has “amounted to nothing”, has had no effect on the spread of the corona virus and that the spread had already slowed down below a reproduction number of 1.0 before the lockdown.

In the interview, the prominent professor, once an adviser to former chancellor Gerhard Schröder, cited a chart from the Robert Koch Institute (RKI) that was issued on April 15th: 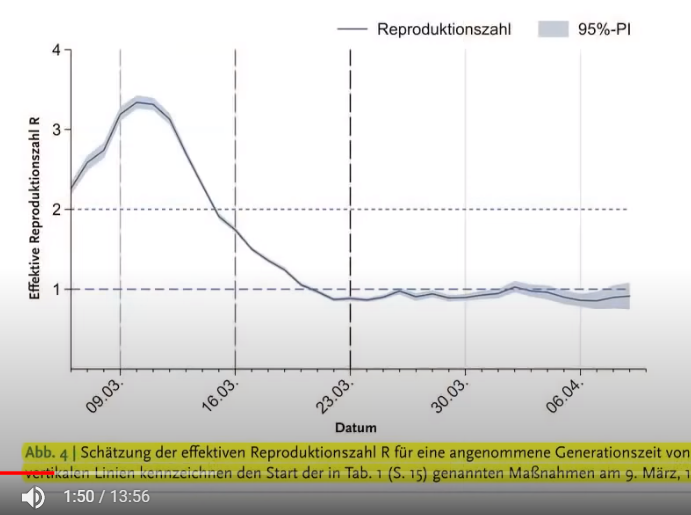 It wasn’t until March 23 that the German government decreed a lockdown. As the chart shows, since the lockdown was enacted, the reproduction number did not change at all. It’s had no effect.

Homburg agrees that the lockdown led to “enormous economic damage” and was “completely unnecessary”. In view of the data, Homburg does not know why the lockdown continues even today. Currently the reproduction rate stands at 0.7.

Homburg tells Preradovic that the politicians issued the lockdown in panic, came too late and thus so served no purpose. “It was not only unbelievably damaging for the economy, but also for other human factors. It’s about suicides and delayed operations.”

Citing the RKO numbers, Homburg also says: “There is not going to be any terrible epidemic. All the panic was fanned by the Robert Koch Institute, who said on March 20th that in the best case we will see 300,000 dead, and maybe 1.5 million dead.” Today the number is well under 5000.

Homburg explains that the origin of the alarming death projections were adopted by the RKI from one single alarmist paper and that “it’s unbelievable that the government allowed itself to be so misled.”

Financial ruin for no reason at all

On the overall situation, Homburg comments: “It’s completely unimaginable. Huge damage is being caused. People and businesses are being financially ruined without any reason at all.”

On why it’s happening, Homburg says that German politicians, such as Angela Merkel, have gotten full cover from the media, and today enjoy high approval ratings because of the appearance of being competent crisis managers. And as long as the polls remain so, Homburg says, there’s little incentive for politicians to relax the lockdown.

Trump may wish to take a look at what’s happening in Germany, and move fast to end the destructive lockdown in USA.