The scientists found that the ice shelf is prograding (expanding), and not breaking apart like some alarmist scientists feared earlier. 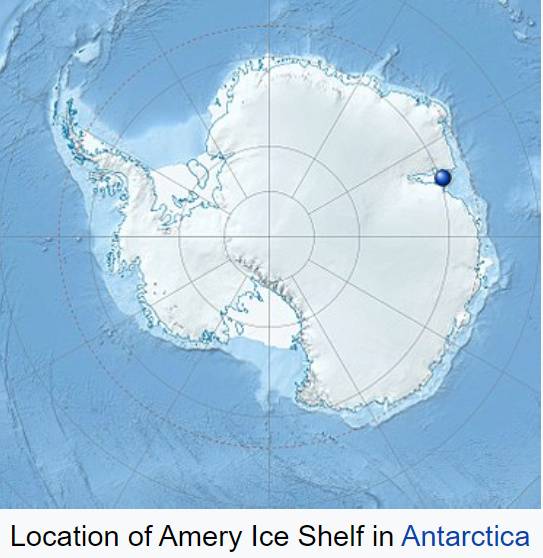 Wikipedia tells that in December 2006, “enormous cracks” had been forming for over a decade at a rate of three to five metres a day – possibly due to global warming – but researchers later said it was too early to attribute the phenomenon to global warming because of the “possibility of a natural 50-60 year cycle being responsible”.

Now the recent paper by Kumar et al reports findings that the Amery Ice Shelf (AIS) is not disintegrating, let alone shrinking, but rather is advancing!

Once readers get past the scientific gobbledygook of the paper’s abstract, (possibly intended to obscure the paper’s inconvenient results) it becomes clear the ice shelf there is growing. “Amery Ice Shelf extent is prograding considerably in the last two decades.”

The scientists reconstructed the past and made a prediction of the future-ice shelf extent using linear regression techniques. They found that changes in the ice shelf extent “are linked with ocean-atmosphere interaction”. That means natural factors are dominantly at work, and not the anthropogenic ones.

According to the paper’s abstract: “The study reveals that the AIS extent has been prograded at the rate of 994 m/year with an average 14.5 km increase in the areal extents during 2001–2016, as compared to the year 2001, whereas, the maximum advancement in ice shelf extent was recorded during the 2006–2016 period.”

The study also found that the eastern part of Mackenzie Bay to Ingrid Christensen coast also “recorded advancement in ice shelf extents and mass” and that this was in part linked to “a decrease in the temperatures (air temperature and sea surface temperature).