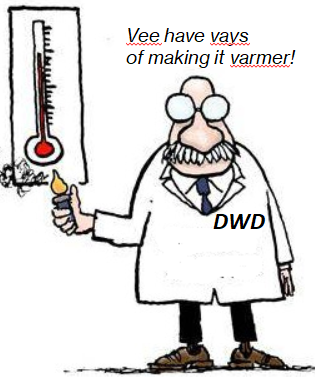 Independent meteorologists say the readings needs to be thrown out

Last year on July 25th, the Lingen thermometer reached a whopping 42.6°C, far eclipsing the old German all-time record of 40.3°C. But that recording quickly came under fire by independent weather experts who say the station data were  corrupted by siting issues. The Lingen station is located in a depression in the earth, near a parking lot, and shielded by trees from the wind, thus creating the ideal conditions for trapping heat.

Last year NTZ reported on the controversial record here noting that surrounding stations did not even come close to record reading in Lingen. What follows is a comparison of the Lingen’s readings to those of 6 nearby stations over the five day period, July 23 – July 27:

On every single day, Lingen handily beat its neighbors by at times huge, red-flag-raising margins.

Today, a year later – as reported by Bild – meteorologists continue to slam the Lingen record.

On May 20th, the station had 23.6 degrees. In the neighborhood it was below 20 degrees.

On May 10, 27.7 degrees were measured in Lingen, in the neighborhood it was barely over 24 degrees.”

“Massive doubts”…”definitely not the warmest place”

Bild also notes that German meteorologist Dominik Jung (wetternet.de) “massively doubts the results of the station in Lingen” and that “it is dubious that the DWD allows such a weather station at all.”

Jung adds: “The station should be moved.”

Bild also cites meteorologist Dr. Karsten Brandt of donnerwetter.de: “The station in Lingen has the problem that it is located in a depression, which heats up the temperatures. This is definitely not the warmest place in Germany.”

So is Germany’s DWD National Weather Service, which operates the station, ready to dump Lingen’s overheated data? Bild reports that the DWD plans to stick to the Lingen readings, deeming them to be of good scientific quality.

The DWD replied to Bild: “As a result of a site assessment, it can be stated that the station conditions have no serious influence on the temperature measurements and therefore do not contradict the WMO standards.”

Exactly. There’s nothing suspicious at all about a station routinely being 3°C warmer than all the others around it. Silly anyone would get the idea to question that.