Central Europe has been getting WETTER over the long term, and not drier like much media like to suggest. Dry years are nothing new.

Lately in Central Europe we’ve been hearing a lot about drought becoming the new normal – all because of man-made global warming, of course.

Lots of hype made from 2 years of “drought”

For example, euronews.eu here reported that the single dry year of 2018 should be a “wake-up call for climate change”.

Scientist Peter Hoffmann from the Potsdam Institute for Climate Impact Research expects even more frequent drought-producing omega highs blocking in the future – due to climate change.

Today the media keep reporting Central Europe’s current dry conditions, which have persisted over the past two years, as if they have been unprecedented. Is it really so?

It’s useful to go back again and look at the precipitation data for Germany – which well represents Central Europe. 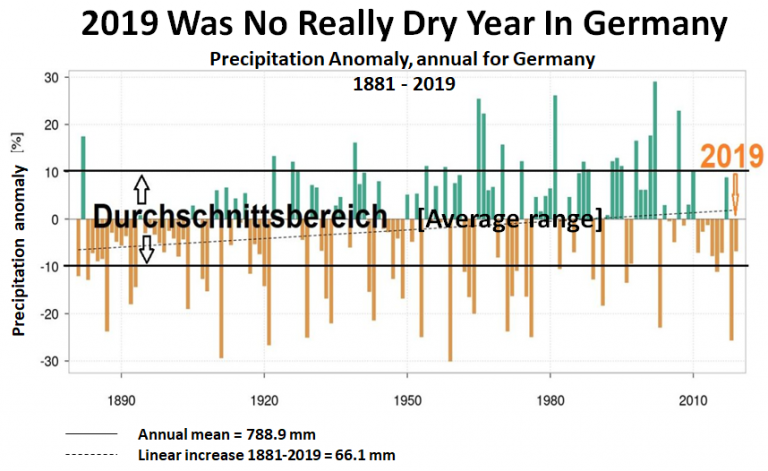 Central Europe was far drier back when CO2 was below 300 ppm, before 1900. Long-term trend has been towards a wetter climate. Data: German DWD National Weather Service.

As the chart above shows, extremely dry years like 2018 happened before, and 2019 precipitation was even well within the 10% variability range.

So the next time you hear doom and gloom reports from the COVID-19 hysteria media about Europe’s droughts being the new normal and we’re all gonna dry up and die unless we lock down fossil fuels, just dismiss them as more fake news.

3 responses to “Hype Exposed: Central Europe GETTING WETTER (Not Drier) Since Industrialization Began”