From the Atlantic to the Alps: westerly winds have determined the climate in Central Europe for 14.5 million years

(Translated/edited from the German by P. Gosselin) 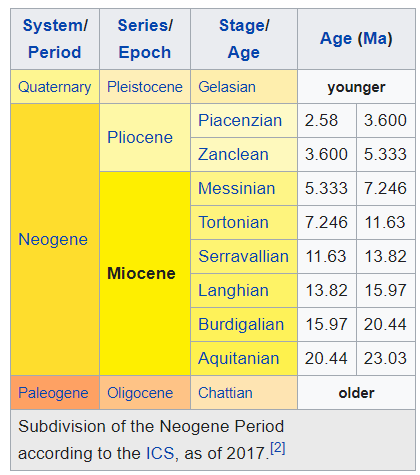 Senckenberg scientists in Germany have just studied the climate optimum of the Middle Miocene in Central Europe 17 to 14 million years ago. At the end of this long warm period, there was a global cooling that was much faster and more dramatic on land than in the ocean.

This is what the team currently reports in the journal “Scientific Reports” of the Nature Group.

At the same time, a precipitation pattern was established in Central Europe that corresponds to the one of today. According to this, the westerly wind system influenced by the North Atlantic has been one of the main drivers of the Central European climate ever since, and thus three million years earlier than previously assumed.

Crocodiles and chameleons camp under palm trees in the foothills of the Alps – what seems fantastic today was reality 16 million years ago. At that time, Central Europe had a subtropical, warm and humid climate with an average annual temperature of up to twenty degrees Celsius and frequent precipitation. The warm period of that time, the climate optimum of the middle Miocene, is from today’s point of view quite an analogy for our future climate development. However, as is already known from the analysis of marine sediments, the “eternal summer” of the Middle Miocene was over about two million years later (14 million years ago).

Senckenberg scientists now provide the first evidence that the end of the climate optimum was much more dramatic on land than in the ocean. “Between 14.48 million and 14.13 million years ago today – in a period of just 350,000 years – the temperature sank rapidly. From a geological point of view, that’s extremely short for such a temperature drop. We know from marine sediments that the sea, more slowly and gradually, cooled down by only one to six degrees,” explains Dr. Katharina Methner from the Senckenberg Biodiversity and Climate Research Centre.

The warm anomaly in the Middle Miocene and its rapid end in Central Europe left its imprint in carbonates that were then formed in soils. Such “fossil soils” are found, for example, at the edge of the North Alpine foreland basin in Switzerland, where they were sampled by Methner and her colleagues*.

The geoscientists reconstructed  how warm the soils became during carbonate formation in the soil using geochemical methods based on the distribution of carbon and oxygen isotopes in the carbonate. “With the help of isotope geochemistry, it can be deduced from such carbonates that the temperature curve in the Alpine foreland was extremely dynamic during the climate optimum in the Middle Miocene,” says Prof. Dr. Andreas Mulch, Senckenberg Biodiversity and Climate Research Centre and Goethe University.

Surprisingly, the results also show that the precipitation seasonality must have changed significantly before 14.5 million. During the cooling down period, it generally became drier in Central Europe. In addition, the distribution of precipitation over the year is now different. Most of the rain in Central Europe probably fell – as it still does today – in summer.

The climate optimum in the Middle Miocene, with high carbon dioxide levels, a high sea level and the reduced occurrence of sea ice, shows clear parallels to the climate change we are facing today. Nevertheless, little is known about this warm period and its end, in contrast to other warm periods in the history of the earth.

Climate changes “have occurred repeatedly throughout the history of the earth”

Methner says: “Climate changes in the form of fluctuations in temperature and precipitation have occurred repeatedly throughout the history of the earth. Only if we understand the dynamics and drivers of these fluctuations better can we estimate what the future holds. And we will contribute to this with our findings.”

3 responses to “No Changes Behind The Changes: New Findings Show Europe Climate Driven By Westerly Winds For 14.5 Million Years!”