Today we look at the NASA data from 6 stations from the US southeast region. In every case the trends were warmed up by what NASA calls “adjusting”.

Four of the 6 stations showed a clear cooling trend, which were then altered by NASA to show warming. Another station saw its flat trend turned into warming, and a another station had only modest warming but was altered to show stronger warming.  This is how NASA tells us the US has been warming over the past century, when in fact it really hasn’t warmed much.

NASA’s own data tell the story.

First we look at Greensboro, Alabama. Here we see how warm it was in the 1930s, 1940s and 1950s, but look what happened once NASA GISS scientists got their hands on the data: 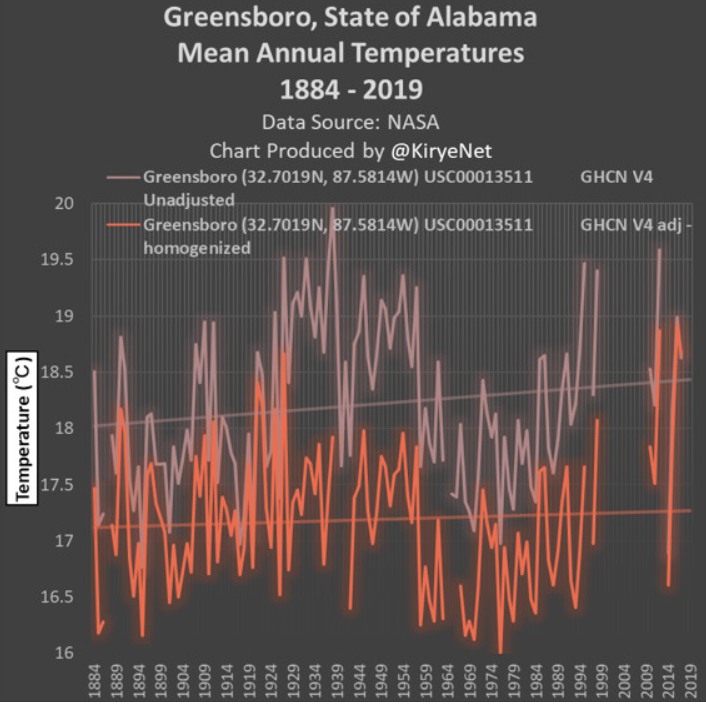 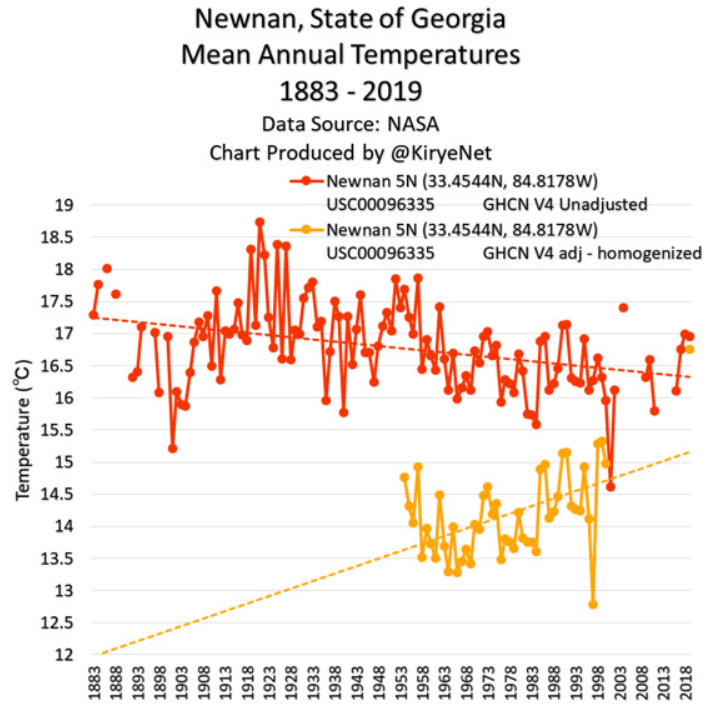 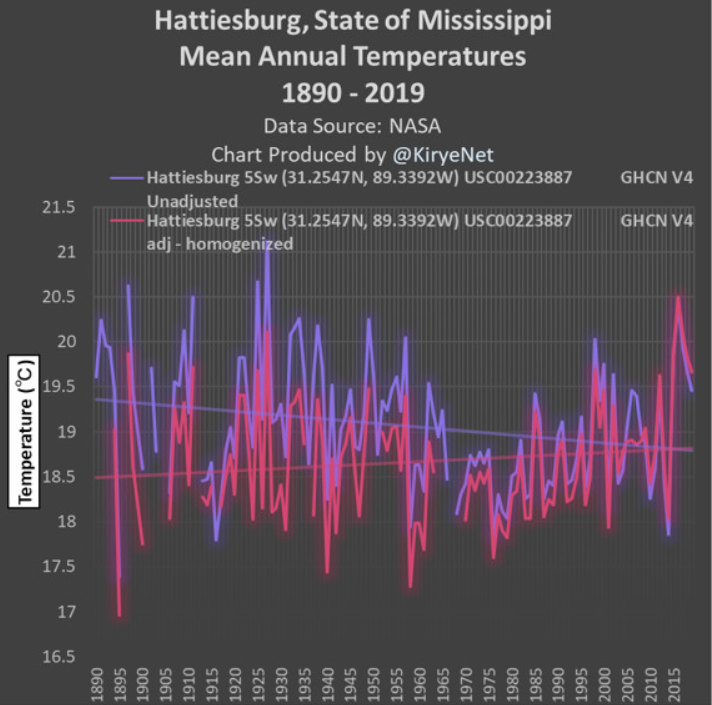 If these types of people are capable of unabashedly rewriting history, imagine what they wouldn’t think twice about at the ballot boxes this coming November. Look at what they did to the data from the Little Mountain station in South Carolina: 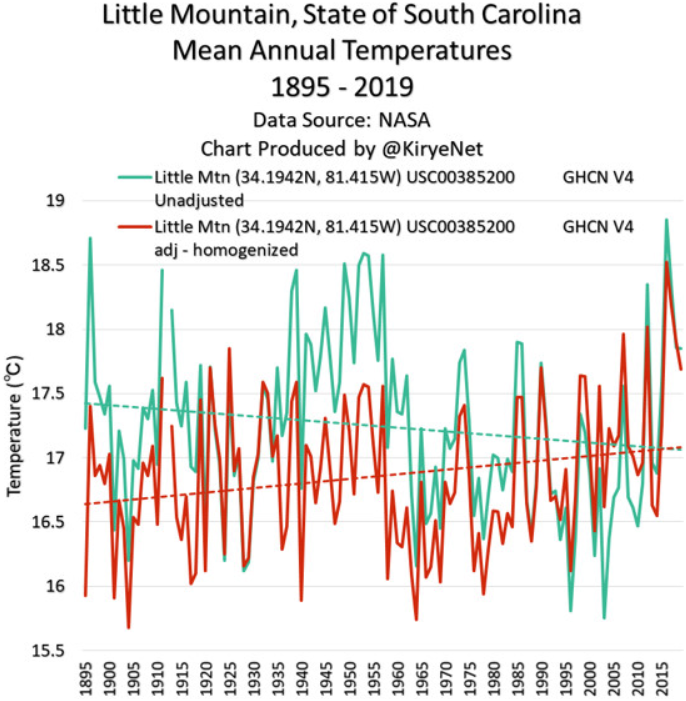 Well, at least there wasn’t any cooling recorded at the station of Cullowhee, North Carolina, as the next chart shows. But NASA insists that it has to be some warming, and so cooled the early data so that we get a warming trend. 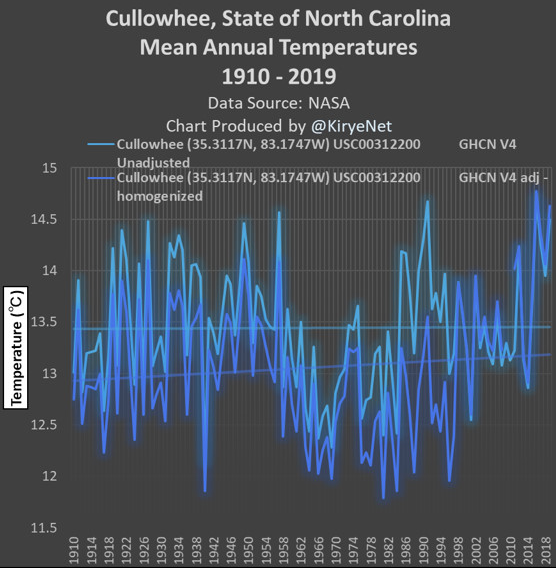 Finally we look at what NASA did to the temperature data from Lake City, Florida, below. A clear cooling trend was altered to show warming. NASA GISS scientists obviously have no scruples about turning historical records into modern lies. Anyone else would be put on the dock for such deceit – at least intensely investigated. 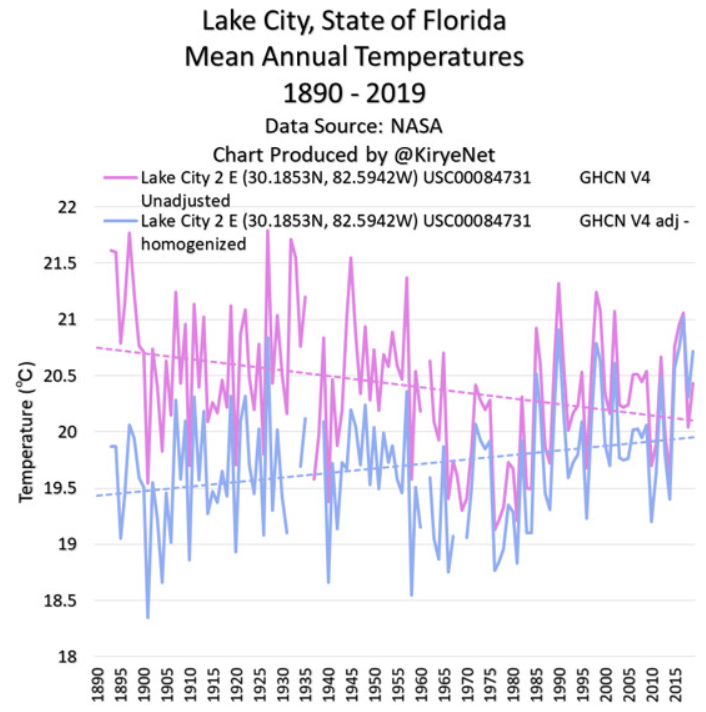 But NASA GISS scientists get away with it because they’re “experts”, we are told, and so who are we to question them – no matter how fishy it all appears? There’s no one to really police them. Unless this stops, very dark tyrannical times lie ahead for us. The alterations are systemic.

UPDATE; And here’s the plots for a station in Tennessee (no surprise here either):

GHCN V4 Unadjusted data show Waynesboro, State of Tennessee, has had a cooling trend since 1885!
But NASA changed the data.
I wonder why this kind of scientific deceit is accepted silently by many media?https://t.co/tSJN3Sdq9S
~#地球温暖化? #温暖化？ #気候変動 #ClimateChange pic.twitter.com/97qgDo8Mrt