On June 28, two days ago, German psychology student ‘Sebastian’ released a video that completely demolishes the hype surrounding the COVID-19 “pandemic” and how dangerously authoritarian the government is handling the matter.

It claims that the basis supposedly underpinning the lock-down was “grossly unscientific” and that the numbers were padded to create fear and panic among the public.

The video is also available here with English subtitles, thanks to Tony Heller.

Released just yesterday, the documentary has already been viewed 300,000 times and surely will become controversial and attacked viciously by self-anointed “fact-checkers”.

Watering down definition of a pandemic

In the video, Sebastian begins by noting how in 2009 the WHO removed two criteria that were part of the definition of a pandemic: there had to be high death counts in a number of countries. “Today that is no longer the case,” says Sebastian. “Why the change was made is unclear.”

Sebastian also explains how the media and authorities use tricks to make the numbers appear worse than they actually are, for example showing how the number of “infected persons” is very different from the number of people who “test positive”. The number of infected is much higher. And so if that number were used to calculate the death rate, then the death rate would be much lower. But the authorities hide that.

There never was an exponential growth

Next the German psychology student shows how the weekly number of cases increased in late March not because the virus was rapidly spreading, but because the testing rose dramatically. More tests = more cases. But the media and authorities made it look like the virus was spreading faster when it really wasn’t. But that trick was enough to cause the panic and allow the government to get away with enacting the economy-crushing lock down.

The reality, however, is that there never was an exponential growth. Sebastian adds that there was a failure to distinguish between the number of infected and the number who are actually ill: “Not distinguishing the two is not only negligent, but grossly unscientific.”

The young German critic also sharply criticizes the methodology used to count the number of people dying from COVID-19. Every death where the patient tested positive was deemed to be a COVID-19 death, no matter what the real cause was.

“In other words, if today I was tested positive with Corona and showed no symptoms, and tomorrow I jumped out of a window, then Corona would be the official cause of death,” says Sebastian. “That’s astonishing! That’s what we call the falsification of scientific data. It’s the worst thing a scientist can do.”

And that’s how we get a “massive overstating” of the death rate, the documentary shows.  The chart below depicts how 2020 has been a rather normal year in terms of daily death in Germany. Things were dramatically worse in 2018, when the country was reeling from the flu, in the absence of media hype: 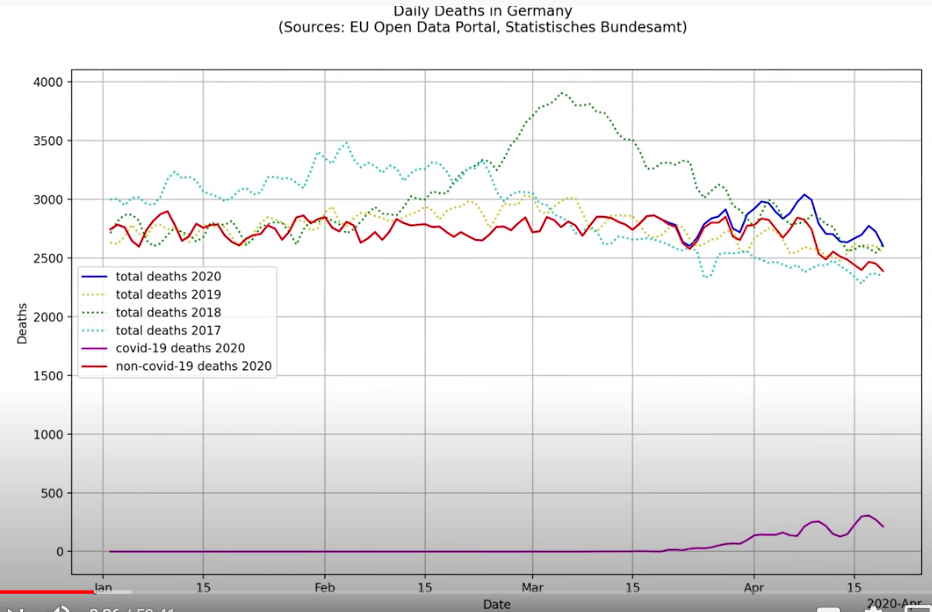 “We’re nowhere even close to 2017 and 2018,” Sebastian notes. “These numbers alone are enough to convince me that the restrictions were totally over the top.”

The German student, whose video has been seen over 300,000 times since its release two days ago, also shows how COVID-19 is no more dangerous than the regular flu, citing recent publication by Streeck et al, which found a COVID-19 death rate of maximum 0.36%. Also the figures show “COVID-19 is not significantly more contagious than influenza.”

The documentary also looked at the pitfalls of the COVID 19 tests, how overrated the lock-down measures really are, and how they inflicted even more damage.

One grisly aspect of the Corona “pandemic” in Germany was a call by a leading politician, Saxony Social Minister Petra Köpping, to admit persons refusing to go into quarantine to psychiatric hospitals. One vocal dissenter was even forcibly brought by the police to a psychiatric ward, something, Sebastian says, reminds him of “a very very dark chapter of German history”.

“That, I would have never imagined possible.”

Viewers approved of the video overwhelmingly, with over 20,000 thumbs up compared to 1,450 thumbs down. For example viewer Karin Steinbach commented:

“A great review of the facts and figures and social impact! Many thanks! As a scientist, I have long been horrified by the way in which we have been presented with ‘facts’ in this ‘pandemic’ and the way in which it has stirred up fears among the population – also in the media. Moreover, no scientific discussion is taking place at all.”

Other viewers are calling for special commission to investigate the whole panic.