By Kalte Sonne
(Translated/edited and image added  by P. Gosselin)

Stupidity clicks well in Germany. Alarmist messages about tropical storm Edouard now running through the Internet on numerous websites have been no better in quality than the earlier reports of an impending summer of heat shocks (The opposite has been true so far this summer).

On the other hand, reports like those by Fabian Ruhnau of Kachelmannwetter are beneficial, which assess former tropical strom Edouard somewhat differently, without neglecting the powerful thunderstorms:

“On Friday, a small, but rather weather-intensive low-pressure system will sweep over Northern Germany. It is ‘formerly EDOUARD’, the low was once a tropical storm, but is now just a normal low. In the run-up to the cold front, hot air reaches the south and southeast, where powerful thunderstorms can form. During the weekend the weather will calm down and get colder again.” 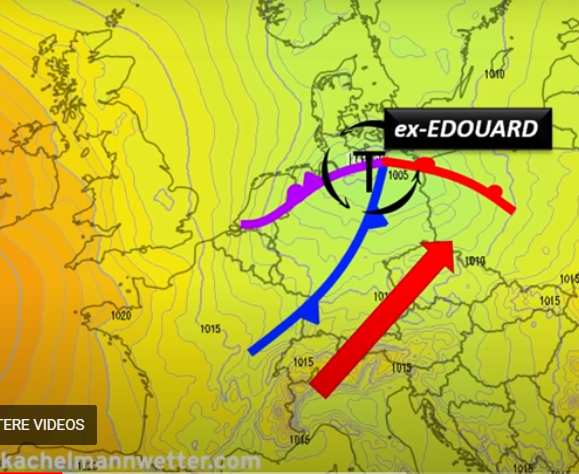 The kneejeck digital excitement and constant alarms are clearly a sign of our times. But a very dangerous one, because permanent alarm dulls the senses.