Browse: Home / 2020 / July / 13 / ‘Most Of The Globe’ Could Experience ‘No Warming’ For 30 Years Due To Temperature-Driving Internal Variability

A new study documents the dominance of internal variability in decadal-scale global temperature changes and suggests we may experience a global cooling trend during the next 15 or even 30 years despite rising greenhouse gases.

Maher et al. (2020) acknowledge that internal variability in global surface temperature variations is “a difficult concept to communicate” because we have very few observations of its impact and so we must rely on assumptions about how the climate system might work.

Those who try to explain how internal variability affects global surface temperature often use the “Butterfly Effect” paradigm; they assume that small changes now can lead to larger changes decades from now.

Because global temperature trends are “largely determined by internal variability”, global cooling or another warming hiatus could very well be observed over the next decade. Actually, as Maher and colleagues explain, “even out to thirty years large parts of the globe (or most of the globe in MPI-GE and CMIP5) could still experience no-warming due to internal variability“. 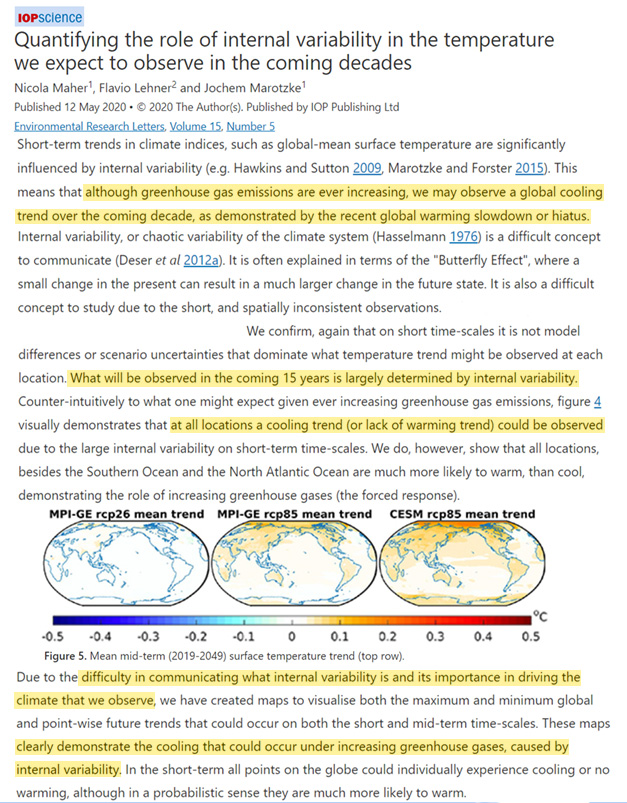