Germany has been seeing the opposite of the hotly projected “another record hot” summer the media blared on about earlier in May. Instead it’s been pretty cool this month.

Looking at the maximum temperatures reached so far this month at major northern Germany cities, today is the first for many to see readings finally hit the 80°F (27°C) mark.

Looking at the data archives at Kachelmannwetter.com here, we see that Hanover, Germany yesterday (July 18) hit the 27°C mark for the first time this month. July has been so cool that the Lower saxony capital failed to reach the 70°F (21.0°C) mark on 9 of the first 18 days. 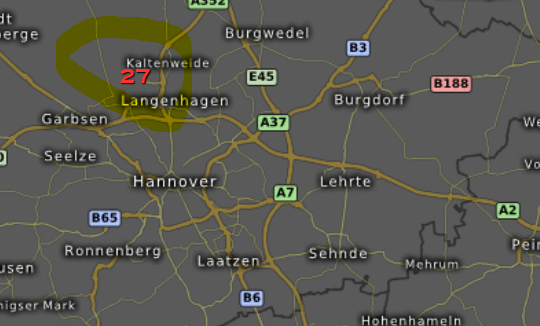 Yesterday, Hanover reached the 80°F mark for the first time this month. Image cropped from kachelmannwetter.com.

The port city of Hamburg has also seen one of its coolest Julys in awhile, with the temperature failing to reach the 80°F mark in July until today, July 19th, which so far has seen a high of 27°C (80.6°F).

On July 9th, the thermometer reached a high of only 14°C!

Also Osnabrück, at the station in Belm, the daily high never reached the 80°F mark in the first 18 days of July, first reaching the summery mark today for the first time this month. Here as well July has seen few summer like days, with the mercury failing to reach 70°F (21.1°C) on 13 of the first 19 days.

More cool weather in the forecast

Though the current weekend has finally reached the warm zone, across northern Germany, things are not forecast to stay warm over the coming week as more cold air is set to move in. https://kachelmannwetter.com/de/wetter/2910831-hannover