Browse: Home / 2020 / October / 09 / The “Warmest September Ever” Is A Myth… Cooler Times Likely Ahead As NASA Foresees Strong La Nina…

Our friend “SnowFan” here looks at the claims that September 2020 was the warmest ever recorded. It turns out that other measurement advanced satellites don’t agree.

According to the much ballyhooed data, temperatures in Europe in September this year were on average 0.2 degrees Celsius higher than in the previous record September 2018. The service providing the data is part of the European earth observation program Copernicus.

But the satellite data from the UAH and RSS both agree that this is not really the case! 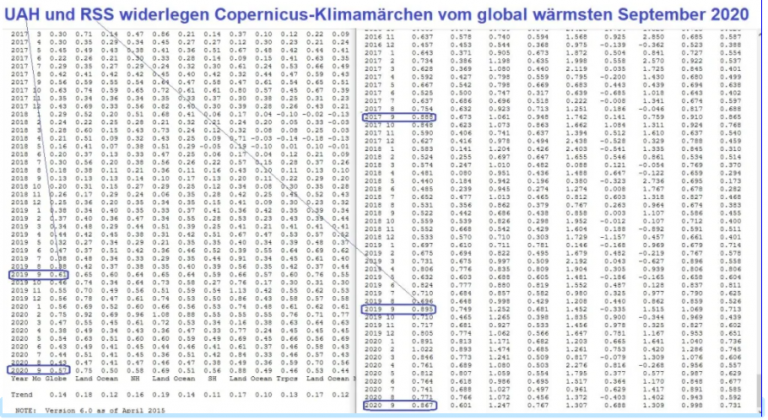 Above the global satellite data from UAH (left) and from RSS (right) in the tables clearly clearly show the monthly deviations from the WMO mean 1981-2010 (UAH) and from the climate mean 1979-1998 (RSS): September 2020 was not the warmest since satellite measurements began in 1979. At UAH, September 2019 was slightly warmer while at RSS even September 2017 was warmer.

Strong La Nina may be in the works

Overall the globe’s surface continues to cool since the peak of the 2015/16 El Nino, and that cooling will very likely continue if NASA and the US National Weather Service projections are correct. Both Agencies see a significant La Nina in the pipeline for 2021.

The current ENSO forecasts of NASA (left) and NOAA (right) from October 6, 2020, predict an unusually strong La Niña in the equatorial Pacific with temperature deviations down to -3°C and with unusually long duration until the NH summer of 2021. 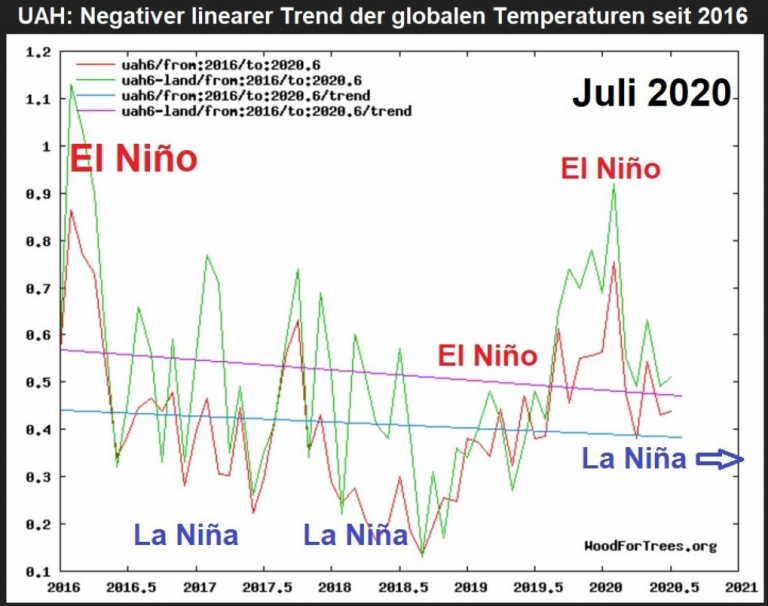