September mean temperature in Sweden has not been warming like alarmists said it certainly would.

Looking at data from the Japan Meteorological Agency (JMA) for the 6 stations with data going back 22 years, we see that 3 of 6 stations have seen cooling September mean temperature over the past 22 years: 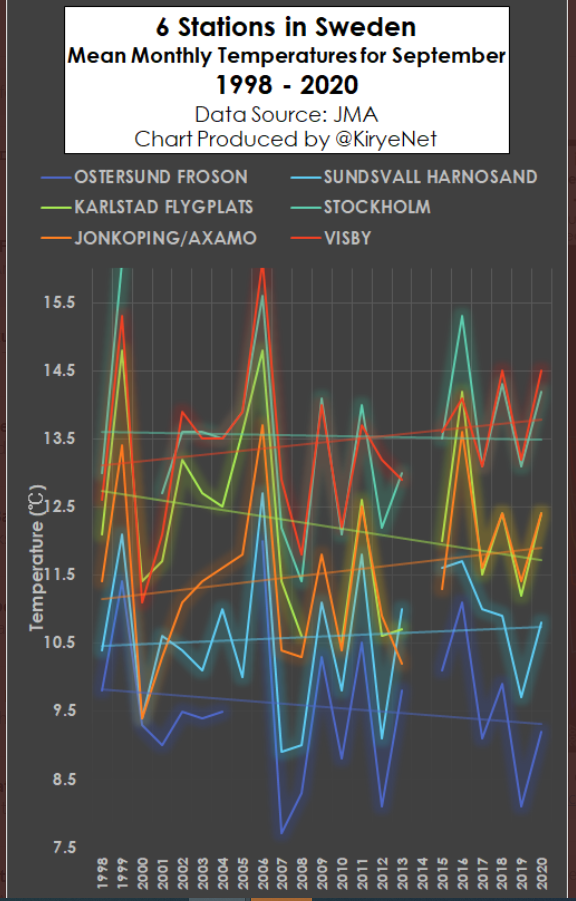 Europe on the path to societal/energy suicide?

On another note FORBES reported on Prof. Fritz Vahrenholt, the leading German climate science skeptic who I had reported on recently. Here’s an excerpt:

Let us move on to our second piece of evidence, this time from the other side of the “climate emergency” aisle.  Professor Fritz Vahrenholt is a giant among environmental circles in Germany. (The country is well known as the world’s leading champion for all things environmental and for pushing Europe to “net zero emissions by 2050”.) Prof. Vahrenholt holds a doctorate in chemistry and started his professional career at the Federal Environmental Agency in Berlin (responsible for the chemical industry) before joining the Hessian Ministry of the Environment. From 1984 until 1990 he served as state secretary for environment, from 1991 till 1997 as minister for energy and environment in the state of Hamburg.

One day before the publication of the Boston Review article on October 5th, Prof Vahrenholt stated baldly in a German TV interview that climate science was “politicized”, “exaggerated”, and filled with “fantasy” and “fairy tales”. He pronounced that “The [Paris] Accord is already dead. Putin says it’s nonsense. […] The Americans are out. The Chinese don’t have to do anything. It’s all concentrated on a handful of European countries. The European Commission in massively on it. And I predict that they will reach the targets only if they destroy the European industries.” He lambasted Germany as a country “in denial when it comes to the broader global debate taking place on climate science”. He went on to characterize Europe’s recent push for even stricter emissions reduction targets to madness akin to Soviet central planning that is doomed to fail spectacularly.”